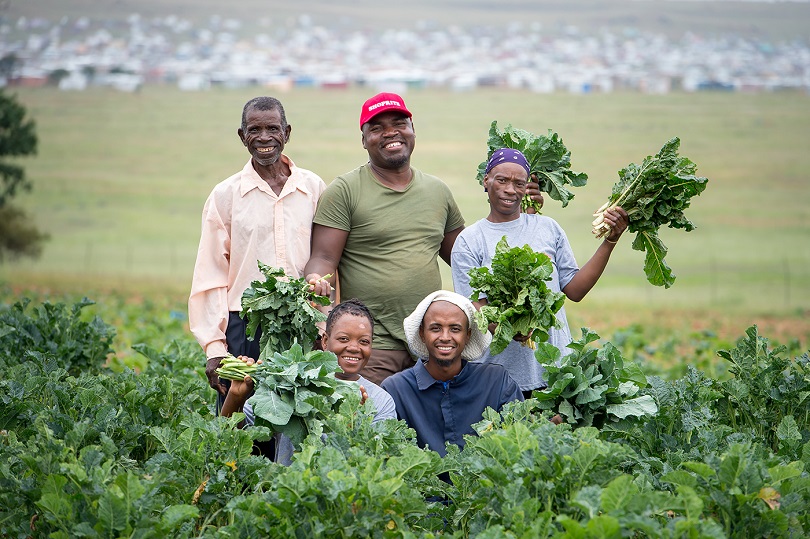 When a women-led cooperative of six farmers decided to join forces and pursue their love of agriculture together, they never dreamed that their passion would translate into job and learning opportunities for those living in a community close by.

Like so many passion projects, Kransvley Farmers’ Cooperative (formerly known as Ntirhisano) started small with a 300m² food garden that was run hands-on by the six members (5 of which are women). Recognising a gap in the market, they started cultivating indigenous vegetables that are favourite additions to many a traditional meal. Their efforts were concentrated on four specific crops: Chomoulier (also known as Covo Viscose or Rugare), Tshomalia (also known as giant rape), Muchina and Okra.

Within no time, their produce was in such high demand – mostly from informal traders operating in areas with a high concentration of residents from other African countries – that their success necessitated moving to a larger plot.

“This is a big market – there is perhaps an even bigger market for these kinds of vegetables than for cabbage and spinach – it just doesn’t have a big uptake through the chain stores yet,” explains Peter Moyo, Kransvley’s vice-chairman and the co-op’s only male member.

They acquired a 3ha piece of land in Lenasia and employed two people from the nearby informal settlement to work with them. Of course, along with increased production potential, the larger piece of land also came with its fair share of new challenges. Without access to municipal water, a borehole had to be sunk, after which they had to put irrigation in place and build storage facilities.

Aware of Shoprite’s support of similar community gardening projects, Moyo decided to get in touch with the retailer via the Act for Change Twitter platform (@weactforchange) and received a response within a few hours.

The Kransvley project was assessed by Shoprite’s partner, Food & Trees for Africa (FTFA), with the need for extensive irrigation listed as an urgent priority.

“FTFA just finished installing the 2ha irrigation system and it has solved one of our biggest worries,” says Moyo. “In fact, within a month of installing it, our production has gone up by more than three times and it will probably go about ten times within the next three months.”

It has also opened up job opportunities. From employing two people, they now have four working on the farm and expect these numbers to increase over the next few months.

“Truthfully, I don’t know if we’d be where we are if it weren’t for Shoprite and Food & Trees for Africa,” Moyo adds.