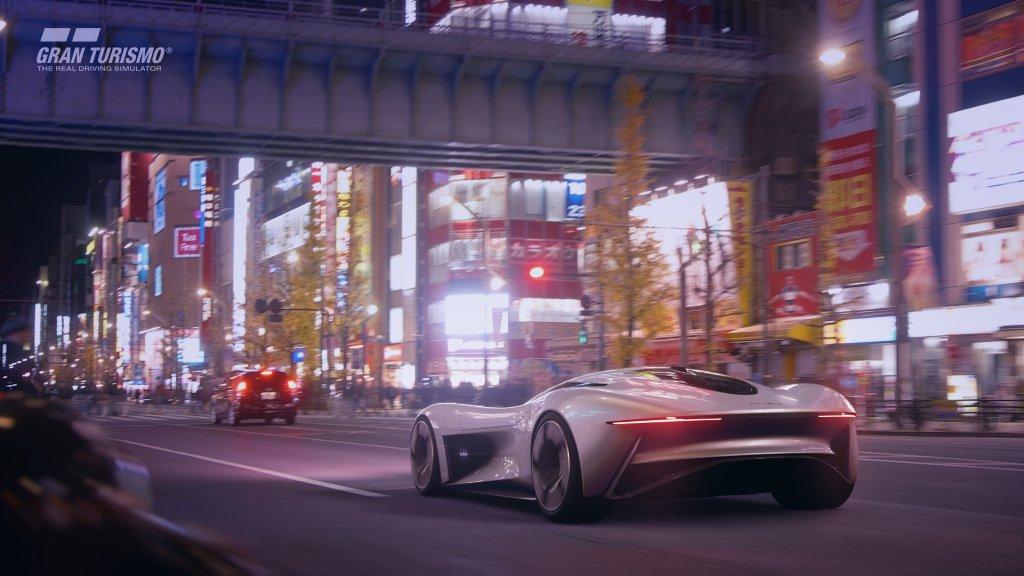 The all-electric Jaguar Vision GT Coupé has been designed and developed from the ground up taking inspiration from the brand’s incredible racing lineage.

Jaguar’s team of designers were given complete creative freedom to develop the perfect proportions and beautiful surfaces of this virtual Jaguar of the future.

Julian Thomson, Jaguar Design Director, said: “This project has been completely led by our young designers and represents a once-in-a-lifetime opportunity for them to create a vehicle steeped in our incredible heritage but pushing the boundaries of future design. The team have done an incredible job in creating something which is clearly identifiable as a Jaguar, inspired – but not constrained – by our iconic past.”

Providing gamers with 750kW of power, 1,200Nm of torque, a 0-100km/h time of less than two seconds and perfectly balanced handling, the Jaguar Vision GT Coupé will be on the starting grid for GT Sport fans from the end of November.

Kazunori Yamauchi, Gran Turismo creator, President of Polyphony Digital Inc., said: “We are delighted to today announce the Jaguar Vision Gran Turismo project. It was a great experience for us to work with Julian Thomson who is the new design director now at Jaguar. The design and performance of this car is a result of the team’s skill, craftmanship, and long years of collaborations together. We look forward to having drivers get behind the wheel next month.”

The influence of Jaguar’s rich racing pedigree is clear to see in the Vision GT Coupé’s assertive exterior lines and powerful, sculpted fenders which reflect those of the iconic Le Mans-winning C-type and D-type racing cars.

Where these heritage Jaguars pushed the boundaries of aerodynamics and braking technology, the Jaguar Vision GT Coupé features a deployable, active aero wing to optimise energy efficiency while generating the perfect amount of downforce.

Oliver Cattell-Ford, Exterior Designer, Jaguar Advanced Design, said: “This was the dream project for a car designer, creating a futuristic sports car for Gran Turismo means our designs and ideas could be truly limitless. It has to excite future generations and most importantly, look and feel unmistakably Jaguar.”

Beautiful shapes and purposeful proportions from three key cars in Jaguar’s racing heritage, the C-type, D-type and E-type, have influenced the form and graphics of the Jaguar Vision GT Coupé. Radical front fenders are reminiscent of the C-type, the epic plan shape is inspired by the ‘Long Nose’ D-type, and the fast and elegant cabin hints at the Lightweight E-type.

The virtual sports EV is crafted from experimental lightweight materials, with the light and stiff monocoque made from carbon-fibre composites and advanced aluminium alloys. This focused lightweight construction ensures the Jaguar Vision GT Coupé weighs just 1,400kg and delivers near 50:50 weight distribution.

The Vision GT Coupé is the first Jaguar to feature the iconic Leaper on the front grille. Elsewhere the historic references continue with the twin-charging sockets flanking the rear haunches, inspired by Jaguar’s revolutionary 1968 XJ saloon.

The interior of the Jaguar Vision GT Coupé has been designed to fuse Jaguar’s heritage with its contemporary interior philosophy of progressive luxury, purity, driver focus, and stunningly intricate details, all of which are allowed to breathe through the simplicity of the car’s design.

Chris Shaw, Interior Designer, Jaguar Advanced Design, said: “We’ve really pushed the limit to imagine how a future Jaguar sports car interior could look. The architecture is visually lightweight, simple, and dramatic; featuring advanced and experimental materials and finishes. Sitting in the stunningly considered cockpit and looking out onto the gracefully long bonnet of the Jaguar Vision GT Coupé – a view that is unmistakably Jaguar – the player will be fully immersed in the action.”

This selection of inspired details and inventive, innovative flourishes include hologram technology. The car features an on-board artificial intelligence system affectionately named “KITT-E” – a companion that would operate systems, and interface between the driver and machine to enhance the emotional connection with the car*. This technology can also display other useful information to the driver in a variety of formats, including three dimensional maps, and essential vehicle data.

The cockpit has been crafted to envelope the driver, creating a racing experience reminiscent of Jaguar’s Le Mans-winning D-types. It also features augmented reality digital side glass for enhanced vision either side of the car; the glass being able to highlight danger and obstacles, therefore increasing driver perception. Complimenting this, ahead of the driver is a transparent information cluster, displaying three-dimensional information inspired by iconic Smiths gauges, with rearward vision integrated either side in the screen’s simple wrapped design – all in perfect eye-line of the road ahead.

A unique soundscape has also been created to immerse the driver in a pure Jaguar racing experience. Led by the team responsible for the Jaguar I-PACE’s soundtrack, the Vision GT Coupé’s distinctive sound was created using brand new recordings of the 1957 Le Mans podium-finishing ‘603’ Long Nose D-type. Its race-spec 3.8 litre XK engine provides a unique layer, manipulated and woven into a futuristic and distinctive electric soundtrack.

To create the Jaguar Vision GT Coupé’s uncompromising racing performance the design team called on the same Panasonic Jaguar Racing engineers who lead the design and development of the brand’s I-TYPE 4 Formula E and I-PACE eTROPHY race cars. The car is powered by three powerful, compact motors – one driving both front wheels, the other two driving a rear wheel each – which together produce a combined 750kW and 1,200Nm. Players will be propelled from 0-100km/h in less than two seconds and on to a maximum speed of more than 321km/h.

James Barclay, Team Director, Panasonic Jaguar Racing said: “The opportunity to take what we have learned on the track from our time in Formula E and apply it to a futuristic Jaguar race car has been a great challenge for the Jaguar Racing engineers. With its all-electric motor design drawing on the technology from both the Jaguar I-TYPE 4 and eTROPHY race cars, we have accurately modelled the performance of the Jaguar Vision GT Coupé in the virtual world, creating a car that will be exhilarating to drive and a real threat to the competition.”

The Jaguar Vision GT will be available for players to download in Gran Turismo Sport for the Sony PlayStation 4 from the end of November and will first be driven by competitors in the latest round of Sony’s Gran Turismo World Tour event at the Tokyo Motor Show, Japan, from 26-27 October.