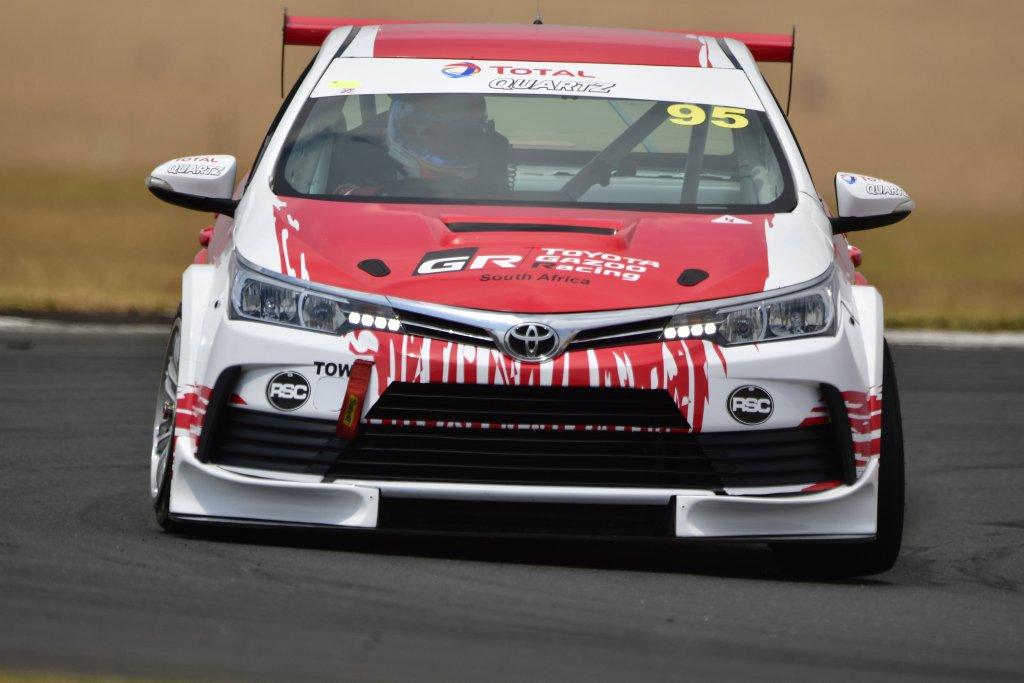 Brian Joss – It was a bittersweet racing weekend for Toyota Gazoo Racing SA’s Michael van Rooyen at the final round of the 2019 Global Touring Car (GTC) championship, held at the Red Star Raceway near Delmas.

The Toyota Corolla driver was tied for second place on the points log, just two points behind the leader, Volkswagen’s Keagan Masters.

“It was always going to take an exceptional performance, but we went to Red Star aiming to win the title,” said Van Rooyen after the event. “We were well-prepared, and quickly got to grips with the new-to-us circuit during Friday’s practice. But a tough qualifying session put us on the back foot from early on.”

Qualifying, which took place early on Saturday morning, saw changing weather conditions, with the bulk of the field posting their fastest times on wet-weather tyres. However, the times tumbled toward the end of the session, and the crews scrambled to fit slicks and adjust setups, as the track dried out quickly. In the end, BMW driver Robert Wolk claimed pole position, with Van Rooyen relegated to sixth place on the grid.

“It was disappointing for us, but even more so because Keagan qualified in second place, and we also had Simon Moss in third place, ahead of us on the grid. So, there would be lots to do during Race 1,” said Van Rooyen.

There was a glimmer of hope, when Audi’s Simon Moss tangled with pole setter, Wolk, on Lap 2 of the race. This removed at least one of Van Rooyen’s title rivals from the equation, but at the same time, Masters used the opportunity to secure the win. Van Rooyen’s charge through the field was frustrated by the deployment of a safety car, which lasted five laps – and despite pushing hard in the remaining laps, the Rustenburg Rocket had to settle for a third place.

A quick calculation revealed that, for Van Rooyen to still take the title, he needed to win Race 2 – with Masters finishing fourth or lower. As expected, the Toyota Gazoo Racing SA driver came out swinging, pushing for the win from his third place on the starting grid.

Van Rooyen surged past Tschops Sipuka (Audi), and quickly closed the gap to Volkswagen’s Daniel Rowe. After a brief tussle, which resulted in contact between the two cars, Van Rooyen edged the Volkswagen to take his maiden GTC victory.

Despite the heroic charge by Van Rooyen, Masters finished the race in third place – earning enough points to stay ahead of the Toyota Corolla driver, and claim the 2019 title by two points.

“It was a highly entertaining race weekend, if disappointing not to win the championship,” concluded Van Rooyen. “But to finish in second place on the log, just two points adrift is still a great achievement, especially given the extremely competitive racing that we’ve seen in the GTC championship.”