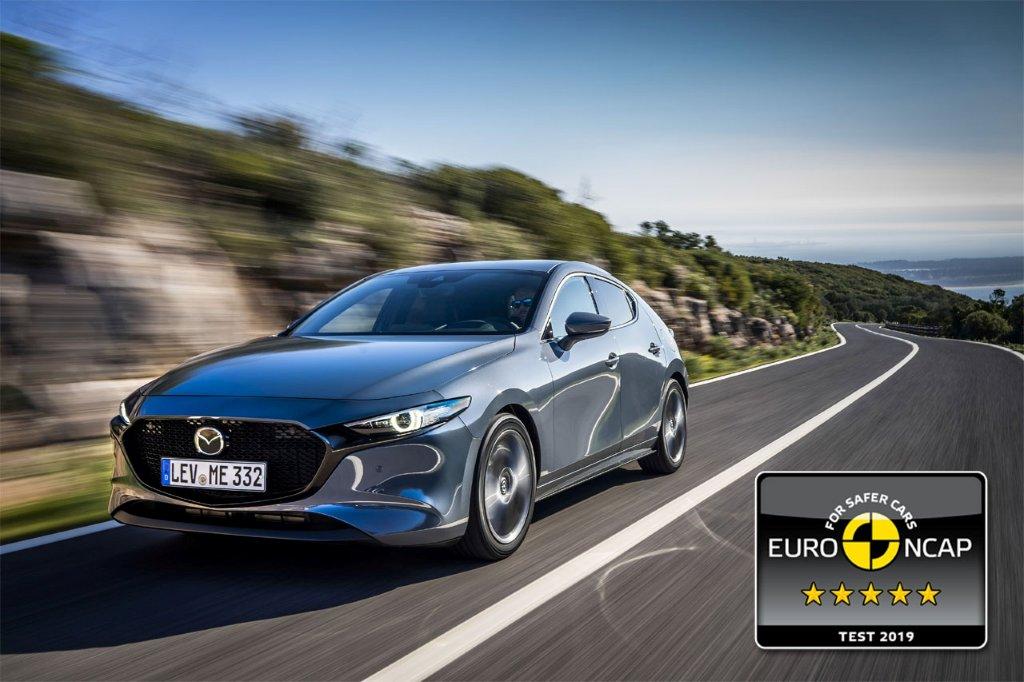 Brian Joss – Many motorists who drove up alongside me gave the thumbs up to the car I was in.

It hasn’t happened for a long time but the new Mazda3 hatch which I had to play with for 10 days or so is an attention-grabber. Parked at a mall one morning I returned to find a cluster of people admiring its sleek silhouette. I was driving the flagship 2 litre Mazda3  Astina six-speed automatic which is packed with features that are standard in some premium German brands.

This month Mazda marked five years since its divorce from Ford and in this short time it has grown sales by almost 70% increasing from 4 500 units sold in 2014 to more than 14 500 in 2018. It also introduced its lifetime parts warranty, a first for the industry, and a three-year unlimited kilometre factory warranty. Most of the Japanese car-maker’s products have improved beyond recognition. Although the company always delivered a good vehicle, it was under-rated by South Africans who have always been a bit snobbish about their wheels. But since the split Mazda has come out of Ford’s shadow  to stamp its own authority in the motoring marketplace.

From the moment you climb into the Astina you feel right at home. You don’t have to fiddle much to find a comfortable driving position, thanks to the 10-way adjustable driving seat which offers excellent support. I didn’t feel achy or stiff after a long drive around the Peninsula which took in Stellenbosch, Hout Bay and some of the leafier suburbs. As a bonus the armrests for the driver and passengers are padded

Everything in the cabin is focused on the driver. From the clear head-up display which shows the speed limit zones you’re travelling in to the new  8.8 inch infotainment screen which is controlled using the rotary knob on the central console. Best of all it’s easy to use and I found it to be a much better proposition than the often temperamental touchscreens fitted to other makes I have driven. There’s Bluetooth and an audio connection. Standard is Apple CarPlay and Android Auto. A new leather wrapped steering wheel with illuminated controls and switches give a luxury touch. Along with keyless entry there is a  push-button starter and an electronic parking brake. The cabin has an uncluttered and spacious feel about it and all the information a driver needs is almost instantly available.

There is plenty of leg space for back seat passengers and only very tall people would probably be affected by the lack of headroom because of the sloping line. On the other hand you can always open the sunroof for them.

One drawback is the blind spot created by the C-pillar and with the hatch’s small back window makes it hard to see over your shoulder, another is the intermittent hunting in the torque-converter automatic transmission.

What’s it like to drive? if you’re expecting a pocket rocket to match the sleek look of the hatch you may be a bit disappointed. The Astina  2 litrel doesn’t have a turbo and for the time being there is no diesel power train. The engine is perky and with power to spare so you can overtake safely when the need arises. The engine is relatively quiet although in Sport mode it’s noisy.

The test route was quite a challenging one with plenty of curves and sharp corners that the front-wheel drive took in its stride. It also sucked up the bumps in the road with relative ease thanks to the soft suspension. It’s a comfortable and refined drive, but you won’t burn rubber at the off.  The Astina is fitted with a six-speed automatic torque-converter transmission and I experienced some hunting. But not enough to worry about. A torque-converter is the “clutch” in a car with automatic transmission. It uses fluid to send power to the transmission, it stops the engine from stalling and allows the gears to change on their own without any help from the driver.  It looks a lot like a doughnut.

The 2 litre Astina delivers 121kW and 213Nm and it’s not a fuel sipper. Mazda claims 6.2l/100km which is substantially lower than my figures of nearly 8 l/100km in all sorts of driving conditions.  With some judicious driving and on the open road you could get 7l/100km. The hatch can swallow 295 litres of luggage or shopping. so not exactly cavernous.

While the seventh generation Mazda3 incorporates the much-vaunted Sky-Activ technology, South Africa won’t be seeing the Skyactiv-X, a compression-ignition petrol engine, which, says Mazda,  blends the best aspects of petrol and diesel power plants to make it up to 30% more fuel efficient than a regular petrol engine. The main reason is that our fuel is not up to scratch.

Mazda has also developed a new exterior paint –  Polymetal Grey –  to give the hatch the appearance of metal with glossy smoothness.  I must say, though, that I prefer Mazda’s trademark red. The hatch has black roof lining and 18 inch black alloy wheels to add an extra touch of class.

Bragging rights for safety features include seven airbags, ABS brakes, hill-start assist, and stability control, standard throughout the range. The Astina gets a  blind spot warning and rear cross-traffic alert. As a matter of interest Euro NCAP gave the Mazda3 a maximum five-star rating earlier this year.

Summing up, the Mazda3 Hatch 2 l  Astina AT has loads of appeal, it’s an enjoyable and comfortable drive, it’s a bit thirsty, but there’s a glimmer of light amid the gloom. Next month, according to the AA,  petrol is set to decrease between 8c and 18c a litre,  the boot is slightly smaller than its predecessor, CO2 is 146 g/km, and then there’s the price: R474 000 including a three-year/unlimited km service plan and roadside assistance.

The high price tag may make would-be buyers think twice before signing on the dotted line. However, the Astina Hatch is packed with spec and tech that gives you plenty of bang for your buck and will make you the envy of your friends who drive some of the premium brands where the standard features in the Astina are optional extras, in the Audi A3 and the BMW 1 Series, for example.

The Astina is competing in the very tough C-segment of the market and I am convinced it will more than hold its own.