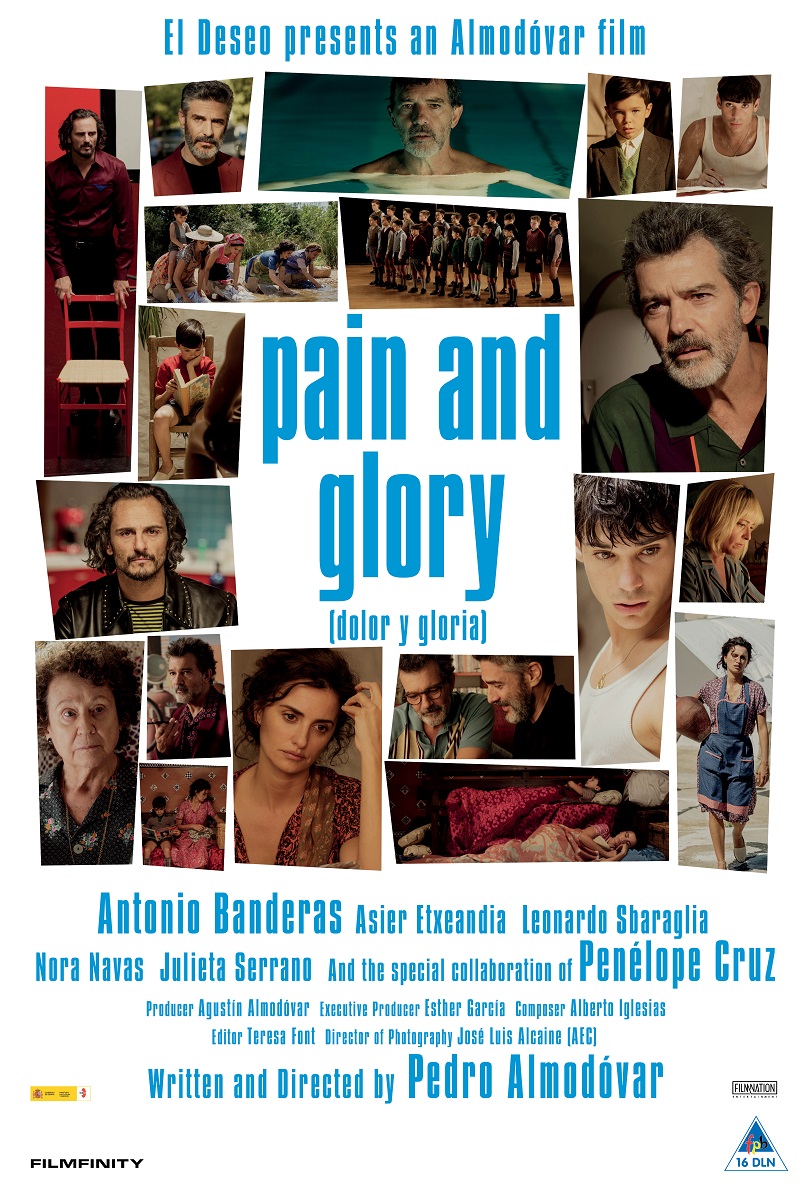 The acclaimed Spanish filmmaker Pedro Almodóvar’s latest film – a tale of memory, regret and making peace with his past – isn’t just his most personal, it is also one of his greatest.

PAIN AND GLORY blurs the line between art and life and mixes autobiography with fiction to powerful effect. As the title suggests, the result is a swirl of heartbreak and joy.

Antonio Banderas gives the performance of his career as the aging filmmaker and onetime provocateur Salvador Mallo – a role for which he was outfitted with Almodóvar’s colourful shirts and high-tops. Sporting a salt-and-pepper beard and a shock of hair (not unlike Almodóvar’s), the actor seems to shrink and grow simultaneously, perfectly capturing both the strengths and weaknesses of his character.

Salvador is afflicted by multiple ailments, the worst of which is his inability to continue filming. Racked by pain, both physical and metaphysical, he has retreated into a depressive cycle. Explaining the reasoning behind this, the director said: “I know very intimately the fear that you might not be able to shoot because you’re not in the shape that it requires.”

A chance meeting puts him back in touch with an old collaborator, Alberto (Asier Etxeandia), who became estranged from Salvador during the making of their last film due to his drug addiction. Alberto hasn’t fully kicked his heroin habit, but it’s Salvador who is more at risk of falling into the lap of addiction. The pair’s newly rediscovered friendship is tested after a disastrous – and hilarious – drug-fuelled appearance at a screening of an old film of theirs.

After sneaking a look at a confessional monologue on Salvador’s laptop, Alberto convinces Salvador to let him perform the monologue as a one-man play. Salvador agrees, on the condition that he is not credited as the writer. This simple action sets in motion a chain of events which prompts a remarkable and tender reunion.

Fundamentally, PAIN AND GLORY has two tracks: The present, in which Salvador makes amends with Alberto and then promptly gets hooked on heroin which, mixed with his painkillers and generous helpings of alcohol, makes him drift further and further into his memories – the second track of the film.

The flashbacks gradually reveal Salvador’s childhood with his mother, Jacinta (beautifully played in the flashbacks by Penelope Cruz), in their meagre, cave-like rural home. Special mention is due to Julieta Serrano, who magnificently presents Salvador’s mother in her 80s. In a moment of pin-sharp, bittersweet perfection she tells Salvador offhandedly that he was never a good son.

The present day and flashback sequences are linked through a white and red colour scheme which dominates PAIN AND GLORY’s mise en scène. The film offers blocks of highly choreographed colour that have become Almodóvar’s trademark and is as visually striking as any movie the director has ever made. In addition, the narrative is elegantly structured and the tone contemplative. Alberto Iglesias’s lovely score perfectly matches the shifting tones of the film – from the warmth of the early childhood scenes, to the poignancy of Jacinta’s last days and the tensions and anxieties of Salvador’s life. All of this adds up to a richly satisfying work from a filmmaker whose love of cinema, in all its pain and glory, shines through every frame.

PAIN AND GLORY is a study of acceptance, revelation and reconciliation; it is about cinema’s relationship with the past and its power to reshape memories as a means of coming to terms with it.

The film, which will be showcased at the European Film Festival from 27 November to 8 December, is Spain’s official entry for the Foreign Language Film category at the Academy Awards. It has also won two Cannes Film Festival Awards – Best Actor (Antonio Banderas) and Best Composer (Alberto Iglesias).

PAIN AND GLORY is distributed by Filmfinity (Pty) Ltd. and will be released in South African cinemas on 6 December 2019.