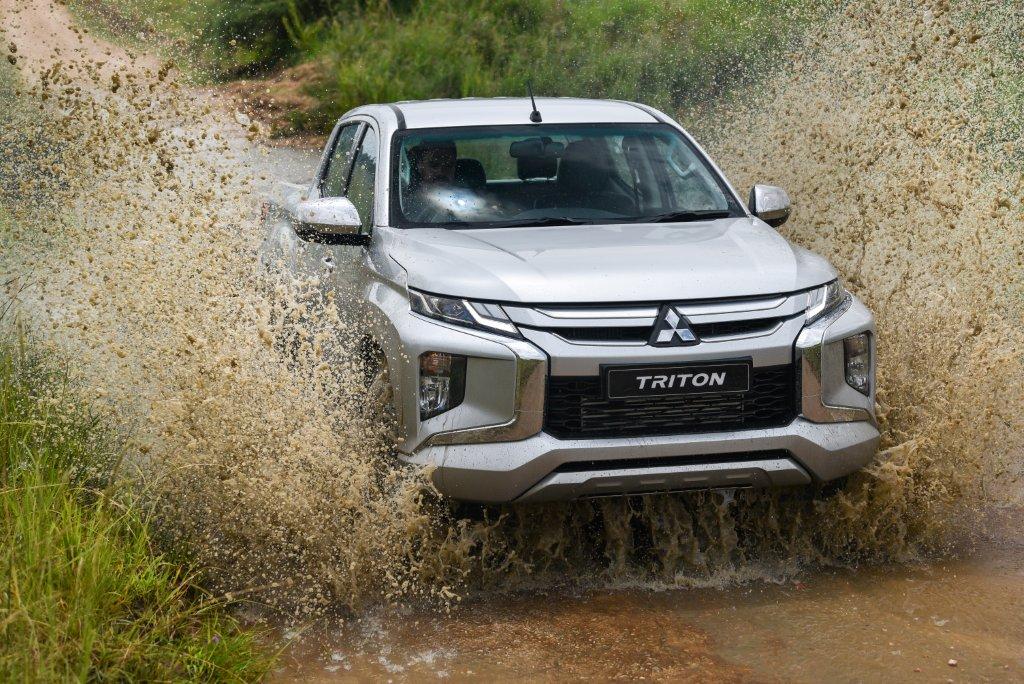 Brian Joss – In the year dot a bakkie was a bakkie. It was a “bak” on four-wheels with a stick-shift or the gear lever was on the steering column and you could reverse, go forward and if you were lucky your bakkie had a first, second and third gear.

The ride was bone-jarring, to say the least:  if you hit a pothole in the road, your head would hit the roof with a thump. The old bakkie was a reliable workhorse, popular with bricklayers, plumbers, electricians and small businesses who had deliveries to make. You could also use it for the odd fishing trip in the bundu, and you could usually navigate some of not so rough stuff with ease, without a 4×4  system.

When you bought a bakkie you knew what you were buying – wheels to help you transport goods from A to B. But not as the family runabout, unless you squeezed everyone in the back of the bak. But it was also dangerous, especially if it didn’t have a canopy.

Mitsubishi’s new Triton, the 2.4 litre Di-DCA  AT 4×4 shows just how the “bakkie” has evolved. The big and brash double cab has all the comforts of home and quite a bit of tech. Apart from the cosmetic changes , among then a new grille, that Mitsubishi calls a “dynamic shield” which we saw on the Pajero Sport, and which helps to make the Triton a stand-out in a crowded marketplace, the 2.4litre engine has been tweaked, a lot, and the five-speed automatic has been replaced with a six-speed auto gearbox.  The Triton has always been known for its off-road ability and the new model is no different. It is fitted with the Super Select II 4WD system and you can easily switch from rear to four-wheel drive, it features a  low-range transfer case and a rear diff lock. There is a new off-road mode with settings for mud (and snow, useful if you’re in the Matroosberg in the dead of winter), sand and rock. A welcome extra is hill descent control.

The double cab is fitted with a turbocharged diesel which delivers 133kW and 430N.m of torque and for such a big motor it’s surprisingly economical. You don’t expect touches of luxury with a workhorse. But the Triton is a lifestyle vehicle at heart so you get leather seats, an electrically adjustable driver’s seat, a rear view camera and a keyless operating system. Not to mention Bluetooth with hands-free control, a top-notch updated infotainment system, the same one used in the Eclipse Cross,  with Apple CarPlay and Android. There’s also dual-zone climate control, a vast difference from the bakkie of old, where, if you wanted aircon, you’d have to open both front windows. Often the puff from the carmakers is just that,  PR speak. However, Mitsubishi’s promise that the motor is primed for “optimal balance of engine power. fuel economy, smooth acceleration at low engine revolutions” and a quiet cabin, isn’t hot air. The Triton delivered and the ride was almost on a par with the Eclipse Cross (The Gremlin, May 22), although there were a few shaky moments over some really bad tarmac. After all it is a bakkie, although a five-star one, you can’t expect a sedan like drive. The Triton is no slouch when it comes to towing. The 4×4 has a 3 100kg towing mass (braked) rating. Which also means that you can use it in business to move big ticket items like refrigerators; stoves, and the kitchen sink, if needed. I can just picture it hauling great logs of timber with consummate ease.

The fifth generation Triton (The Gremlin, April 26 2017), which used to be the Colt handled like a SUV, I noted at the time, with a ride to match.

The new Triton is made for the open road and of course, the bundu. The automatic gearbox is smooth, and there is a manual override to allow you to use the shift paddles, which you may need when you’re going bush. It probably won’t be necessary, though.

When I drove the forerunner two years ago I wrote that you could steer using finger-tip control.  The same applies to the new Triton. The steering is light and with its small turning circle of 3.5 metres makes it easy to squeeze in to a city parking bay. The light steering also makes it nimble in heavy traffic and there doesn’t seem to be as much body roll as the Ford Ranger (The Gremlin, April 2 2019). The Triton has a lot of torque and you can shift from 2-wheel drive to four-wheel drive at speeds of up to 100km.h, Mitsubishi said.

In a nutshell, the attention-grabbing new Triton 2.4 litre Di-DCA  AT 4×4 has it all in spades: it’s comfortable, brilliant to drive on the open road, nimble in the city streets where thanks to the light steering it’s easy to park. Although it is  up against some tough competition including the Ford Ranger, the Toyota Hilux and the Nissan Navara,  if you’re looking for a lifestyle vehicle you should put it high on your list. As a bonus it also delivers on all fronts as a workhorse. The new Triton includes a warranty of three years or 100 000km and a five-year/ 90 000 service plan and five-year unlimited roadside assistance. It carries a price tag of  R599 995 which is less than some of its rivals.