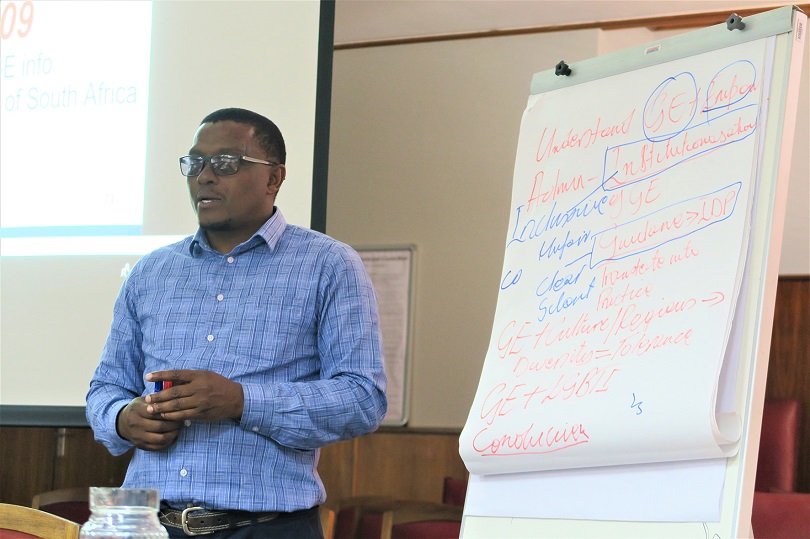 The Commission for Gender Equality (CGE) presented a programme about Gender Mainstreaming (equality, empowerment and transformation) on 7 and 8 November to Garden Route District Municipality’s (GRDM) council and administration.

The objectives of the programme were to provide support, to advise and capacitate GRDM about issues of gender transformation. The Commission is a Chapter 9 Constitutional Human Rights State Institution, which seeks to ensure a drive towards the successful implementation of the United Nations Sustainable Development Goal relating to Gender Equality (5th goal). South Africa and all other participating states have to localise this goal by defining, implementing and monitoring strategies at a local level to achieve targets.

Leonard Macakati, an Educator from The Commission for Gender Equality presented the Gender Mainstreaming Programme. During his presentation, he specifically emphasised the importance of Gender Forums within municipalities. He then debunked the myth that many believe Gender Forums should consist of only women. “Gender Forums should include people of all genders, disabled people, members of the LGBT community and youth,” he said.

Macakati later shared the goals of Gender Mainstreaming, which are to:

Once gender equality issues are included in Integrated Development Planning processes, budgeting, service delivery/policy implementation, reporting, monitoring and evaluation processes, it will help municipalities achieve gender-mainstreaming goals. Attaining these goals will ensure that there is a shift in each municipality’s culture – making everyone more gender-sensitive.

The Employee Assistance Practitioner of GRDM, Ms Shandré Abrahams, who is also one of the key drivers of Gender Mainstreaming at GRDM, after the two-day session, said: “Many employees expected the workshop to only focus on women, but in actual fact, gender is a multidimensional concept and gender has many dimensions or facets related to each other in multiple ways.”

Later this month on 25 – 26 November 2019, GRDM, in collaboration with the South African Police Service and the Western Cape Government Department of Community Safety will host a Gender-Based Violence and Femicide Summit in George. Stakeholders will formulate an actionable plan to combat and eventually try to reduce social ills facing society.

Caption: Leonard Macakati from the Commission for Gender Equality presented a Gender Mainstreaming Programme at Garden Route District Municipality on 7 and 8 November 2019.