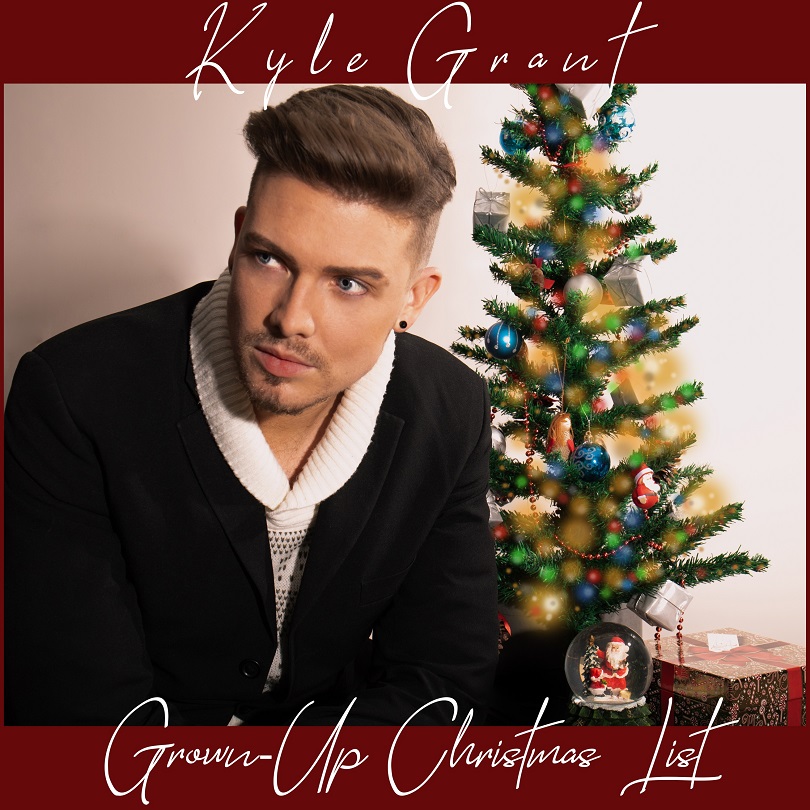 There are a number of musicians who have been critically and commercially lauded for their solo work after achieving initial success as part of a group. With the release of his new single – a Christmas ballad titled GROWN-UP CHRISTMAS LIST – Kyle Grant is set to join their ranks.

GROWN-UP CHRISTMAS LIST, which was first released in 1990, is an inspirational ballad addressing Father Christmas from an adult’s point of view. Recorded and produced by Hugo Ludik for Muse Productions, it is the singer’s first solo release after the disbandment of the pop trio ADAM.

“The song is a list of heartfelt wishes for the human race,” explains Kyle. “I heard it for the first time when I was on holiday in the USA as a teenager. I remember being touched by the message. However, I have never heard it on South African radio. I strongly feel it is a message that all South Africans need to hear right now.”

With several singles slated for release during the festive season, Kyle believes that GROWN-UP CHRISTMAS LIST will resonate with listeners as it is honest and relatable.

“I am a very sentimental, deep and empathetic person. To me, honesty is the most important part of being a singer. One has to be inspired in order to truly inspire others,” says Kyle. “I honestly believe that this song needs to be heard by South African audiences.”

GROWN-UP CHRISTMAS LIST is not the artist’s first solo single – he had great success with an original song called I Want It To Be Me, which was released when he was just seventeen years old. Of course, he also achieved a gold status album and numerous number one singles (Goud, Hoogtevrees, Sal Oorlog Vir Jou Maak, Sê My, Say What You Want, How, Vergifnis, Kalmeer) on various radio stations as a lead singer of the acclaimed male music group ADAM.

Music undoubtedly runs in Kyle’s blood. “My parents were both professional corporate musicians and my grandmother was an opera singer. Music is my truth and my escape. It is my only true form of expression,” he says.

In addition to actively having worked in the music industry for sixteen years, the entertainer has acted on television and stage. He played leading roles in international touring musicals Dirty Dancing and High School Musical, as well as lead roles in several local premier productions. As an actor Kyle has starred in Egoli, Backstage and Getroud Met Rugby, among others. However, the highlight of his impressive career to date, he says, was winning a South African Music Award (SAMA).

Kyle is inspired by real-life situations and stories. “People are always looking for something that speaks to their soul in order to feel less alone,” he muses. This sentiment ties in with his alternative career choices – if he wasn’t a musician, he says, he would be a psychiatrist or counsellor.

“I am a vocal coach, and I feel that half my lessons are spent listening and nurturing my students. It is something I have a knack for. I am a good listener and I have been through a lot in my life. So, I like to help and guide others when I can,” he says.

While Kyle appreciates all genres, and have favourite artists in each, he lists Frank Sinatra, Boyz II Men, Sting, Ard Matthews and Chris Chameleon as having the biggest influence on his style. And, while he can’t divulge any details, he says he is planning several collaborations with some of his favourite artists in the near future.

Commenting on his decision to pursue a solo career after ADAM, Kyle says: “Through all the highs and lows of the entire experience, I found my true self at the end. It taught me what I want and what I don’t want out of life.”

His future plans, on a personal level, include starting a family with his wife. Professionally, he says, he will continue singing, writing and pursuing his passion for music. With this in mind, GROWN-UP CHRISTMAS LIST is an incredible way to launch the next chapter of his career.

This song is now available on all digital platforms here: