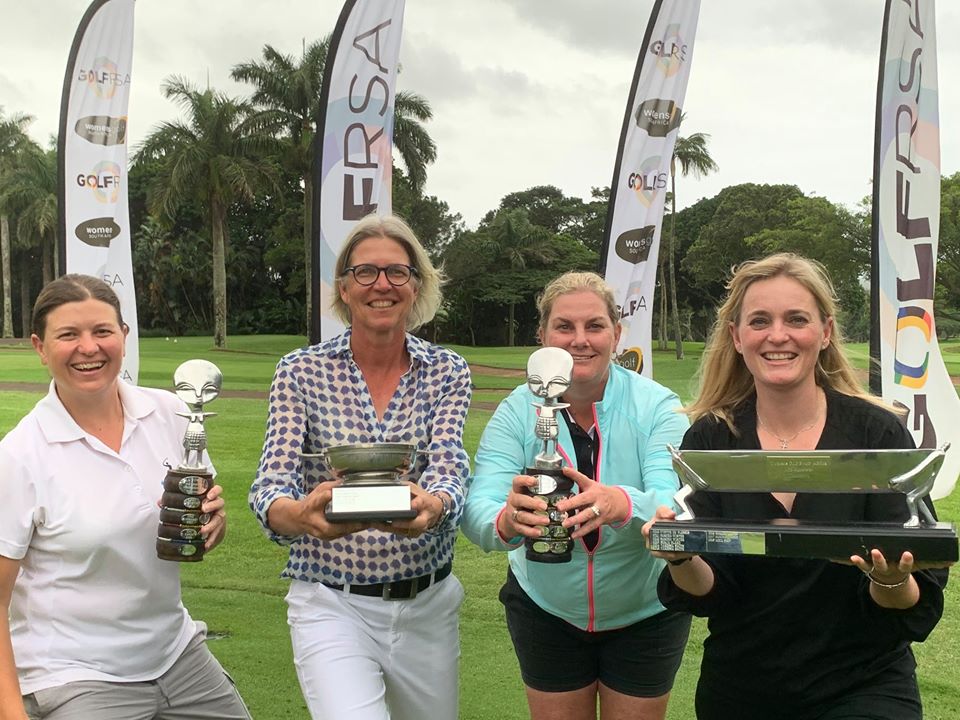 Traut won by eight shots on six-over 150 after carding rounds of 72 and 78 in the weather-reduced 36 hole tournament.

“To come out to the course where my golf career first started and to win the championship on debut is incredibly special. And to have my parents here to see me win, was the cherry on top,” said Traut.

“My dad got me started when I was about 10, but I wasn’t really interested in golf then. He was the one who convinced me to join them in a competition at Strand Golf Club when I was 22. I really enjoyed myself and agreed to go on a mini-golf tour with him, my mom and my brother.

“Our first stop was Selborne and it was here that the bug really bit me. My mom inspired me to start playing golf seriously, and now here I am, holding the trophy. This is very, very special.”

In-form Traut beat some of the country’s brightest talents to lift the 37th Ackerman Championship title in October and headed to KwaZulu-Natal as one of the tournament favourites alongside former champions Sandra Winter, Sonja Bland and Vanessa Smith.

She lived up to her billing when she opened up a five-shot lead in the opening round.

“It rained really hard when we arrived in Selborne and we were all hugely disappointed when they were forced to cancel the first round. The first round teed off with clear skies but a three-club wind. It was tough, but I managed to roll in a few birdie putts for a level par 72,” said Traut.

“Knowing that they like to tuck the pins on the final day, my strategy was to try and keep it in play; I just tried to hit fairways and greens and two-putts for pars,” she said.

“The set up was definitely more difficult and we all found the going tough, but I did manage to hit some really good shots to keep the round ticking over. I had a couple of bogeys on both loops, and I finished with a double, which was disappointing, but I pencil at least one birdie on my card.

“This was the first year that I competed in the SA Women’s Mid-Amateur and I want to encourage all mid-amateur golfers to enter. It is a terrific event. The camaraderie and spirit among the players is extraordinary and with three divisions, there is no reason not to compete. I am so grateful that my husband and children encouraged me to enter. I will definitely be back to defend my title next year.”

Gauteng North golfer Gina da Silva (80-78) finished second on 14-over and 2013 champion Bland from Southern Cape was a further stroke back in third.

Bland from Fancourt also lifted the LGU Quaich Senior Trophy for a second time with rounds of 77 and 82.

Kerry-Anne Murgatroyd was absolutely floored by her unexpected success in the B-Division.

“I was six shots behind the leaders after shooting 90 in the first round and I teed off in the third group on the final day, so I was not expecting to win,” said Murgatroyd after her four-shot triumph on 173.

“I turned four-over after a solid front nine, but the back nine was up-and down. I made three pars to finish with an 83 and I think it was the finish that did it.

“The conditions were pretty tough and I never expected to win, so I am thrilled. Thank you to Womens Golf South Africa for hosting a fantastic event. I love the mid-amateur tournament and for everyone who have not played this championship, you should really join us next year,” said the Centurion Country Club golfer.

Wendy Fouche from Mount Edgecombe (93 84) and Lindsay Owen from Country Club Johannesburg (85 92) tied for second on 177.

Janine Meyburgh was the third first-time winner with a one-point victory in the C-Division.

The Cathedral Peak golfer posted 30 in the first round of the Modified Stableford competition and carded 32 in the final round to edge out early leader Cecelia Verster from Port Shepstone.

“I was extremely nervous starting the final round, but I had a really nice front nine. The back nine was up-and-down, but I am so proud to have won. This was such a great experience and I can’t wait to do it all over again.”

Verster (29 32) had to settle for second, and finished three points ahead of fellow Port Shepstone golfer Jenny Hulley (28 30) in third.