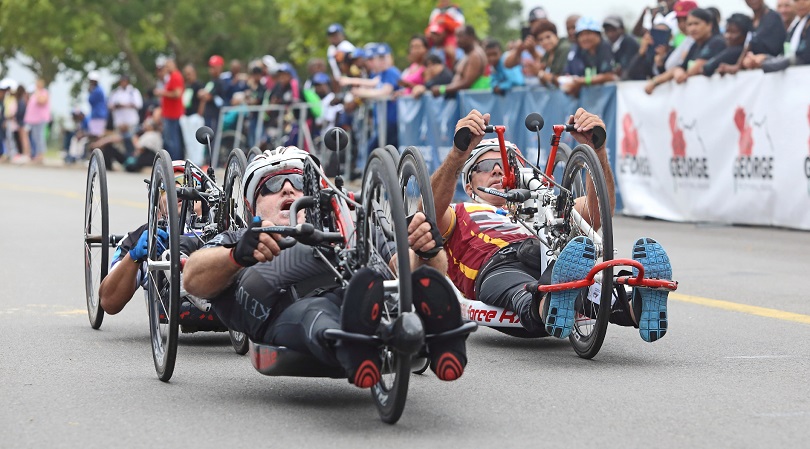 The pitching event was, on Thursday 14 November,  to the judges by the Event Director, Alewijn Dippenaar & Alwyn Uys, 42km athlete.

In his pitch, Alewijn Dippenaar outlined the history of the event from its humble beginnings in 2002 at which 27 athletes raced down the Outeniqua Pass to it becoming the only event of its kind that’s exclusively staged for disabled athletes, attracting many world-class cyclists from across the globe.

Dippenaar also spelled out the involvement of the Disabled Road Race Foundation (DRRF), which was established in 2004 with the purpose of organising the OCC.  Great emphasis is placed on the safety of the athletes with over 500 volunteers and Traffic Officers from the George Municipality involved on the day.

Between 2013 and 2018, over 1 000 athletes took part in the event every year.  The 2019 event was initially canceled due to a sponsorship issue but later reinstated largely due to the dogged determination of the organisers and the public.  The event date clashed with a major international event which ruled out a few of our loyal competitors, yet the event still attracted close to 500 athletes from as far afield as Ghana and Zimbabwe.

Sponsorship for the 2020 event will once again be handled by the DRRF and audited by Mazars.  Full disclosure of Sponsorship funding is provided to the Sponsors to ensure transparency.

According to Newsclip Media Monitoring, the 2019 event managed to generate an estimated media value of R3 371 320!

The organisers are determined to almost triple the prize money for the 2020 event to R300 000.  This will attract many international world-class athletes and significantly raise the event’s profile.  The event offers an exciting advertising and promotion opportunity.  The organisers are looking for a title sponsor giving the Company all the requisite advertising exposure like naming rights among others.  There are many other opportunities, including smaller sponsors.  Contact the organisers for details.

Dippenaar congratulated all those involved saying that this was the cherry on the top of 17 years of hard work, the community working to ensure the success of the OCC 2019. The Pitching Competition is run annually by the Premier, Alan Winde’s office.  The following four criteria are taken into consideration:

George has a huge heart for those less fortunate with many schools and other institutions catering to their needs.  The city is setting the pace in South Africa when it comes to the emphasis placed on making George as wheelchair-friendly as possible.

The Outeniqua Chair Challenge attracts athletes from all nine provinces as well as from the rest of Africa and abroad.  Thousands of visitors descend on the Garden Route, not only having a significant economic impact (estimated to be in the region of R3 million) but also raising awareness of the needs of disabled persons.  As a result, the Garden Route has become a premier destination for the disabled. This assists athletes with costs related to accommodation and transport and caters to participants competing in a wide range of racing chairs and handcycles.

The success of the event is underscored by four factors:

In conclusion, Dippenaar said, “The event is about Ubuntu – making a difference in the lives of others.  Sponsors invest in people’s lives (persons with disabilities) and together we strive to restore the dignity of those wheelchair-bound person’s lives”.

The  2020 Outeniqua Chair Challenged will take place on the 14th & 15th of February.