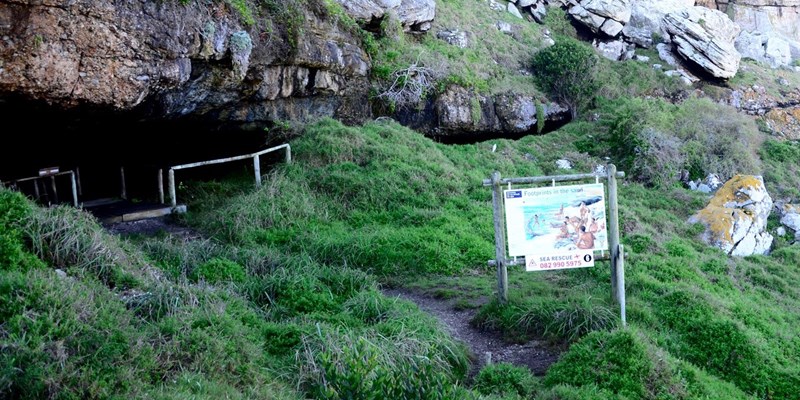 The Paleo Route, which links the Cradle of Humankind in the ancient hills and caves outside Johannesburg, with its ‘new’ paleontological sibling, the Cradle of Human culture, on the southern Cape coast was announced by then Western Cape Premier, Helen Zille, at WTM earlier this year.

Calling it the next ‘big thing’ in tourism, which would attract visitors from around South Africa and the world, she said it was one of a kind, “the birthplace of humanity”.

It includes a family of fossilised footprints in a cave near Knysna thought to be those of strandlopers – or beach-dwellers – and in caves along the coastline, evidence of significant behaviours that moved humanity up the evolutionary ladder have been found.

The evidence includes the story of what those people ate and why, of how this coastline developed, and crucially, how anatomically modern humans developed.

The evidence can be seen in the Nelson’s Bay cave on Plettenberg Bay’s Robberg peninsula, but is better explained by a knowledgeable guide who brings the story to life.

“This site contributes to our understanding of human subsistence from about 120,000 years ago,” says Dr Jan De Vynck, ecologist specialising in palaeo-ecology, at Nelson Mandela University’s African Centre for Coastal Palaeoscience.

The centre is involved in a number of digs along the southern Cape coastline, a few among Klasies river, Pinnacle Point at Mossel Bay, the Klipdrift shelter near De Hoop and the famed Blombos cave.

Nelson’s Bay cave, a Cape Nature site, is an excavated cave with a slightly dated but informative display of our human development. The site has a tiny rectangular room displaying an informative diorama, which is easy to understand.

Behind the layers of earth sectioned off behind glass, it is apparent how the stone tools became smaller and more detailed with the passing of time, the youngest being 2 000 and the oldest roughly 120 000 years old.

“Some technological artefacts enrich our understanding of our cognitive evolution,” said De Vynck, speaking of the display demonstrating how the tools, like rocks, became smaller and finer, more precise, with the passage of time.

Operators interested in this type of niche natural history offering can package the Paleo Route with other attractions, such as Plettenberg Bay, which is an established wine region, while visitors can experience watersports on the ocean and the Keurbooms River, probably the finest body-surfing beaches in South Africa and fishing, hiking, horse-riding on the coast and in the mountains behind.

Notably, there is much history waiting to be explored, from Khoi to Griqua and 1820 Settlers.