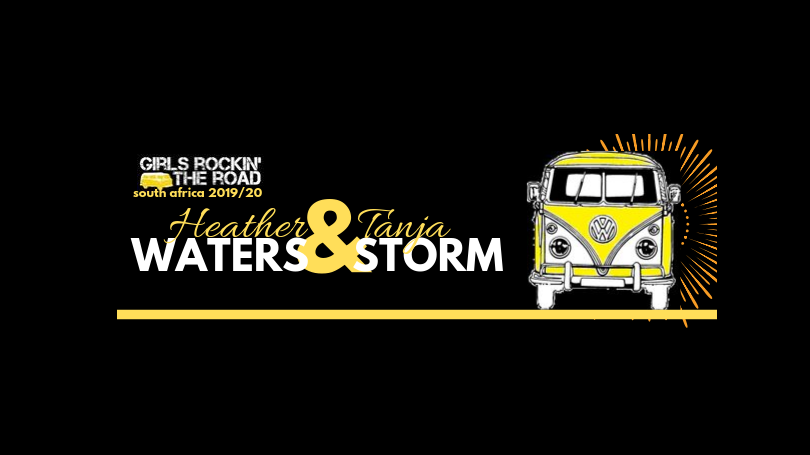 Both prolific songwriters and live performers, Tanja Storm and Heather Waters have been finely crafting their music careers over the last decade:  writing, composing, producing and touring, while their songs have been reaching TV, radio and audiences both here and abroad.

After meeting at a show in George, in which both artists were invited as guest singers, they discussed touring together and the idea for the Girls Rockin’ The Road 2019/20 tour was born.

Their individual, unique sounds and diverse repertoires, when merged, makes for a powerful, raw, emotional and vibrant show with a range of their own chart topping compositions mixed with well known classics in rock, blues, folk and ballads.

For Heather Waters it has been an exciting and transient touring career, for more than a decade, Waters has been road-tripping South Africa, Mozambique, Australia, Majorca, Ireland, UK and many parts of Europe sharing her positive message through music!

Alone or with a band, Waters draws you into her performances with her expressive guitar rhythms, honest lyrics, and passionate energy. She has released three albums, and a variety of EP’s and Singles over the years.   Waters has been featured at the FIFA World Cup Football celebrations in 2010, two of her songs were selected for TV’s Billabong Get Out There Series and many other platforms worldwide. In 2016 Waters was proudly sponsored by Volkswagen SA in her SA/Mozambique ‘Pick Daisies Tour’. and more recently, this year, Waters was one of just two hundred artists, selected from thousands, to join a music industry mentorship and touring program with a company based in the USA.  This programme closely nurtures artists at an industry level but also realize the power of positive music in Community Work, and mobilize musicians to tour across the globe – something close to Heather’s heart.   For more than a decade many of Waters’ tours have been focused on raising awareness and funds for developmental Community and Environmental projects.

In fact, Waters embarked on the first Girls Rocking The Road tour back in 2009, touring as three female-led bands from Cape Town up the East Coast with the intention of raising awareness and funds for local Community and Environmental Projects that they visited along the way.  It featured Heather Waters, Mari Bosman and Natali Shaked (UK).

Prolific, enthusiastic, creative and gifted, Tanja Storm is a multi-talented and skilled vocalist, instrumentalist and music director. She released her debut album in 2009, with her first music video broadcasted on KykNet.

Recently returning to studio after years of successful projects with cover bands and theatre work, this diverse artist released new singles that have hit number 1 on local SA music charts. She released more music videos for broadcasting on KykNet, and just recently released her much anticipated second full album ‘Ek is oppad’ in August 2019.  Because of her love of theatre, Storm has also written her own very successful tribute productions, including the renowned Rockolution: The Evolution of Rock ‘n Roll, The Eva Cassidy Story, and Women Who Rock which feature at many theatres across the Western Cape.

Heather Waters and Tanja Storm now join forces to share their music and love for South Africa.  Waters and Storm both reside on the Garden Route and share strong feelings about silencing the propaganda and negative media weighing the South African spirit down.

“We want to show the world all the good stuff about our country!  We want to spread the awareness that, here in our communities, we all actually get along very well and there are many great men and women doing amazing things to improve the lives of the people in their communities.   There is too much unseen beauty here, of both people and places, for us not to share it!”

Be on the lookout for Girls Rocking The Road, starting at Pinnacle Point, Mossel Bay on 18 December 2019 as they begin their journey towards the Eastern Cape into the new year of 2020.