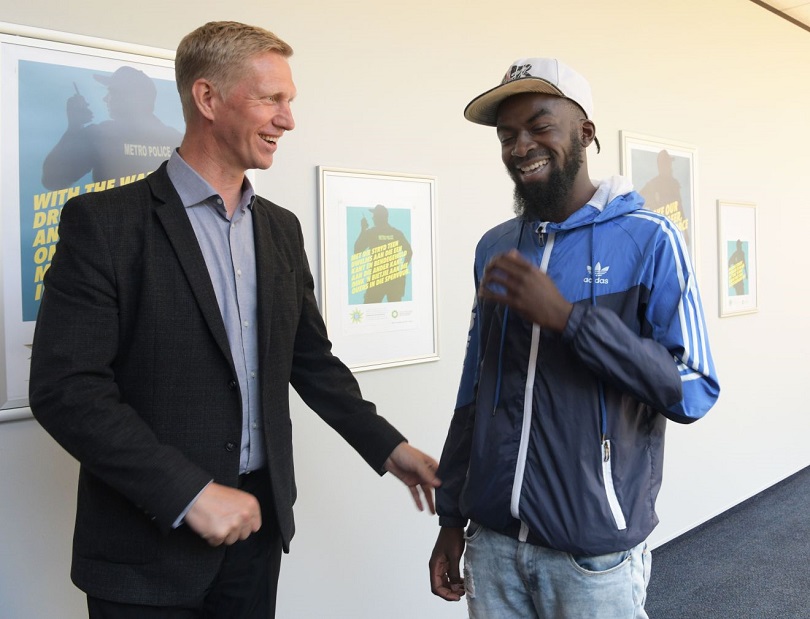 Cape Town, 25 November 2019 – The votes are in and the public has chosen Crazy-J Suave, (born Joshua Bukasa), as the winner of this year’s Festive Lights Switch-On Music Challenge.

The 24-year old local hip-hop music artist beat out 182 other competitors who entered  to claim top honours with his happy and vibey song ‘Aquafina,’ and an outstanding 5180 votes.  Crazy-J Suave will pocket R10 000 and will also perform at the Festive Lights Switch-On event happening this Sunday, 1 December 2019, from 16H00 at the Grand Parade in Cape Town.

“I’m so grateful and thankful for this opportunity to perform in front of my city and showcase why I been working so hard on my craft,” says Crazy-J-Suave.  “This means so much to me because I’m trying to inspire and show young people who are in my position that anything is possible if you work hard and stay persistent, and that you will reap the benefits of your labour, so I’m heavily grateful and blessed for this opportunity.”

While born in Madagascar, Crazy-J Suave has made his home here in South Africa.  Born on 7th April 1995, the “Trappanense” hip-hop music artist grew up in Lavender Hill, Cape Town but moved to Milnerton at the age of 18, where he currently resides.  He describes his sound as

‘new school rap’ sound that he’s created where, “I’ve used normal hip-hop elements but with my own twist, incorporating our local slang as well, and it’s also about encouraging the youth to chase their dreams and do what they are passionate about.”

Alderman J P Smith who met up with the talented young performer on Monday, noted how popular the Music Challenge has become: “There is such a diversity of musical talent in Cape Town and this is clearly reflected in the broad range of entries the Music Challenge received this year. Well done to everyone who submitted a video but there can be only one winner, so our congratulations go to Joshua Bukasa – Crazy-J-Suave.  We are all looking forward to his performance on Sunday.”

Runners up this year, who gave Crazy-J-Suave a run for this money, were Khofhi TheKing and Sindile Kamlana, whose videos also generated several thousand votes each.

Crazy-J-Suave, who is also currently working on 2 Ep’s,ablum and a bundle of Singles, will join the line-up that includes, YoungstaCPT, the Ndlovu Youth Choir, Wayne McKay, Theo Watts and the Gemini Band, DJ Portia, Chad Chitter (DJ Skouers), The Unknown Dance Crew, Zip Zap Circus as well as, Sho Madjozi.

A bit more about Crazy-J Suave

Crazy-J has always been very musical, even being part of a Church band – as a drummer – playing drums at an Arts school also known as “Batswood Arts School”.  He also showed promise on the sports field, playing soccer and for Muizenberg and Steenberg United.

At the age of 18, he relocated from Lavender Hill to Milnerton and stopped playing soccer and pursued rapping.  In March 2016 he dropped his first Album titled “Different”(Link Provided below) with collaborations with Nyota Parker, a former FLSO Music Challenge winner.

He has opened for a number of big concerts and festivals in SA since 2016,  including ” Summy in July ” and the following year(2017), “Ipotsoyi” held at the Ostrich farm with the likes of Nasty C, YoungstaCPT, and Casper Nyovest etc.  He also opened for Shekinah at the ” Relay All Denim Experience ” event at the Castle of Good hope on the 28th of October 2017 and on the 3rd of December last year, he took the stage at another major event.