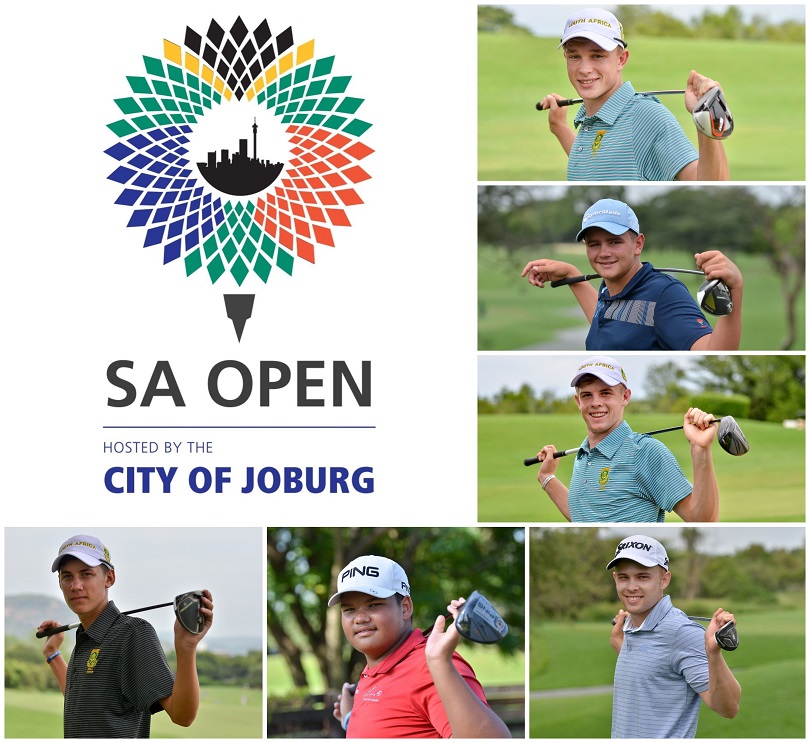 CAPE TOWN, 25 November 2018 – The South African Open Championship has always enjoyed a rich history of amateur participation and the 2020 tournament at Randpark Golf Club from 9-12 January will once again feature six of South Africa’s most promising amateur talents.

“As the custodians of the world’s second oldest Open, we are extremely pleased to offer our amateurs the opportunity to test themselves in a championship of this stature.

“We are so fortunate that we have a great depth of choice amongst our elite amateur golfers in South Africa. The fact that many of them are juniors speak volumes about the standards of coaching, golf academies, the talent management and development programs in this country.

“Although we lose players to the professional ranks at a rate that is more than desirable, we still are able to field top world-class amateur players when needed. SAGA and GolfRSA wish these six amateurs well as they vie for the Freddie Tait Cup and we implore them to grab this opportunity with both hands, as it builds their character and prepares them for their future careers.”

The Freddie Tait Cup – awarded to the leading amateur who makes the 36-hole cut – is the hottest ticket item in South African amateur golf and no fewer than 13 Freddie Tait Cup winners have gone on to win the SA Open.

In December last year, a record four amateurs made the weekend at Randpark and the 2018 Amateur champion Jovan Rebula joined the extraordinary league of gentlemen who have won the Freddie Tait Cup with his four-shot victory on six-under-par 278.

“We are very proud of the fact that all six amateurs selected by SAGA are members of the GolfRSA National Squad,” said GolfRSA CEO Grant Hepburn. “They have all worked extremely hard and achieved excellent results throughout the year, both locally and internationally.

“We have been so impressed by their work ethic, their commitment to improve and their eagerness to learn and they are all very deserving of the opportunity to tee it up in the SA Open.”

In addition to a number of victories on the local circuit, including the South African Stroke Play Championship, Schaper became the first South African winner of the prestigious Junior Players Championship at the TPC Sawgrass in the United States.

Vorster added the East of Ireland Open Amateur title to his growing international tally, while Simpson took the medallist honours in the Individual Competitions both in the All Africa Junior Golf Challenge and in Japan, where he and Vorster partnered Jarvis and Christo Lamprecht to win the Toyota Junior Golf World Cup.

Jarvis, meanwhile, rose to second in the Open Amateur rankings on the back of victories in the Silver Salver and Central Gauteng Open and runner-up finishes in the Gauteng North Open, North West Open, KwaZulu-Natal Stroke Play and the Harry Oppenheimer Trophy.

Reigning Nomads SA Boys Under-17 champion Duminy reached the final of the South African Amateur Championship, where the 16-year-old went toe-to-toe with former number one ranked Wilco Nienaber for 36 holes before losing 1-down.

De Beer’s impressive season was highlighted by his top five finish in the Brabazon Trophy and two provincial victories. The Port Elizabeth golfer and Duminy also made a fantastic debut in Mauritius alongside Schaper and Vorster to claim South Africa’s 10th consecutive All Africa Golf Team Championship victory and De Beer carried that form to Argentina, where he had top 20 finishes in two world golf ranking events, including a tie for fourth with Luca Filippi in the team competition of the Juan Carlos Tailhade Cup.

“In a couple of weeks, Jayden, Martin, Sam and Jordan will depart for Australia with Christo to compete in the Junior Presidents Cup on 8-9 December, having earned their spots on the International Team via the Amateur Golf World Rankings,” said Hepburn. “It’s absolutely incredible that five of the players in the 12-man International Team come from our small country.

“The six amateurs who have been selected to compete in the SA Open have all excelled this season and we are very excited to see how they handle themselves in a top-flight golf tournament against top talents from the European, Asian and Sunshine Tours. I have no doubt that they will represent South Africa and GolfRSA with pride.”

The 2020 SA Open will once again be played on the Firethorn and Bushwillow championship courses at Randpark Golf Club and the top three non-exempt players will qualify for the 149th Open Championship at Royal St George’s in Kent, England.

Collage – Jayden Schaper and Casey Jarvis from Ekurhuleni, Martin Vorster and Jordan Duminy from Southern Cape, Western Province’s Sam Simpson and Kyle de Beer from Eastern Province were nominated by the South African Golf Association to represent GolfRSA in the 2020 SA Open at Randpark from 9-12 January.