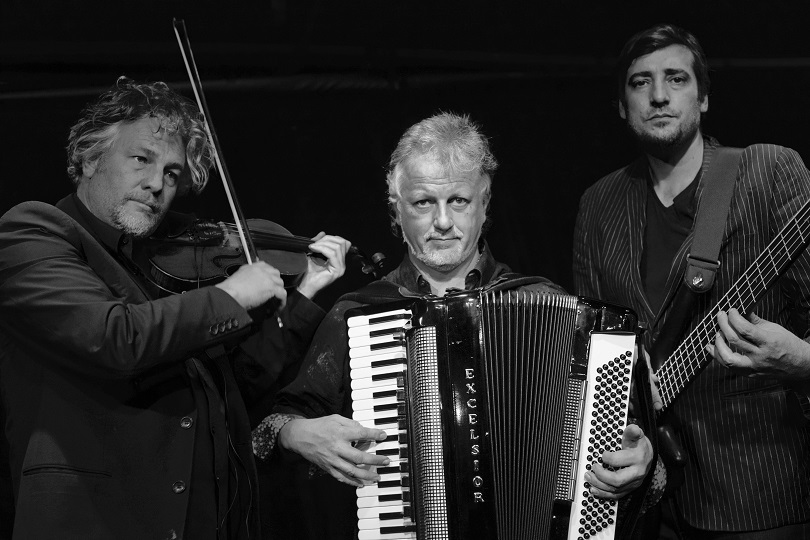 Experience Vivaldi’s Four Seasons like never before. Petrus de Beer on violin, Stanislav Angelov on accordion and Schalk Joubert on bass are three master musicians who can create an entire orchestra with their instruments. 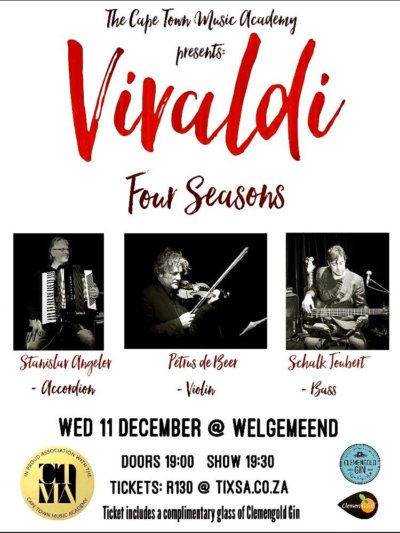 They also tell the story behind the compositions and the sonnets to make you understand and experience Vivaldi on a whole new level.

Vivaldi’s Four Seasons is probably one of the best loved Classical masterpieces of all time. Enjoyed by old and young across the whole spectrum of music lovers. The original score was written for a string orchestra, church organ and violin soloist. These days the organ is replaced mostly by a harpsichord. Because of the size of this instrumentation it is very difficult for people to hear it on their doorstep since an orchestra is costly affair. My mission was to make it accessible for everyone everywhere and staying true to the original music. For years I have been working with the Virtuoso accordionist Stanislav Angelov. His deep knowledge of music history gave me the idea for replacing the organ or harpsichord with the accordion( which was done in the previous centuries by churches that couldn’t afford an organ) The next step was to find a bassist that could play the original score and would be willing to fill in the missing parts for us to be faithful to the Italian Maestro.  Schalk Joubert was the obvious choice and his creative input is abundantly clear in every live performance. He is also our Narrator. Stanislav covers the rest and I play the original 4 Concertos as written over 300 years ago. Since it’s the first programmatic music of its kind and was published originally with 4 sonnets depicting and telling a story of each season, I thought it essential to include them in our performance.  We aim to translate them in many more languages, but for now, Afrikaans and English must do.

The Afrikaans translation from the Italian was done by my dear friend Dr. Dawid de Villiers.

More about each musician:

Petrus is a classically trained violinist (Mmus RSAMD) who resides in Paarl. He performs regularly with various artists in various genres. He is a member of the acclaimed Cape Town Tango Ensemble and works frequently with his colleague Stanislav Angelov in a variety of styles. Recently he launched a collaboration with guitarist Albert Frost, exploring the world of Blues. De Beer has made recordings with David Kramer, Zanne Stapelberg and many more.

Schalk is a truly seasoned musician who has been working a a solo artist, freelance bass player, composer, arranger, producer and musical director with some of the most popular and revered artists in the South African Music Industry. He works from a place of a mixed cultural heritage and his biggest influences are the traditional music of South Africa, rhythms of West Africa, the harmony of Europe and the great variety of pop, rock and jazz music he grew up listening to. Over the last ten years he has performed extensively in USA, Europe, Australia, Malaysia, the UK and New Zealand.

Classical Accordionist Angelov was born and educated in Bulgaria with Conservatory degree in Accordion, before he came and settled in Cape Town in 1992. Since then he has appeared on albums of many SA artists like Valiant Swary, Koos Kombuis and Daniele Pascal. He has released three albums with his Cape Town Tango Ensemble with one SAMA nomination, as well as another 2 CD`s, with other projects. In 2003 he appeared at the first 46664 Nelson Mandela Concert at the Green Point Stadium and performed a song together with Brian May, Rodger Taylor (Queen) and Dave Stewart (Eurythmics) and in another song accompanied Bob Geldof. His repertoire is as versatile as his instrument, ranging from Classical to Jazz, Tango, French Café, Balkan etc.

This group of violin concerti was composed in 1723 and published in 1725 in Amsterdam. It is to this day one of Antonio Vivaldi’s most famous works. Allegedly, he later wrote poems to express the meaning of the music in which he tries to portray his experiences of each of the 4 seasons of the year. This is one of the earliest examples of program music – which in essence, is music with a narrative element. With this rendition of Four Seasons, listeners hear the familiar piece of music in a format not heard before in South Africa. Picture these various violin parts performed with 3 instruments only – a violin, a bass and an accordion.

Tickets: R130 at TIXSA.co.za
Complimentary Clemengold Gin will be served before the show.