The Ctrack Transport and Freight Index continues to reflect the slowing nature of the South African economy.

According to the Index, all logistics sub-sectors measured in South Africa, except road freight, recorded declines between August and October 2019 compared to the same three months in 2018.

Concerns must be mounting in boardrooms across the country as the economy struggles with slowdowns in manufacturing, mining, and retail. 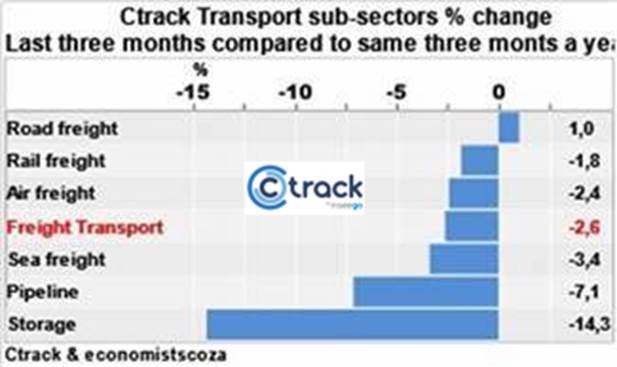 Road freight, the largest sector in South Africa by volume and value, increased 1% during the period from August to October 2019 versus the same time in 2018.

Short distance transport volumes of retail goods and FMCG are still expanding, while the continuous shift to online shopping is helping parcel delivery volumes. Black Friday and Cyber Monday will also prop up this category.

However, the strongest road freight income growth has come from the small furniture transport sector, which may have to do with emigration and families moving to more secure locations – even while home sales remain subdued.

Rail freight volumes declined -1,8% between August and October 2019 compared to the same period in 2018, which indicates that primary mining products are not being exported or used as much.

Furthermore, metal products have seen the largest decrease as a few medium-sized firms have closed in the last 12 months. The decline in metal products income in nominal terms was -6% and, although not all of this was in the rail sector, the knock-on effect to mining would have hurt the rail freight industry.

Air and sea freight volumes declined by -2,4% and -3,4% respectively between August and October 2019 compared to the same period in 2018. This reiterates the impact of a weak global economy and the trade war between China, the world’s largest manufacturer and the USA, the world’s largest consumer. Bulk commodity and container shipping are also in decline.

But, by far the worst performing sub sector has been storage. Manufacturers and internal traders are keeping stocks low as they expect trading conditions to worsen. Both the ABSA PMI and the Trade Activity Index from SACCI, show that role-players are concerned about the strength of the economy. 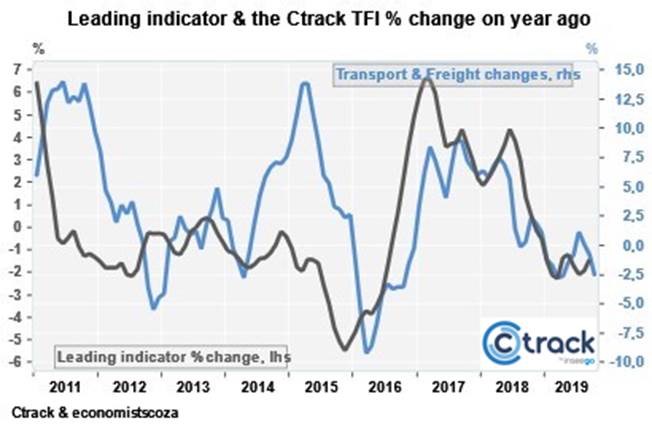 Added to this is the decline in the international storage of containers transhipped in South African ports. Transhipments declined a massive -19,3% between August and October 2019 versus the same period a year ago. While big shifts are not uncommon in the storage sector, it is concerning when all categories in this subsector are so negative.

The total decline of -14,3% in the amount of goods warehoused between August and October 2019 compared to the same period last year, is a relative indicator of the poor confidence that firms have of short-term economic performance.

Thankfully, interest rates are lower than before and are likely to drop further, reducing the cost of storage. Moreover, the shift to online shopping means that at least from that perspective (albeit small) the warehousing sector has a few positives to draw from.

However, the biggest factor in the broader logistics sector is the lack of confidence that goods will be sold relatively quickly, and that quick refilling of shelves will have to take place.

Retail price increases have remained below overall consumer price adjustments for about four years. In fact, retail prices have not increased over 3% for more than three years consecutively. This best reflects the fight that exists for the consumer’s pocket.

Pipeline volumes declined -7% between August and October 2019 compared to the same period in 2018, mainly due to the decline in fuel sales volumes.

Overall, there seems to be no respite for the logistics industry, apart from the short boost to retail volumes thanks to Black Friday and Cyber Monday.

These two selling days may be strong enough to at least see a small improvement, but otherwise, the logistics sector will have to wait until next year. Ultimately though, throughout the supply-chain there are genuine concerns about low economic growth and price pressures.

“In tough economic times, the cost of operating fleets can become a very difficult task,” says Hein Jordt, MD of Ctrack SA. “The need to provide competitive rates, while part of a fleet is not moving, presents transport and freight companies with additional challenges.

“Optimising fleet usage and keeping costs low cannot be done without the support of the type of systems and solutions that Ctrack provides. Ctrack believes that certain elements – risk, driving behaviour, productivity, optimisation and asset management – should be prioritised and given the most focus, which cannot be achieved without intelligent fleet management solutions.

“The trends presented in this month’s Freight and Transport Index show that government must look even closer at the supply chain industry, and support transport and freight companies with cost-effective road regulation policies.

“Improved safety measures and economic policy that supports efficiency improvements, in conjunction with well-planned integration with our country’s transport and economic infrastructure, will allow us to be competitive in the global logistics market,” Jordt concludes.