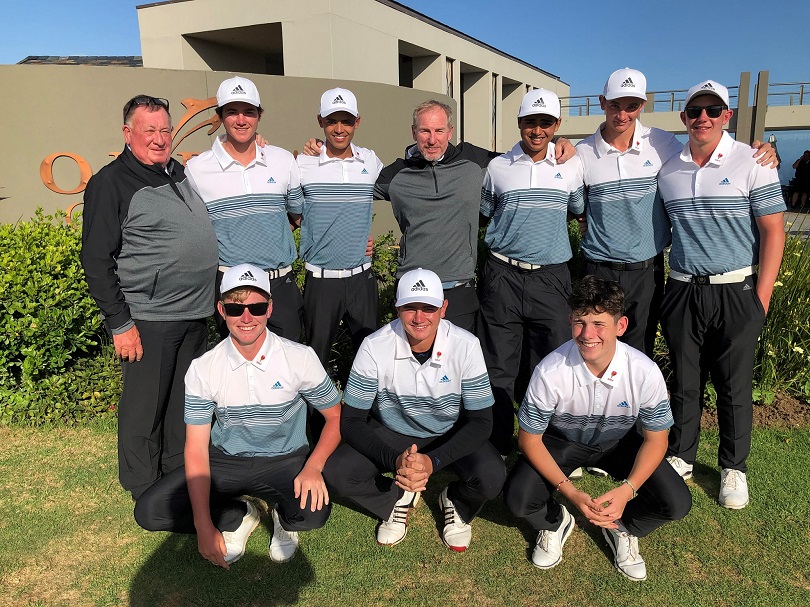 GEORGE, 10 December 2019 – Ekurhuleni picked up where they left off last year and threw down the gauntlet with two convincing victories in the opening round of the South African Under-19 Inter-Provincial on Monday.

Two years ago, the Ekurhuleni juniors won the premier junior golf team championship title for the first time in nearly 30 years at East London Golf Club and last year the side powered their way to a successful title defence at Benoni Country Club.

Showing great touch in the 30km plus wind that raged around the Ernie Els Signature Course at Oubaai Golf, Hotel and Spa, the two-time champions routed North West 9.5 – 2.5 and defeated Central Gauteng 8 – 4 to launch their bid for a hat-trick of titles.

Boland, who had a first-round bye, joins the action on day two in a three-way match against Ekurhuleni and Western Province. North West faces the host union, while Central Gauteng and Gauteng North have a second round bye.

In the battle for promotion, KwaZulu-Natal and Border flexed their muscles on the opening day.

KwaZulu-Natal surrendered only 1.5 points as Joseph Kunene’s young charges motored to an 11.5 – 0.5 victory against Limpopo and an 11 – 1 triumph over Mpumalanga.

Mpumalanga managed to defeat Limpopo 8 – 4 to bank their first points.

Border came up trumps in a closely contested tussle with Eastern Province and edged out their neighbours 6.5 – 5.5 and doubled up on points with a 7.5 – 4.5 result against Free State.

The Lions routed Gauteng North 10 – 2 to bank 1 point on the opening day.

All was not lost for Eastern Province, who routed Free State 7.5 – 4.5 to bank their first points in this year’s tournament.

Limpopo and Border will enjoy a rest day on Tuesday, while Northern Cape will wet their feet for the first time when they tackle KwaZulu-Natal and Free State and Mpumalanga faces off against Eastern Province.

PHOTO – Ekurhuleni began their bid for a hat-trick of South African Under-19 Inter-Provincial titles on a high note with two convincing victories at Oubaai Golf Club; credit GolfRSA.