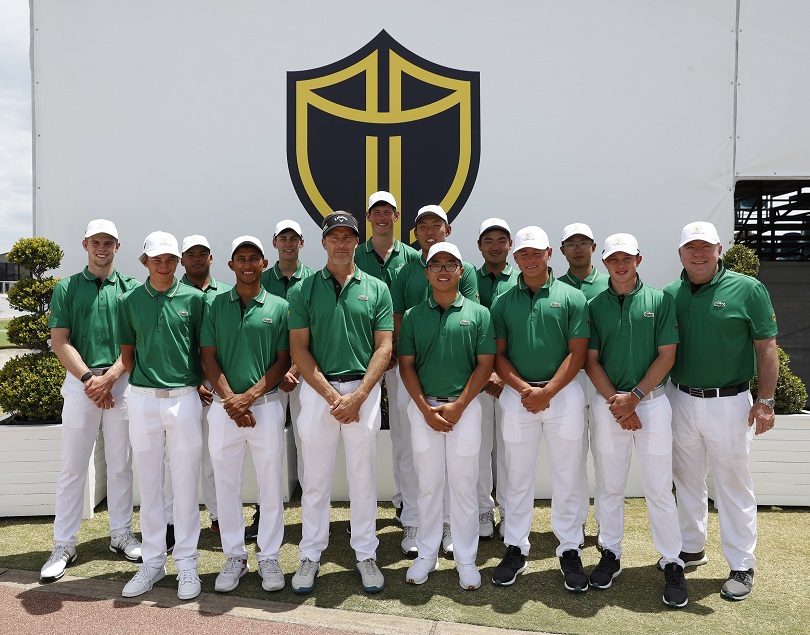 VICTORIA, Melbourne, Australia (9 December 2019) – The United States Team fended off a feisty challenge from the International Team on Monday to win the Junior Presidents Cup for a second consecutive time.

The American juniors carried a comfortable 9 – 3 lead from the opening day’s Four-Ball and Foursomes sessions into the final round at a sun-baked Royal Melbourne Golf Club.

Then, just as they did two years ago in the first edition, the International mounted a huge comeback, rattling off five consecutive victories in the top six matches to mount a comeback.

After Chuan-Tai Lin from Chinese Taipei fell in the opening game, wins from reigning Junior Players champion and South African number one Jayden Schaper (2-up), Kartik Sharma from India (3 & 1), Jang Hyun Lee from South Korea (5 & 4) and Chinese pair Bo Jin (3 & 2) and Andi Xu (1-up) moved the Internationals within two points.

South Africa’s Christo Lamprecht beat US number one Brett Roberts 4 & 3 to take the side to 9 points and further victories from fellow GolfRSA National Squad members Sam Simpson and Martin Vorster boosted their tally to 11 points.

Simpson, playing at number 3, eliminated Preston Summerhays 1-up and Vorster at number 2 knocked out Canon Claycomb 2 & 1.

It was too little, too late, though.

It was the second consecutive time where the Internationals dominated the Singles session. No less than five matches went the distance, with the International Team winning three on the 18th hole.

International Team Captain Stuart Appleby was proud with how his charges made the Americans fight for their victory.

“We had a chat and a chuckle after the first round about what the Singles will be like….the Melbourne Massacre, the Sanbelt-ing. I was so impressed. The odds weren’t good and I told the guys to take it six holes at a time and try to get to a good start and move on,” Appleby said.

“It wasn’t always pretty as the course was the biggest opponent today with the weather, but they focused. I’m super proud how they turned around some matches.”

U.S. Team captain Justin Leonard said he knew they were in four a tough day.

“I tried to convey that to the team and it was. I was glad to see the International Team come out like that. I knew they were capable of it and its hard playing against a player or team that is kind of mad and has nothing to lose. That’s a pretty dangerous combination,” Leonard said.

“They started great and we were down on every match except the top match for a while. We got a couple of close ones go our way in the end, just like the morning and afternoon sessions on day one. Those really made the difference for our team.”

Leonard, who featured in five Presidents Cups, believes his 12 junior golfers have every potential to become stars on the PGA Tour in the near future.

“For the guys, I think this is a peek into what the PGA Tour looks like, at least in a team aspect. This event mirrors the Presidents Cup in almost every way imaginable, maybe outside a few more thousand people and TV cameras. It was fantastic. Going forward, this should prepare them to want to achieve these kinds of things in the game of golf.

“When you get into a room and you are with the best 11 players in the field and where you are at the point, it makes you a better player. You look around and realize you’re one of the special groups, but it takes a lot of work to stay in that special group. A week like this can propel them to bigger and better things.”

Appleby also believes many of his 12 players can become leading golfers on the world stage.

“I’ve tried to give them an idea of what golf is really about and how you try to break it down and how you should look at your progress and problems,” said the Australian, who has played in five Presidents Cups.

“Very rarely you hold that trophy and you’ll hold that trophy for five minutes, but it has taken hundreds, if not thousands of hours, just getting up to that point. Then you put it down and you move on again. And that’s what Tiger (Woods) has done his whole career. There’s a lot of talent. They’re good enough here, they’re much better when I was their age.”

This included a Four-ball victory from Sam Simpson and Christo Lamprecht and two ties from Martin Vorster and Jayden Schaper and the Jordan Duminy partnership with Jang Hung Lee.

Chuan-Tai Lin from Chinese Taipei and China’s Bo Jin scored the team’s only point in the Foursomes, while Jin reeled in Single victories alongside compatriot Andi Xu, India’s Kartik Sharma and Lee.

On the Team USA side, Vishnu Sadagopan was the only player to win all three of his matches, while Ian Siebers had the tournament’s shortest match with his 7 & 6 win over Lin.

PHOTO – Despite dominating the Singles on the final day at Royal Melbourne Golf Club, the International Team come up 2 points short and lost 11 – 13 to the United States Team in the 2019 Junior Presidents Cup; credit Baliker/PGA TOUR.