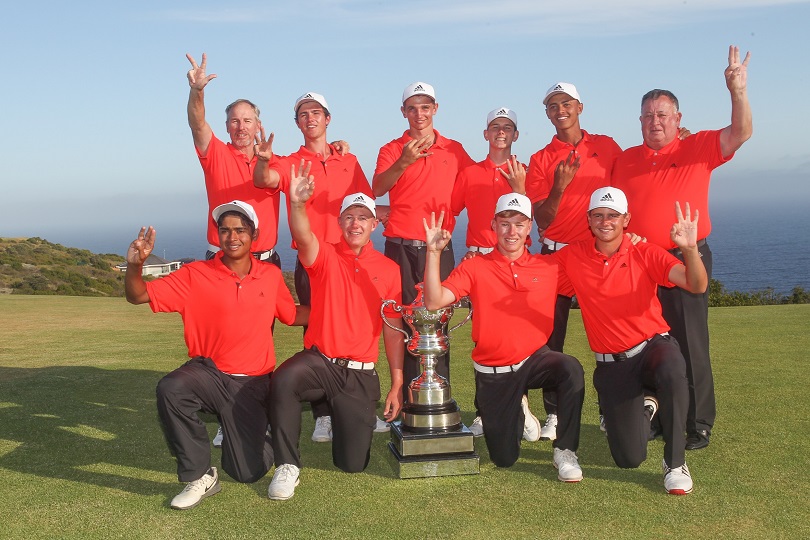 GEORGE, 14 December 2019 – Ekurhuleni rose to the occasion on the final day to close out a hat-trick of titles at Oubaai Golf, Hotel and Spa, while KwaZulu-Natal could finally celebrate winning the promotion battle in the South African Under-19 Inter-Provincial at close of business on Friday.

Two-time defending champions Ekurhuleni laid down a marker and surged to the top of the log with a strong start against North West (9.5 – 2.5) and Central Gauteng (8 – 4) on day one.

After a closely-fought battle with Western Province ended in a draw on day two, the Roses rallied on keep their title defence on track with a decisive win against Gauteng North (8 – 4).

The fight was far from over, though.

Jack Turton guided Ekurhuleni to the winner’s circle in East London in 2017 and again at Benoni Country Club last year. With Southern Cape, Central Gauteng and Western Province just 2 points back and still in with a shout, he had one message for his charges.

“Uncle Jack told us we had to beat Southern Cape and it would be tough because the guys would have the local support. We knew Central Gauteng and Western Province would come out guns blazing, so we had to keep fighting for that win,” said young skipper Warwick Purchase.

Central Gauteng had a clean sweep in their Foursomes against Gauteng North and Western Province led North West 2.5 – 1.5, but Ekurhuleni had the edge on Southern Cape, too.

“We led them 2.5 – 1.5 and I told them to fight for every point in the Singles and to keep on fighting until our last putt dropped,” Turton said. “I am incredibly proud of this team. Their determination and their will to succeed was amazing and I especially loved their team spirit and the way they supported each other, right up to the very end.”

The four rookies led the challenge in the Singles. Christopher Bagnall at number 8 defeated Jay Nathwani 3 & 2 and Carel Tromp at number 6 ousted Ivan Verster 4 & 2 to take the team to 4.5 points.

“Giaconi Middel (1 & 3) and Grant Ferreira (1 & 2) had narrow losses, and it was down to our veterans to get the job done. And they really dig their heels in to get us the win,” said Turton.

“Yurav (Premlall) at number 2 was always up in his game, but the others were all down. Mujahid Jacobs put up a massive fight, but Yurav closed out a 2-up win to take us to 5.5 points. Then Warwick won the 15th hole and won it for us with a 2 & 1 result against Barend Botha.”

The rest of team cheered on Ryan van Velzen, who downed James Murray 2 & 1, and number 1 Casey Jarvis, who defeated Southern Cape number 1 Damian Osner 1-up to seal an 8.5 – 3.5 victory for Ekurhuleni.

Technical adviser and assistant manager Rob van Velzen said the team’s preparation for the premier junior team event was key to their success.

“We had some Foursomes practise sessions before we came down to Oubaai and we also worked on ball striking with our rookies,” he said. “Coming from the highveld, the boys are used to hitting the ball very high, and since we knew we would be facing the wind at the coast, we taught the boys some finesse in keeping the ball lower and controlling the spin of the ball.

“As expected, the veterans on the team were brilliant, but hats off to the rookies, who did a fantastic job for us in the windy conditions, especially over the first three days.”

Purchase believes the practice sessions helped, but it was Turton’s touch that helped the team come up trumps for a third successive year.

“Uncle Jack put the belief in us that we could win it,” he said. “Just like he did when we were rookies in East London and last year. And he created a great team environment. We fought hard, but we had a lot of fun. IPT are about winning matches, but it’s also about having fun, meeting new people and making friends.

“Uncle Jack and Uncle Rob give us that space. We made lifelong friendships in our Junior IPTs over the years that we will carry through our lives. I’m super, super proud of the team, especially in the way that we hung tough in the final round to finish the week unbeaten. Winning IPTs is a team effort, and every guy on our team put his hand up this week.”

Van Velzen also secured the top spot in the Most Valuable Player standings for the week, banking the full 12 points on offer.

Central Gauteng’s Nikhil Rama was second on 11 points, and Ekurhuleni captain Purchase took third on 10.5 points. Jarvis was fourth on 10 points, while Kian Rose, Sam Mackenzie and Amilkar Bhana from the Lions shared fifth on 9.5 points with Jordan Wessels from North West.

North West rallied to beat Western Province 7 – 5, but Province held on to third place. Southern Cape finished fourth, North West fifth, Gauteng North sixth and last year’s B-Section winners Boland will have it all to do over again after finishing at the bottom of the log.

Twelve months after their surprise relegation at Benoni Country Club, former hat-trick winners KwaZulu-Natal reclaimed their place in the A-Section with a dominant performance in the Southern Cape.

“We came into the final round after a fourth round bye and knowing we already won the B-Section and it a little tough to motivate the guys, but they went out there determined to try their best,” said delighted manager Joseph Kunene.

“Eastern Province proved too strong in the singles and we lost 4.5 – 7.5. It wasn’t the unbeaten week we were hoping for, but the boys had done the hard graft at the start of the week when it mattered the most. We surrendered just 7 points in our first five matches and that’s what counts.

“It was a delight to watch the way this team gelled and fought for each other. They are a great bunch of guys who never took their eye off the prize and I am really proud of their achievement. We are back in the A-Section where we belong and that’s all that matters.”

The Most Valuable Player’s list spoke volumes of KwaZulu-Natal’s fantastic effort at Oubaai.

Jack Cubitt topped the standings with a clean sweep of 12 points. Mitchel Hampson was second, having surrendered just half a point.

The team’s captain Kyle Kistensamy and Sean Paxton tied for third on 10 points with Qhamani Tande from Border and Eastern Province’s Malan Potgieter. Luke Cubitt finish on his own in seventh on 9.5, Nathan Trodd shared eighth on 9 points and Cade Cryer tied for 12th on 8.5 points. Astin Arthur also finished in the top 20, sharing 17th spot on 7.5 points.

“Having learned our golf at the coast, we could really use our skills and shape our shots into the wind, especially over the first three days and that was a huge advantage over the rest of the players,” said Kistensamy, the reigning Friends of Engelberg champion. “But we also prepared really well because losing out on the promotion was not an option.

“We got our Foursomes pairings spot on and won almost every game, which also gave us a huge advantage heading into the Singles. I’m so proud of the team and it’s great that we can all share in this victory. We prepared really hard for this and it’s an awesome feeling to pull it off.”

Border also reeled in five wins against a single loss, but the coastal side came up short in game points and had to be satisfied with a runner-up finish.

PHOTO – Hat-trick heroes Ekurhuleni closed out their third successive victory in the South African Under-19 Inter-Provincial with an unbeaten week at Oubaai Hotel, Golf and Spa; credit Pieter Els.