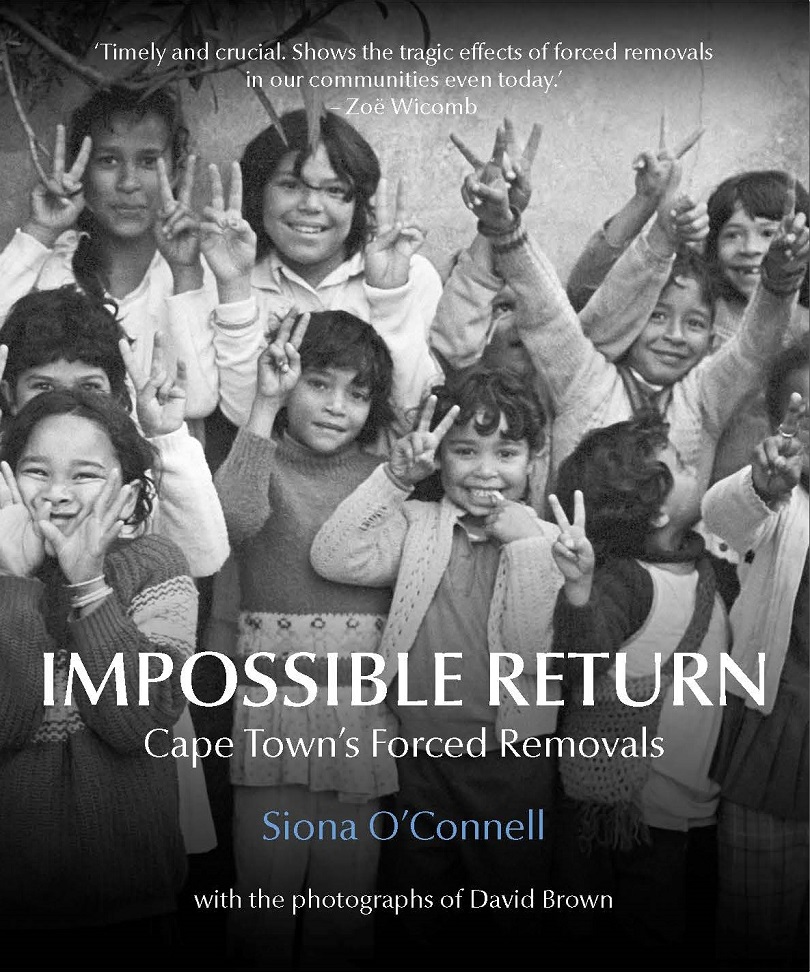 With the photographs of David Brown

One of the most insidious pieces of legislation the apartheid government enacted was the Group Areas Act and its ripples will still be felt long after everyone touched directly by it and who instigated it have gone.

Harfield Village near Lower Claremont is an excellent example of a city divided. It was one of the first areas in Cape Town to be decimated at a stroke of the apartheid government’s lethal pen. Families were separated from families and sent to the furthest corners of the Mother City to places like Athlone, Mitchell’s Plain and other areas of die Vlakte as the Cape Flats was known to the people who were forcibly removed there.

Now Siona O’ Connell has, with the help of the late David Brown’s iconic images, chronicled one of the darkest chapters of South African history.  Harfield Village was a culturally mixed area and though the Coloureds dominated the area,  whites, Indians and blacks happily lived side-by-side until the government split them asunder.

O’Connell interviewed several families among them Shannon Edwards, who now lives in Claremont, a stone’s throw away from her childhood home in 1st Avenue, Harfield Village.

There is an image by Brown of her as a toddler with her mother which was published in a newspaper. And it is through this photograph that O’Connell comes to know her, and though she was little more than a baby at the time the picture was taken, as she talks the expressions on her face and gestures speak of a sadder time. Shani says she loved living here (Harfield Village) as a child. But she knew she didn’t want to live in Mitchell’s Plain. Eventually she moved back to the area and every so often she passes her childhood home but has never gone inside. “It looks too barred up and they would probably think I was coming to take their house.”

O’ Connell writes that in telling her story Shannon is beginning to find some closure.

Sharifa Booley (10 Bedford Street), now living in Sybrand Park, experienced forced removals long before they were evicted from Harfield Village. Her grandfather was the last man standing in McGregor Street, District Six. As a homeowner he refused to leave as he “had a business here”. Eventually he was offered a property on Main Road, Athlone, and was given special permission to operate a shop. Reportedly he made the first kerem board for sports shop owner, Jack Lemkus, a well-known name in Cape Town. Not long afterwards Sharifa was also forced out and went to Athlone.

In the house where Sharifa and her husband Sulaiman live, there are remnants of their previous lives: the Bedford Street fridge is still running in the kitchen, and the family continue to use the same dining room chairs that they have used for the last 40 years. On the cabinet in the dining room is David Brown’s picture of Sharifa and her mother, Miriam.

“You just accepted things at the time. It bothers me now that we simply accepted being told to move,”Sharifa says.

Alton Curtis tells the story of Harfield Village and his own life in his own words.

“ I was born down the road in Princes Road,  opposite us was Princes Square. Africans and Coloureds stayed here together. People were very, very happy. It was a very close-knit community, everyone knew everybody. His description of events and of the people living there dance across the pages. There is an underlying bitterness, though. But who can blame him? “There’s always going to be racial conflict in this country. Don’t dream …young people shouldn’t dream for a minute that it will be all right. What you have done will come back to you. The wheel turns. It may turn slowly but it turns,” Curtis says.

The hurt will never go.  Gaven Daries , 12 St John’s Terrace, Gloucester Street, was reluctant to share his memories. Although he later recalled anecdotes about his schooldays. Gaven has strong views on how land claims should work, not that he would submit a land claim because it was his parents who were thrown out, not him. “The Harfield houses have been ‘stolen’ from  tenants and owners. “It’s stolen goods. It’s one of the things that were stolen from us as kids. The house was stolen. It was taken from somebody and sold to someone else. That’s stolen.”

David Brown who died in 2016 always wanted to mark Harfield Village in some way, O’Connell notes,  and his startling and iconic images are a tribute to his genius and to the people who so warmly welcomed him in to their homes.

As O’ Connell writes in her conclusion. “An accumulation of destruction, loss and grief of South Africa’s past is summed up in this white-washed village of Cape Town. It speaks of an insurmountable loss that is mirrored across millions of homes in South Africa. Remembering on its own cannot offer redemption or freedom … This is unfinished business and there is more work that has to be done.”

Impossible Return shines a light on one of the darkest corners of South Africa’s history and through the telling of their stories Harfield Villagers recall the angst, the hurt and the rejection. But they still remember some of the good times.