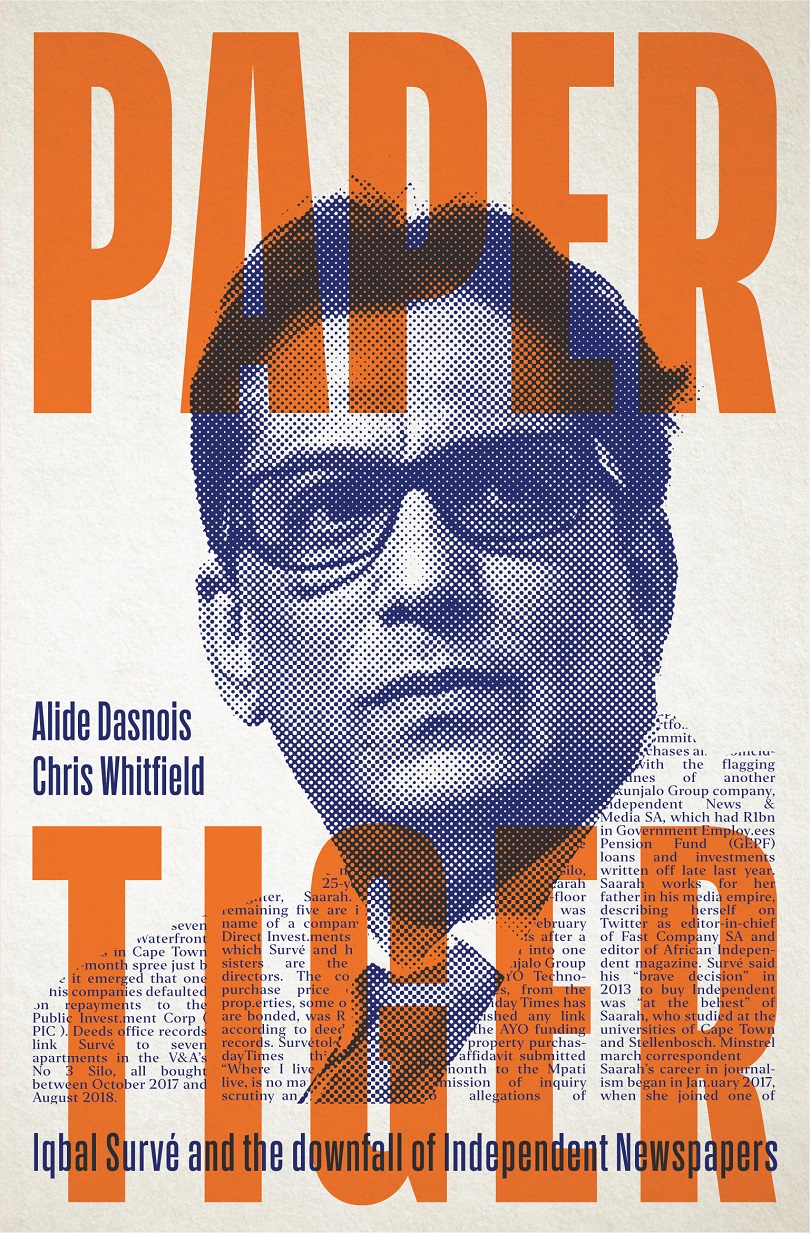 Iqbal Surve and the downfall of Independent Newspapers

The Sunday Times printed an extract of Paper Tiger and gave it the headline, “The ego has landed”, which was apt.

Not so long ago the Argus, one of the titles in the Independent stable, published in the promo box, the space next to the masthead which tempts readers to the stories of the day, a grovelling apology complete with Iqbal Surve’s picture for spelling his name incorrectly. Mere mortals get a two-liner hidden somewhere on page 2. The ego has landed, indeed. Since Surve bought Independent,  pictures of his  family and himself hobnobbing with the great and the good appeared often in the supplements that are published as standalones in the different titles. His daughter, Sara, worked as a reporter on the Argus, and was even given a by-line. Surve too, wasn’t shy to make his views known on everything from the annual World Economic Forum talkfest in Davos to transformation in the media, always accompanied by an image. Surve was also quick to accuse other media owners of trying to undermine him because he was black. In fact if you didn’t work in the media or for Independent then I doubt that the stories were of much interest to the average newspaper reader.

When Surve bought the Independent Group through his company, Sekunjalo, with a lot of help from the Chinese, some trade unions and the Public Investment Company (PIC) which controls billions of rand in government employees’ pensions, he promised the staff he would not interfere in editorial matters.

But the evidence shows otherwise. The Cape Times, a once proud title (the first edition appeared in 1876), has under the editorship of Aneez Salie, a Struggle activist, been reduced to a travesty of a newspaper, publishing fake news and deliberately distorting stories.

The UCT #Feesmustfall debacle is a good example when they portrayed Chumani Maxwele as a hero. Maxwele ignited the countrywide #Feesmustfall movement when he threw excrement at the Cecil John Rhodes statue at UCT. Salie often used to boast how the front pages of the Cape Times won awards from the Newseum based in Washington DC. That was also fake news, and if you didn’t already know, a quick question to Dr Google, would explain that the centre showed how various newspapers across the world handled the story of the day. There are no prizes for anything.  According to the website the mission of the Newseum is to “increase public understanding of the importance of a free press”. The newspapers themselves send their front pages to the Newseum which is considered one of the most interactive in the world.

The deterioration of the Argus Group, though, started long before the arrival of Surve. It began when Tony O’ Reilly bought the stable of newspapers. To his credit, he largely kept his nose out of editorial matters. However, he cut staff and stripped assets of the company with all profit going to Ireland.

Surve just exacerbated the problem. And the purge of white staff began when he fired Alide Dasnois, the editor of the Cape Times, for not putting the death of Nelson Mandela on the front page of her paper. Instead she produced a four-page wraparound, which was named by Time Magazine as one of the 15 best newspaper tributes to Mandela in the world.

The lead story on the front page of the Cape Times that fateful day was a story about Sekunjalo Marine Services Consortium and the Public Protector’s Report on a “fishy” tender. Surve owns Sekunjalo.

Many other top-rated journalists, white, were fired on the flimsiest of pretexts. Among them Melanie Gosling, an award-winning environmental journalist, because she covered the Sekunjalo debacle;  assistant editor, Tony Weaver, who stood up to Aneez Salie, then deputy editor, over a security guard who was shot dead inside the Pick n Pay branch at Waterstone Mall in Somerset West. At the daily news conference Salie instructed Weaver not to use the picture with the PnP sign which was central to the story, as it would not be fair to PnP, who incidentally is one of Independent’s biggest advertisers. Weaver vehemently disagreed but the next day the image appeared without the sign, although Die Burger and the Times did use it. Weaver’s weekly Man Friday column in the Cape Times was essential reading as was former editor John Scott’s incisive Notes from the House. Scott was summarily dismissed and Die Burger snapped up both columns. Tony Grogan’s Crack of Dawn, a staple in the Cape Times for many years, sank without trace or any notification whatsoever. Salie accused me of being racist when I asked why the “white” cartoonist’s sketch had been spiked without reason. Although he did say Grogan had told him he was tired.

The names of editorial staff who have left since Surve took over reads like a roll of honour and they include some of the country’s most respected names in the industry including extremely talented sub-editors and business writers: Ann Crotty; sub-editor Glen Bownes; top environmental writer, John Yeld; his wife Martine Barker, managing editor of the Cape Town operation; ace crime reporter Caryn Dolley; group training editor, Jonathan Ancer who left when Surve slashed the budget for the cadet school; John Scott, was given his marching orders in a terse email from short-lived Cape Times editor , Gasant Abarder, without a plausible explanation; respected labour writer Terry Bell who wrote that he could find no evidence that Surve was Mandela’s “Struggle Doctor” as he so often proclaimed, and of course Weaver, whose Man Friday column was a must.

Paper Tiger has not been reviewed in any of the Independent titles but its detractors (read Surve’s sycophants) have lambasted Whitfield and Dasnois for their temerity in speaking out, and indeed, anyone else. Notably Ferial Haffajee, former City Press editor and now associate editor of the Daily Maverick, was taken to task by Richard Mdluli, a “senior Independent journalist” in a four-part series of opinion pieces, unfortunately it is full of half-truths and innuendo.

The authors point out that some voices are missing from the narrative because they didn’t respond to requests for interviews. Which is a pity. I would have liked to read what the toadies among them, Abarder, who is working for UWC; Salie; Karima Brown, now a talking head on ENCA, had to say about obeying their master’s voice and how they helped to erode editorial honesty. The truth is for all to see.

In the latest twist to the saga, Surve has appointed Salie as Editor-in-Chief of the group. Perhaps it’s his way of giving everyone the finger. Interestingly, Salie, one of Dasnois’s biggest detractors, used a wraparound (December 6 2018) to mark the fifth anniversary of Mandela’s death, without any discernible consequences.

Dasnois and Whitfield, then editor-in-chief of Independent Newspapers Cape, have written a riveting account about the dramatic days and events leading to the decimation of a once-proud newspaper group.