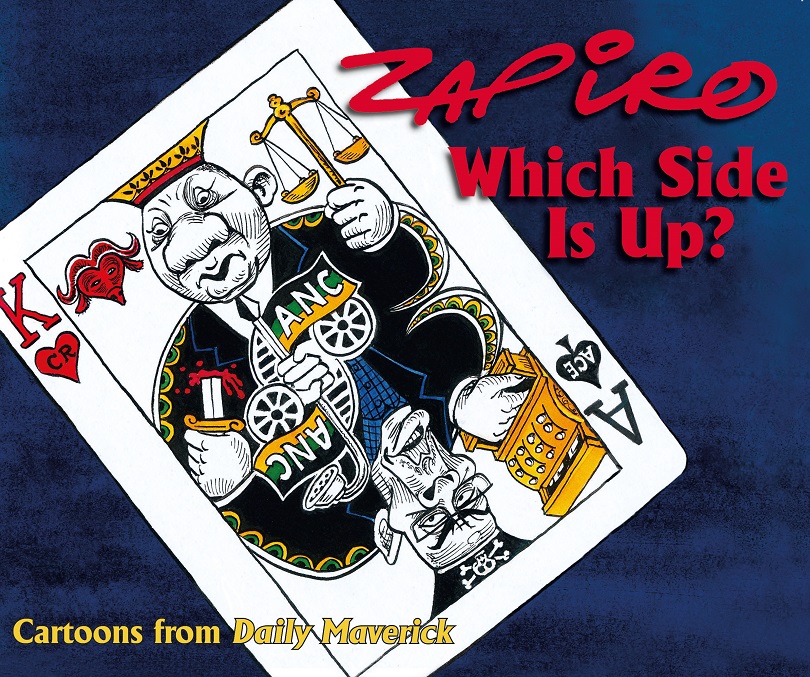 Lucky for Zapiro that the politicians the world over stuff things up for the rest of us, otherwise he wouldn’t have a job. These cartoons in the annual collection were published in the Daily Maverick during 2019.  The first cartoon is of the ANC’s secretary general, Ace Magashule, who had been meeting secretly with former president, Jacob Zuma, to unseat president Cyril Ramaphosa, pictured with knives, axes, pickaxes, in his back, and Zuma’s showerhead firmly lodged in his skull.

Other cartoons that focus on the South African condition look at former finance minister Nhanlha Nene who misled the Zondo Commission tasked with investigating State Capture; public enterprises minister Pravin Gordhan also looms large as does former Cape Town mayor, Patricia de Lille, who is now minister of public works in Ramaphosa’s cabinet; the usual suspects who also made headlines over the past year include former SARS commissioner, Tom Moyane and the disgraced former minister of home affairs, Malusi GIgaba, falling on his “sword”. Zapiro’s showerhead features more than once above Ramaphosa while Jesse Duarte, deputy secretary general and former speaker Baleka Mbete also get one each for their role in “standing up” for women’s rights.

US president Donald Trump; Public Protector Busisiwe Mkhwebane; Zuma and his “non” testimony at the Zondo Commission; Julius Malema and the EFF; Eskom; Boris Johnson and many others feel the sting of Zapiro’s pen.

There are moving tributes to musician Johnny “Great Heart” Clegg and Raymond Louw, former editor of the Rand Daily Mail and champion of Press Freedom.

Mike Wills provided the pithy captions.  Which Side Is Up? would make an excellent Christmas gift.

Zapiro was recently appointed Chevalier de L’Ordre des Arts et des Lettres (Knight of the Order of Arts and Letter)s by the President of the French Republic.