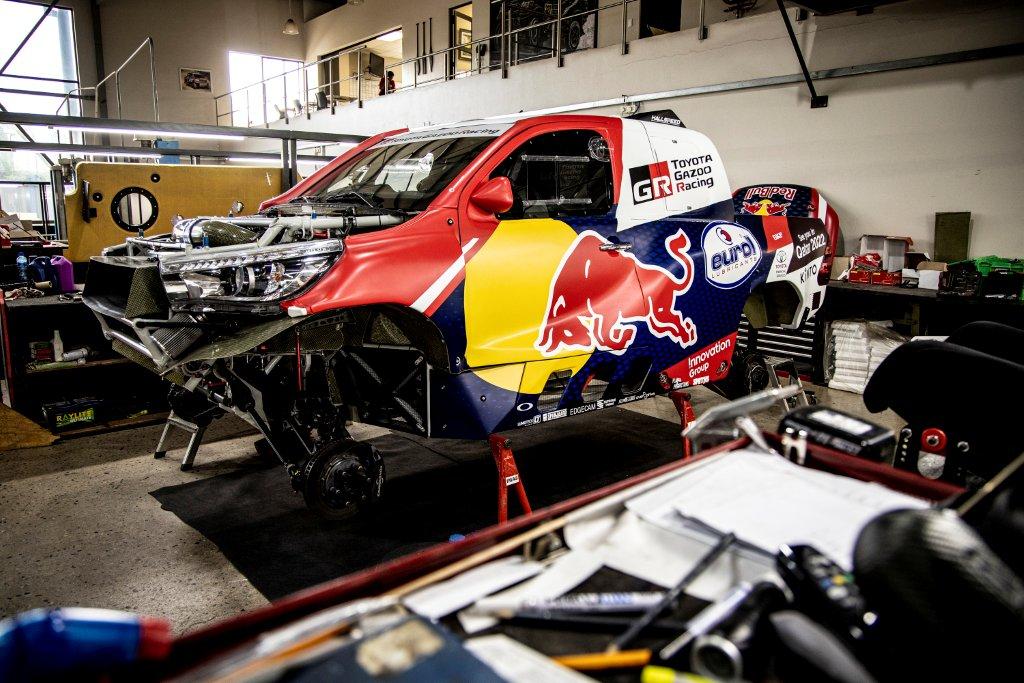 Brian Joss – Toyota Gazoo Racing will be fielding a four-car team in the upcoming Dakar Rally, which sees the race relocate from South America to Saudi Arabia. The team will be utilizing the latest version of the race-winning Toyota Hilux, when the race gets under way in the Saudi city of Jeddah, on January 5.

Having won the 2019 edition of the iconic race, the team will be under pressure to perform right from the start, once the flag drops for Stage 1.

Spearheading the attack will be defending champions Nasser Al Attiyah (Qatar) and co-driver Mathieu Baumel (France). The pair not only achieved victory during Dakar 2019, but also won each race they entered, with the exception of the Rally of Morocco. This makes them the odds-on favourites to take victory in Saudi Arabia, though they’re sure to be pushed hard by teammates Giniel de Villiers and co-driver Alex Haro.

The South African, now partnered with Spaniard Haro, claimed victory during the 2019 Rally of Morocco, and have the advantage of regularly testing the South African-built Toyota Hilux throughout the local cross-country championship (SACCS). The man from Stellenbosch is hungry for more silverware, thanks to his victory in Morocco.

The third Toyota Hilux will be driven by Bernhard ten Brinke (Netherlands), who has signed up the services of his former co-driver, Belgium’s Tom Colsoul. The pair have proven very quick in the past, and Ten Brinke found himself at the sharp end of the Dakar Rally two years running, before cruelly bowing out due to technical issues with the finish almost in sight.

Fernando Alonso and Marc Coma, both from Spain, will be taking charge of the final South African-built and developed Toyota Hilux. The pair have spent months preparing for the race, and while Alonso has made it clear that he still has a lot to learn, he has shown exceptional pace in the car, and will be aiming for a steady run, rather than all-out victory.

The 2020 version of the Dakar-winning Toyota Hilux features numerous small tweaks over the 2019 version, but it retains the same suspension geometry and engine layout as the previous car. Testing in South Africa has allowed the team to work on refinements and reliability of key components, and TOYOTA GAZOO Racing Team Principal, Glyn Hall, is quietly confident of the latest version of the Toyota Hilux.

“We’ve made significant gains while racing in the South African Cross-Country Series, which serves as our main test bed during the year,”

explains Hall. “As one would expect, the gains have been incremental rather than the evolutionary leap we saw when we introduced the all-new car two years ago; but when you add up all the improvements we’ve made, I’m confident that we’re fielding the best Toyota Hilux we’ve ever seen.”

In addition to local testing, the Toyota Hilux has also taken part in a variety of tough International cross-country races, including the Silk Way Rally, Qatar Cross-Country Rally and the Rally of Morocco – and it came away victorious in each of those outings.

In recent years, altitude has played a key role in the Dakar Rally, thanks to the Andes mountain range which feature along most of the length of the South American continent, where the race has taken place since 2009.

However, the shift to Saudi Arabia will see the race run at lower altitudes, where the naturally aspirated V8 engine of the Toyota Hilux will be right at home.

“With that said, the engine’s abilities will still largely be determined by the size of the intake air restrictor, which has been limited to 37mm for the 2020 Dakar Rally,” says Hall. “The purpose of the restrictor is to help the organisers balance the power output of the various engines in the race, and while we’d always prefer a larger restrictor, at least we won’t have to deal with the complexities of extreme altitudes this year.”

The race will start in the Saudi’s second city, Jeddah, which is located on the Red Sea, in the western part of the country. Stage 1 is scheduled to start on January 5th, after which the race winds its way northwards to the city of Neom, before heading inland along a southerly course that takes the Dakar to Saudi’s Empty Quarter for the second week of the race.

Dakar 2020 will draw to a close in Saudi Arabia’s capital city of Riyadh, on January 17th, 2020. The race will consist of 12 stages plus one rest day, and it will cover a variety of terrain types, including mountains, riverbeds and many dunes.

The 2020 race will be the 42nd edition of the Dakar Rally, and over the years the race has visited 30 countries – three in Europe, five in South America and 21 in Africa, with Saudi Arabia now added to the list. It is the second-largest motorsport event in the world, eclipsed only by F1.

“There can be no doubt that the Toyota Hilux is one of the toughest bakkies ever made. Taking on the extreme challenges offered by the Dakar Rally serves as the perfect platform for us to demonstrate the unparalleled toughness and reliability that has always set the Toyota Hilux apart from its competitors,” says Leon Theron, Senior Vice-President of Sales and Marketing at Toyota SA Motors. “To us, coming together is a beginning.

Staying together equals progress, and working together leads to success. We remain humble, yet undeniably hungry for victory.”

CAPTION: In tune: Toyota will have four Hilux race cars in the field.  Picture; Motorpress