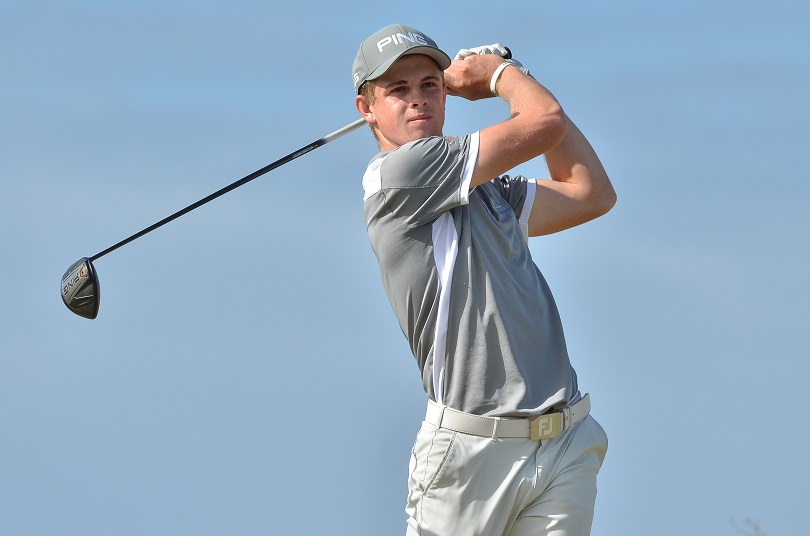 RANDPARK, 7 December 2020 – Dreams do come true….just ask Gauteng pair Kieron van Wyk and Merrick van As, who pushed the amateur tally in the 2020 South African Open Championship to a record 10 when they booked their berths in Monday’s qualifiers.

The 17-year-old Ruimsig golfer secured his start in the world’s second-oldest national championship with a flawless six-under-par 66 that featured a pair of birdies on the third and fourth holes and a run of three from the 14th.

“The best score in was five-under and I knew I was in a strong position after 16, but I missed out in 2018, so I wanted a birdie finish to make double sure,” said the 17-year-old South African Golf Development Board member.

“I hit a good drive down the right on 18, but unfortunately the ball rolled off the fairway and nestled in the rough. All I could do was try to advance it. I got it on the front edge, chipped it 10 feet past but holed a quick downhill putt to get that birdie. This is without a doubt the best moment of my career. “Every guy I know dreams of playing in the SA Open. It was the first goal I set myself 2020 and it’s the greatest feeling in the world to know I’ve done it. I can’t wait to get going.”

Meanwhile, Van As upstaged seasoned professionals to clinch the third spot on offer with a two-under-par 70 in the qualifier at Parkview Golf Club.

“I am over the moon,” said the 27-year-old. “Golf had to take a back seat after I joined our family business, Great Beds, six years ago and these days I play scratch league for CMR two to three times a month. That’s about all the time I spend on the golf course.

“My brother Mark is the head pro at CMR and he called to tell me they would be hosting one of the three qualifiers. I reckoned I might have a shot with my local course knowledge, but Murphy’s Law, I got drawn at Parkview.

“The guys I played with said you needed five-or six-under to qualify, so I didn’t think it was going well, but then the nice lady doing scoring told me there was only one score better than mine. I quietly started to hope. Mark was waiting in the parking lot with a bottle of champagne, following the scoring on his phone and we nearly took the roof off Parkview when we realised I made it.

“You dream about this moment when you’re young, but at some point for most of us, life takes over and you think it’s never going to happen. Then it does…I’m still taking it in.”

The South African Open Championship, co-sanctioned by the Sunshine Tour and European Tour and hosted by the City of Johannesburg, tees off at Randpark Golf Club from 9-12 January with defending champion and the new tournament host Louis Oosthuizen leading the chase for the lion’s share of the R17 500 000 purse.

Auburn University senior Rebula lifted the Freddie Tait Cup in the 2019 edition as the leading amateur, while Premlall became the youngest amateur at 15 years and five months to qualify for, and make the cut in the national Open in December 2018.

“Competing in the South African Open Championship is a dream come true for all amateurs, who will not only be fighting for the Freddie Tait Cup honour, but also the chance to emulate the legendary Denis Hutchinson, who was the last amateur champion in 1959,” said South African Golf Association President Naadir Agherdien.

“In addition to the six amateurs, the South African Golf Association nominated, the Sunshine Tour invited Jovan as the amateur defending champion and extended another invitation to SAGA and GolfRSA, which we allocated to Yurav, currently seventh on the Open Amateur rankings.

“To have two more amateurs – Kieron and Merrick – come through the qualifiers is indicative of the depth of talent we currently have in South African amateur golf.

“The challenging Firethorn and Bushwillow courses will be a stern examination for our members, but GolfRSA has prepared them well for the task ahead through exposure to premier events with strong fields here and abroad. I am certain they will all have butterflies at the start of the first round one, but I believe they have the tools and the games to cope with the pressure and the stature of this event.”

“Our GolfRSA National Squad members all have wonderful physical ability and talent. The opportunity to learn from the best and the experience of competing at the highest level will serve them well in the future, both as amateurs or if they choose to carve out a future as professionals. Irrespective of how they perform, they will represent South Africa and GolfRSA with pride and we wish them well for the campaign ahead.”