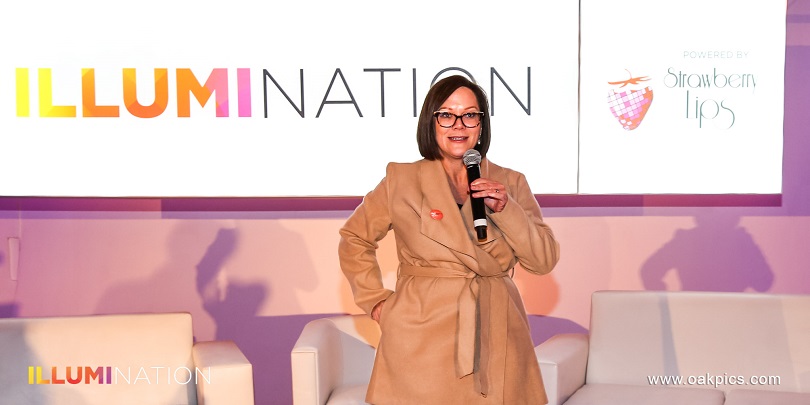 For the past year, South Africa’s leading strawberry cream liqueur, Strawberry Lips, has been at the forefront of rallying South African’s to embrace authenticity and prosper in a meaningful way – a year when South African’s conquered locally and globally. In August 2019, and in celebration of Women’s Month, Strawberry Lips powered Illumi.Nation. A stunning evening of debate, reflection and encouragement.  Moderated by Sibongile Mafu, the panel discussed the philosophy of being true, living authentically and empowering women (and men) to break down the barriers of gender conditioning. The event included a two-hour open dialogue between a panel of select speakers and the diverse group of event guests.

Then in September, Strawberry Lips joined forces with Cosmopolitan magazine to bring a first-of-its-kind campaign to the nation. As an educational drive on self-love and breast cancer, the campaign reached eight million young South African’s and generated a flurry of positive feedback. Over-and-above the reach, the collaborating brands, lead by Strawberry Lips,  raised over R9 million in value for Breast Cancer Awareness Month and contributed towards 5,000 PinkDrive breast examinations and educational interventions.

Vanessa Nel, Strawberry Lips Marketing Manager says, “What inspires us as a South African brand is how authentic we are as a nation. As a brand, we don’t sponsor, but rather acknowledge. Through our support of various initiatives, we are able to participate in the conversation, shine a light and giveback in some way or another. It’s this authentic approach that will shape and inspire the next generation.” Over the past few years, South Africans who have been true to themselves have made waves on the world stage in several different industries. They have become tangible role models that inspire through their authenticity:

During his 27-year stint in prison, his time in office from 1994 – 1999 and beyond, Nelson Rolihlahla Mandela was known as an anti-apartheid revolutionary, political leader and philanthropist. He was the country’s first black head of state and is remembered across the globe as one of the greatest leaders the world has ever seen.

In business, Mamphele Ramphele represented South Africa abroad when she became one of four Managing Directors of the World Bank in 2000. Ramphele was the first South African to hold this position. This was the world’s introduction to what South Africans are capable of in the business and finance sector.

Since 2008 Caster Semenya has been at the forefront of women’s athletics, taking more than a few gold medals in her eleven-year international career. Semenya is one of many South African athletes building the reputation of SA sport.

In 2019, Ayakha Melithafa, a seventeen-year-old environmental activist from the Western Cape was one of sixteen children, including Greta Thunberg, to file a complaint to the United Nations Committee on the Rights of the Child for failing to adequately address the climate crisis. Beyond this, Melithafa contributes to further South African and African organisations committed climate change.

On the music scene, Sho Madjozi went viral in 2019 for her track ‘John Cena’. The track was so popular that it was picked up by John Cena himself and praised by many notable musicians. Madjozi proudly showcases her Tsonga heritage to the world in her appearance, dance and music.

Bonang Mathebe is a local South African celebrity whose list of international achievements include being the first international ambassador for Revlon outside the United States of America and hosting the 2014 MTV Europe Music Awards pre-show, making her the first South African to host the ceremony. Mathebe is believed to be taking her personal brand to Hollywood in 2020.

2019’s Miss South Africa, Zozibini Tunzi, was crowned Miss Universe in December 2019 after competing against 90 hopefuls from across the world. Tunzi was the third woman from South Africa to win the title. Her mission over the following year is to change the status quo on what is ‘beautiful’ and what leadership should look like in the future.

Nel concludes, “There are so many more South Africans making it at home and abroad by being sincere and genuine. May they be examples to all of us in 2020, the year for South Africans to shine!”