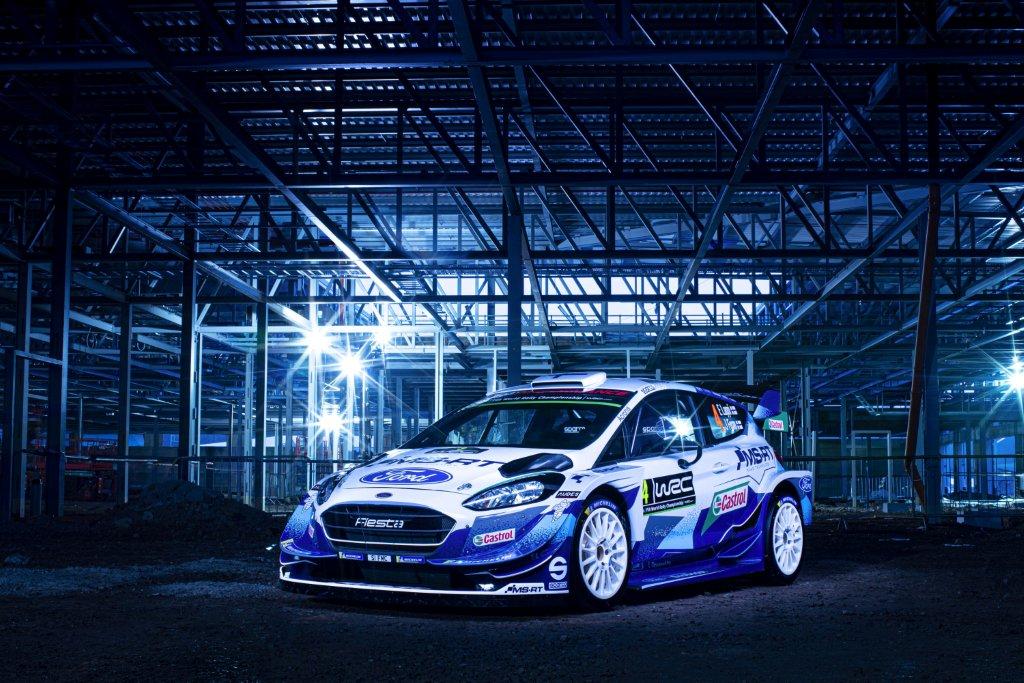 Brian Joss – M-Sport Ford World Rally Team’s EcoBoost-powered Ford Fiesta WRCs will be adorned with a striking new livery this year thanks to graphic designer Phil Dixon who has delivered another eye-catching creation for the 2020 FIA World Rally Championship.

The Cumbrian’s work attains fan-favourite status year after year. This season his vision drew inspiration from print designs of the early-to-mid 90s, and the Fiestas will carry a modern-retro theme as the team look to the future with a young and ambitious new line-up.

The 2020 colour scheme offers a largely white design with highlights of blue and green to represent the close partnership with Ford as well as increased support from Castrol – as facilitated through the Blue Oval’s global alliance. Existing partners MS-RT, Michelin, Sparco, OZ Racing, NGK, Lazer, Stilo, Acronis, Endless, Audes, Eibach and SWP are also proudly displayed within the design.

The Cumbrians are also looking to the future closer to home, and the official photos were taken in the M-Sport Evaluation Centre which is fast taking shape and due for completion this autumn. Having constructed a 2.5-kilometre test track last year, the experts at Northern Developments are now focused on the adjoining 10,723 m2 workshop.

Progressing at pace, 550 tonnes of structural steelwork is already in place and all of the external precast concrete walls have been fully installed.

Once complete, this extensive multimillion-pound development will mark a new era for M-Sport – with a truly unique centre of engineering excellence on the edge of the Lake District National Park.

The project was made possible with investment from the UK Government’s Regional Growth Fund (RGF) as well as Growth Fund investment provided by Cumbria Local Enterprise Partnership (CLEP) – and will ensure Cumbria plays its part to boost local economy, skills and innovation within the Northern Powerhouse.

Graphic Designer, Phil Dixon, said: “My initial inspiration came from François Delecour’s 1995 Ford Escort RS Cosworth. White cars have always been popular, and with the increased support from Castrol that colour scheme was spot on. In general, the whole design has a nod to the early-to-mid 90s.

The patterns and fashions of the era are really prevalent at the moment, so I was interested to create something in that style whilst still being on-trend and relevant today.”

Team Principal, Richard Millener, said: “Phil is a real talent so it’s not surprising to see his designs become fan favourites year after year. This year he’s captured a sense of nostalgia in something totally modern and inventive, and I have to say that it’s one of my favourites!

“It’s great to see our close relationship with Ford well represented, as well as the increased support from Castrol. Many of our existing partners are also proudly displayed, and the livery looks even better close up. I hope many of you will be able to get out into the forests and service parks to see it for yourselves!”

Managing Director, Malcolm Wilson OBE, said: “Like every rally fan, I look forward to seeing our new livery and I have to say that the team have done a fantastic job this year. Rallying is at the heart of our business, and we have built a team that I am immensely proud of. But if we want to continue it’s important to diversify, and the M-Sport Evaluation Centre offers exactly that.

“Northern Developments are making great progress, and we are creating a fantastic facility where industry leaders from the motorsport and automotive sectors will have everything, they need to follow a concept from design to production. I truly believe that we have something special at M-Sport, and this new development is only going to build on that – promoting Dovenby Hall as a unique centre of engineering excellence.”