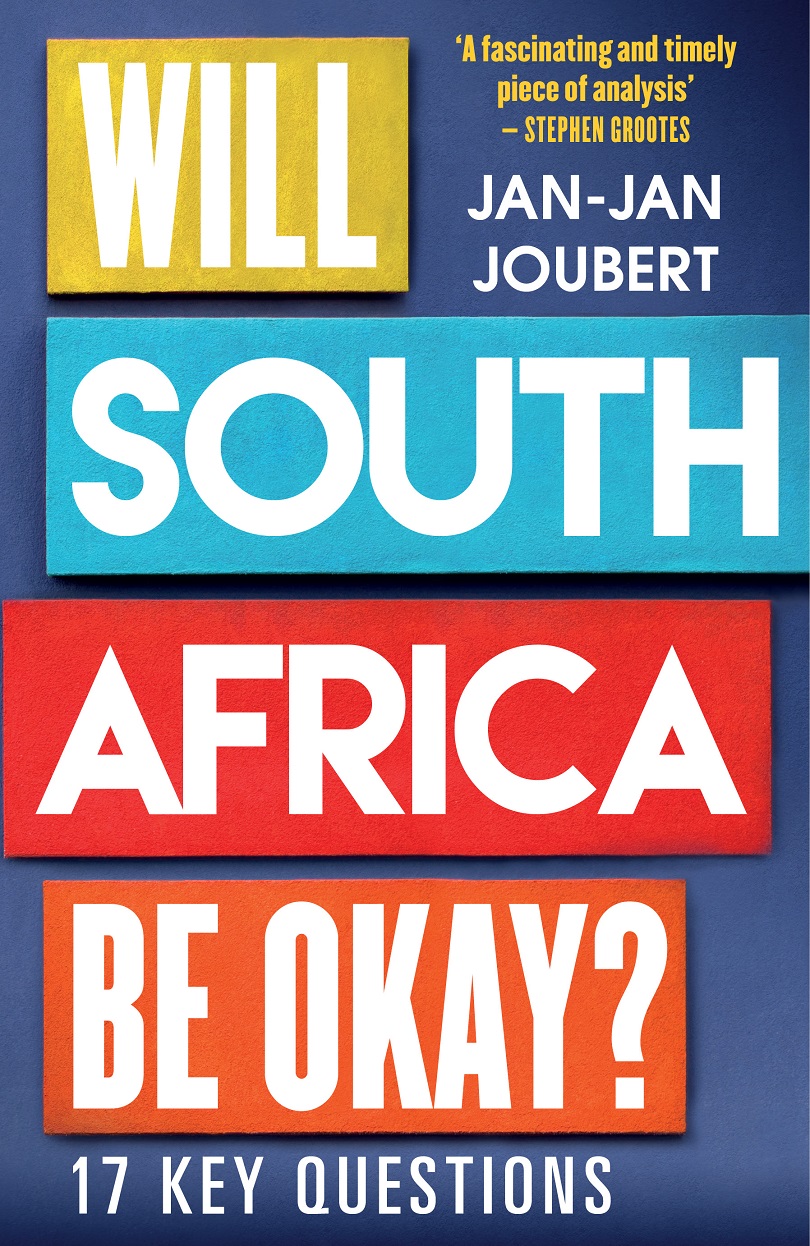 Seasoned political reporter turned author answers his own question, number 17, Will South Africa Be Okay?  Joubert’s conclusion is yes, but only if everyone does their duty; everyone must do their work; everyone must do their bit. Then South Africa will be Okay. ”To ensure that South Africa will indeed be Okay, we must each start with ourselves. The government has its role and its duty, but we must beware not to shift all responsibility on to the state,” Joubert writes.

One of the questions that everyone is asking is Can Eskom Be Fixed?  According to energy expert James-Brent Styan who contributed this chapter, the answer basically is no. Styan suggests that the government doesn’t have the political will to make the necessary hard decisions to get the entity back on track. These decisions include tackling a bloated workforce and ensuring that debtors are brought to book. For instance, writes Styan, there is no way that the government will cut off electricity to Soweto, even though it owes Eskom R18 billion almost as much as the rest of the country combined. Cyril Ramaphosa’s plan to break up Eskom in to three units is a non-starter, according to Styan, who says the debt and money problems won’t go away even if Eskom is broken in to 100 pieces. “The bottom line is that if Eskom fails, the country falls. At the moment Eskom is falling . Fast.”

Joubert also names his dozen best parliamentarians. This chapter is dedicated to pioneering female journalist, Jane Raphaely, who asked him if there were at least five good MPs in Parliament. Of course, it is all subjective and Joubert named 12. One of them is the EFF’s Mbuyiseni Ndlozi, who has a doctorate in political philosophy, and whom Joubert counts as a good friend. But this was written before he made those racist remarks after the Springboks won the Rugby World Cup. Others are the ANC’s Naledi Pandor; another EFF MP Floyd Shivambu, gets the stamp of approval, despite him being linked along with his boss, Julius Malema, to the looting of VBS Bank; the DA’s John Steenhuisen; and another surprise nominee, Pieter Groenewald. FF Plus, whom Joubert credits with bringing his party out of the wilderness after the recent general election.

Other questions that Joubert asks are: What is wrong with DA? Ramaphosa: Saviour or Faustian weakling?; Was Helen Zille in the Wrong?, among others. The latter is a debate about Zille’s now infamous tweet on colonialism which, Joubert believes contributed to the party’s decline.

In Ramaphosa: Saviour or Faustian weakling?; Joubert lists 10 commandments that he suggests  the president follow. Here are four of them summarised: growth must take priority; stop the brain drain by shifting the focus off affirmative action: education should be declared an essential service; and; expropriation of land without compensation must be stopped. It has failed wherever it has been attempted.

In trying to analyse the Ramaphosa factor (How big is the Ramaphosa factor really?), Joubert uses numbers to conclude that many South Africans who only voted nationally voted for Ramaphosa. But as always there are statistics and there are statistics. For example, Joubert claims that the Purple Cow – the South African Capitalist Party – did well in the Western Cape, the heartland of the DA but it failed to get a single seat.  Joubert says that it is not possible to calculate the Ramaphoria factor or what value it had for the ANC, scientifically or empirically.

Will South Africa Be Okay is a credible analysis of the country’s future,  Joubert’s opinions are not unbiased, especially his views on the top 12 MPs where the EFF figures prominently. And his piece about Helen Zille is also not , in my view, objective.

Lawyers have a saying, “Don’t ask questions if you don’t know the answers” and Joubert demonstrates this point in the chapter, “What is wrong with the DA?”, knowing full well what the answer was going to be.

Nevertheless Will South Africa Be Okay? deserves to be read if only to see whether Joubert’s analysis is correct. You can decide for yourself if South Africa Will Be Okay?