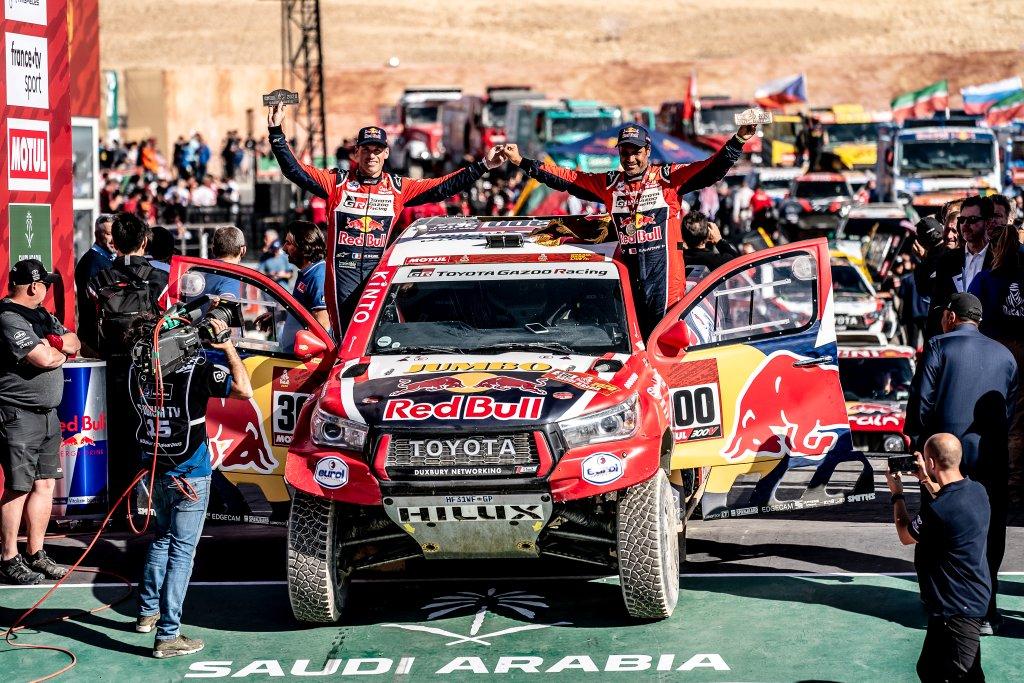 Brian Joss – “We came here to win, so we can’t help but be disappointed with the final result. Then again, we have three cars in the Top 10, and finished second after a tough battle, so there’s plenty to be proud of.”

The pair pushed hard over the closing stage, which was shortened to just 167km, in a supreme effort to close on Sainz, who started the stage with a lead of 10min 17sec. In the end the Qatari recorded the fastest time of the day, notching up the team’s second stage victory of the race and closing the gap by more than 3min. This was good enough to fend off MINI’s Stephane Peterhansel, who had his eyes on the second place; but it wasn’t good enough to attain the top step of the podium.

“It was a tough fight,” said Al-Attiyah after the race finished in the entertainment complex of Qiddiyah, 40km from the city centre of Riyadh.

“Unfortunately, we just lost too much time to punctures, a penalty and one navigational mistake. It cost us the victory, but we’ll be back to fight again next year.”

Dakar 2020 also saw South Africa’s Giniel de Villiers and Spanish co-driver Alex Haro record a stage victory. In their case, this came early in the race, when they powered their Toyota Hilux to victory on Stage 2 of the 12-stage race.

Their progress was also hampered by multiple punctures, especially in the first week of the rally. They did, however, maintain a Top 10 position throughout the event, and finished in 5th place in the overall standings, 1hr 7min 9sec behind the winners.

Bernhard ten Brinke, who had two consecutive retirements from the Dakar Rally in recent events, partnered with Tom Colsoul for 2020, and completed the event in 7th place. The Flying Dutchman and his Belgian co-driver were 1hr 18min 34sec behind in the final standings.

Dakar 2020 was a spectacular effort by Fernando Alonso and Marc Coma, as the Spanish duo not only finished the rally, but Alonso also attained the highest finish position for a rookie. The pair suffered a setback on Stage 2 of the rally, losing more than two hours after hitting an unmarked ditch, but fought back to a Top 10 position mid-rally.

They again lost time when they rolled their Toyota Hilux on Stage 10, but showed tenacity and determination to not only complete the race, but to finish in the 13th place overall.

“In the end, we brought all four of our cars to the finish without any technical issues,” concluded Hall from the final bivouac at Qiddiyah. “That in itself is a great achievement, especially considering the terrain we had to traverse.”

Saudi Arabia offered a spectacular backdrop for the 42nd edition of the Dakar Rally, and included dunes, fast sandy tracks and rocky crossings. The race consisted of 12 stages, starting in the Red Sea city of Jeddah, and concluding on the outskirts of the Saudi capital, Riyadh, on Friday, January 17th.