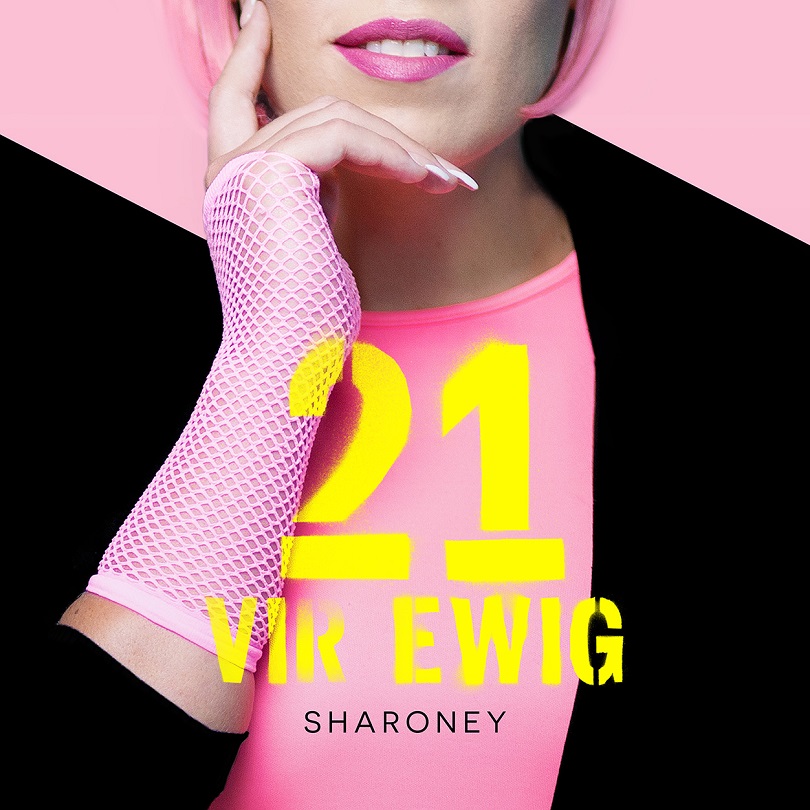 The versatile artist, with her bubbly stage personality and zest for life, SHARONEY, is back with the first single release and music video from her upcoming album, which is set to take the industry by storm.

21 VIR EWIG (21 FOREVER) boasts a brand new mature Pop sound and is something different to what fans are used to. “This single has a catchy tune that invites you to sing and dance along. It is the type of song that is going to be popular at parties, the gym and on any road trip,” she shares about this long-awaited release.

The track, written by Douvoordag’s Jattie de Beer, conveys the positive message that the soul never truly ages. It encourages listeners to make the best of each and every moment, because at the end at the day you are only as old as you feel.

“I remember my twenty-first like it was yesterday, because to me that is the age where you finally reach maturity. You are young enough to enjoy life, but old enough to cherish the memories you make. Sometimes, I wish that I was able to turn back the clock – if only for a day – and experience that age again. When I heard 21 VIR EWIG (21 FOREVER) for the first time, I had no doubt in my mind that it should be included on my new album, because I feel that audiences of all ages would be able to relate to it,” says SHARONEY, who is extremely excited about sharing her new music with the world.

Fathom Media, with whom she has collaborated with in the past, was the creative brain behind the new music video which was released exclusively via Jacaranda FM social media platforms at 10h00 this morning.  The video will also debut exclusively on television tonight on VIA’s Klink Soos Naweek at 20h30.  The video has a very modern and upbeat vibe and shows viewers a whole new side of the singer. “Sharoney has always been willing to try new things and I believe this will be a big step forward for her and her career. And this is only the beginning,” says Fathom Media’s Jay Loots.

According to Sharoney, the aim of this video was to do something in Afrikaans that has not been done before. That is why they decided to go for a Pop dance music video that complies with international standards. “We don’t often see Afrikaans music videos that include months of practice, tailor-made clothing and choreography with other dancers, which makes this one very unique,” says Jay.

Park Bench Studio was the perfect setting to bring this idea to life and Sharoney and her four backup dancers do a brilliant job of making listeners feel part of the fun on-screen atmosphere. “The only message this music video holds, is that life should be enjoyed and lived to the fullest. You should not stand back for any challenge or be afraid to be bold and brave. We made use of various bright colours and textures to highlight the theme of the video,” the artist explains.

SHARONEY definitely needs no introduction in the Afrikaans music industry. Over the past five years, she has not only managed to conquer the hearts of local music lovers, but also released two Ghoema and Huisgenoot Tempo nominated albums and seven big radio hits.

21 VIR EWIG (21 FOREVER) follows in the successful footsteps of her previous release, Crush, which was very well received and can still be heard on the radio. The music video has already had more than 40 000 hits on YouTube and is extremely popular with younger audiences.

Crush was the third release from the album, Skyn, which was nominated for a 2018 Ghoema Award for Best pop album by a female artist. The titular track reached the number one spot on Lekker FM’s hit chart. It also spent several weeks in the top ten on Bosveldstereo’s Afrikaans Top 20, the kykNET Top 20 and VCR’s Baanbrekers. The music video is still shown quite often on television.

SHARONEY officially launched her music career in 2014 when her first single, Een Keer, which was written by ADAM’s Hugo Ludik and Reynardt Hugo, started climbing the charts within days of its release.

Her debut album, In Ons Fairytale, was released shortly thereafter. It too, was an instant success and earned her two Ghoema nominations (Newcomer of the year and Best pop album by a female artist), as well as a Huisgenoot Tempo nomination (Newcomer of the year) in 2015. Prinses, her second single penned by Hugo Ludik and Reynardt Hugo, was also very popular and received substantial radio and television airtime. The third and fourth singles, Fairytale and Wees My Held, followed. These songs secured her spot in the hearts of listeners and helped build on the success she had already achieved.

The artist has become a regular performer at functions and festivals all over the country. She is currently busy with the final recordings for her upcoming album, which is scheduled for release in 2020 and is thankful about each opportunity that comes her way.

Although 21 VIR EWIG has a young and carefree vibe, it also showcases how much SHARONEY and her music have grown over the years. It serves as the perfect introduction to the new and exciting things that she has planned for the future.