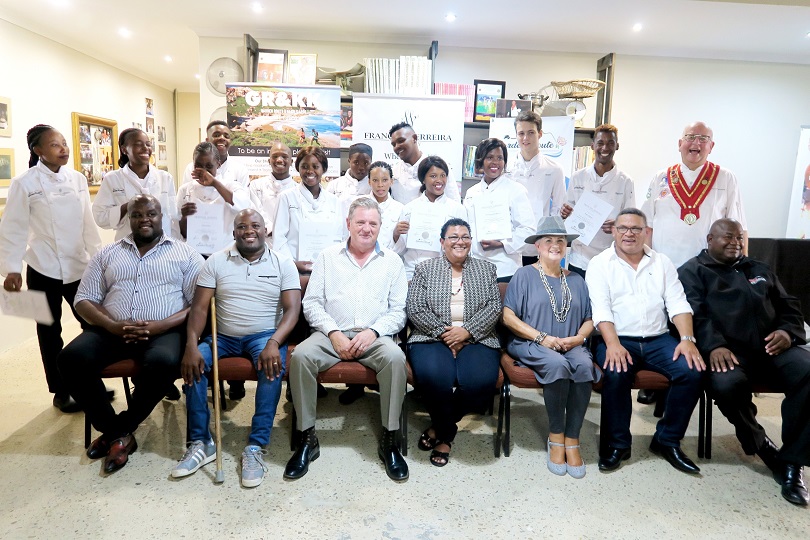 Friday, 31 January 2020, marked another prestigious highlight for representatives of the Garden Route District Municipality (GRDM) and the Francois Ferreira School of Culinary Art, when they witnessed the graduation of seventeen (17) Cater Care students from the Garden Route, in the presence of their parents.

The ceremony took place at the Francois Ferreira Academy, which is located at the Mount View Resort in George.

The purpose of this collaborative programme between GRDM and the Francois Ferreira Academy is to address the high rate of unemployment within the Garden Route district through the Cater Care Training programme.  The course commenced on 4 September 2019 and concluded on 29 November 2019. During this period, the programme required all students to attend classes from Mondays to Thursdays from 8:30 to 15:00. It was expected from each student to attend class in uniform supplied to them while in training at a wing of the academy which is based in Oubaai, George.

“Take your eagle wings and fly”

During her keynote address at the event, Executive Deputy Mayor of GRDM, Cllr Rosina Ruiters, said: “A total of R350 000 was funded by the GRDM to train previously disadvantaged individuals in the Cater Care Programme with the intent to equip people to access jobs in the local Hospitality industry and Tourism sector”. She furthermore shared a motivational message with students and referred to the story of the eagle that was raised by a chicken and explained: “The chicken found a lost egg not knowing where it came from and then brooded the egg to become like a chicken”.  With these words Cllr Ruiters encouraged all students: “Take your eagle wings and fly – do not become a chicken”.

At the event, it became evident, that this journey was not only for students to be awarded with another certificate, but it served as proof of their overall passion and enthusiasm for the industry. This became known when two former students, Jackson Lencoe and David Griffins, shared their personal stories with the audience. Lencoe encouraged the students with the words: “If you want something, you have to be relentless and creative.” He furthermore shared words of appreciation to the Academy and GRDM who helped him discover the chef in him.  David Griffins furthermore said:  “I appreciate the opportunity provided to me” and shared these words with the students: “When I entered the academy, I knew nothing about being a chef, but with positive attitude and determination, everything else will follow; I learned, practised and never gave up,” he concluded.

Adding to the words of Cllr Ruiters and the former students, the Head of the Academy, Mr Francois Ferreira, applauded all members of the team for their sheer commitment and congratulated them with the following words: “All of you worked very well throughout the course. We could see it in your theory and practical marks, with the lowest class percentage of 67% and the highest at 91%. Very well done”, he cheered. Mr Ferreira also sensitised all students and said that now becomes the harder part of finding permanent employment. To all who are not employed, he said: “Search for opportunities who fits your skills set and to students who are already employed, he said: “Look after your jobs as it is so skaars soos hoendertande“. He concluded: “You must have the right attitude and the right work ethic. Work hard at creating your career with the opportunity provided to you by Garden Route District Municipality”.

The ceremony concluded when Mr Ferreira extended a word of gratitude to the representatives of GRDM when he said:  “Thank you for taking hands with us to improve the lives of our youth in the Garden Route”.

Councillors and Management of Garden Route District Municipality and Mr Francois Ferreira, Head of the Francois Ferreira Academy of Culinary Arts, with the Cater Care students who graduated on Friday, 31 January 2020 in George.