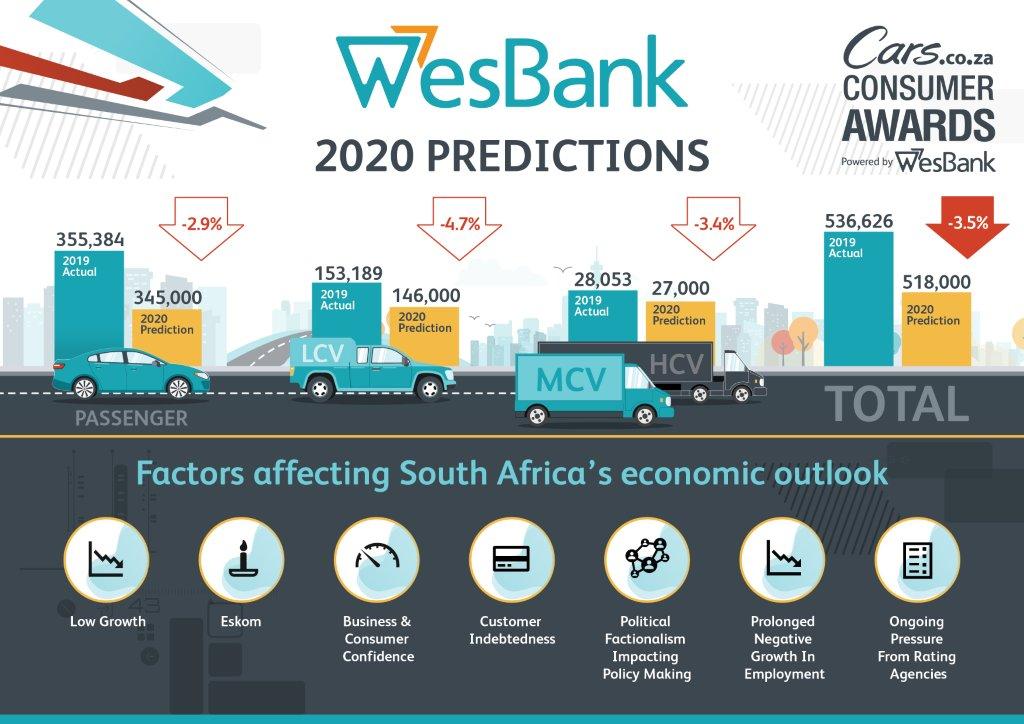 WesBank CEO Chris de Kock delivered the bank’s view of the market and its annual sales forecast at the 2020 Cars.co.za Consumer Awards in Midrand, Gauteng, yesterday.

Given the economic and political challenges facing the country, it is likely that both business and consumer confidence will remain subdued.  However, the strong growth of vehicle exports continues to underpin the key role that the South African motor industry plays in the South African economy and, despite the challenges, is in a relatively healthy state.

“This is expected to be another challenging year for the motor industry, driven by low demand from both the retail and corporate market,” said Chris de Kock, CEO, WesBank. “A 3.5% decline would mean a reduction of 18 626 sales across all categories, however, we can still look forward to continued growth in exports, earning valuable foreign income for SA.”

Predicting market trends has become very difficult with extreme market volatility as seen in 2019. De Kock indicated that last year ended slightly stronger than we had anticipated and was impacted by the aggressive incentive structures put forward by the brands in order to move vehicles that had been ordered.

Breaking down WesBank’s forecast, De Kock said the decline would come from passenger cars and light commercial vehicles. “As always, the new passenger vehicle category will contribute the largest decline, with an expected

Affordability remains the number one factor influencing new car buying decisions in South African households. Rand fluctuations, volatile fuel prices, the inevitable rise of electricity and other utility costs, a possible increase in VAT and rampant unemployment figures continue to haunt us. In the short term this will drive the trend of consumers buying down (opting for cheaper derivatives), and continue to create demand for used cars. In light of buyers’ sensitivity to expenses, people are also holding on to their vehicles for longer. WesBank’s average deal now runs for 45 months, up from the traditional three-year buying cycle that we have become accustomed to. “This will continue to put pressure on new vehicle sales during 2020,” said de Kock.

“South Africa is not alone in this predicament; the sale of vehicles globally fell sharply in 2019 after a modest fall in 2018, and are expected to fall again in 2020. This follows almost a decade of growth since the financial crisis, reflecting the pressure on the global economy,” concluded de Kock.

CAPTION: In black and white: predictions for 2020. Infographic WesBank/Motorpress