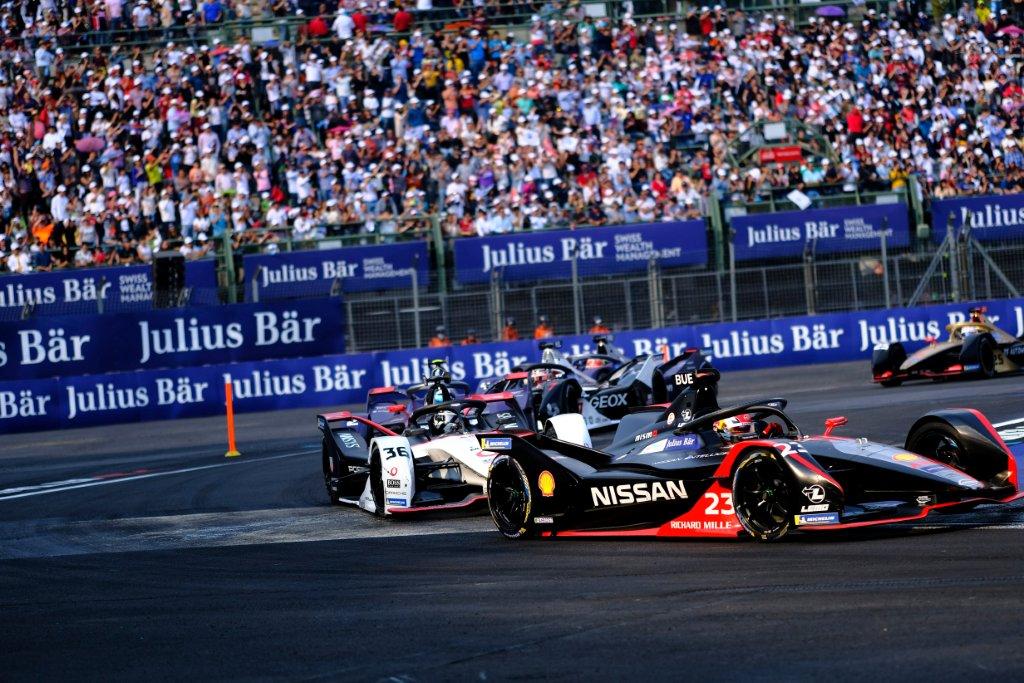 Brian Joss – Nissan e.dams team driver Sebastien Buemi battled hard and held his nerve to take a third place in an intensely fought Mexico City E-Prix. Round four of the championship, held at the redesigned and faster Autodromo Hermanos Rodriguez circuit, saw numerous contacts at the head of the field throughout the race, but Buemi in car #23, used his Attack Mode wisely and avoided the incidents around him.

Backing up the team’s first podium of the 2019/2020 campaign, Oliver Rowland in car #22 scored a valuable six championship points crossing the finish line in seventh position, from 12th on the grid. The team took a total of 21 championship points away from Mexico City. https://www.youtube.com/watch?v=gSetPUNEYOU&feature=youtu.be

Enveloping the racing action around the circuit was a sea of color, sound and excitement as the Mexican motorsports fans turned out in their thousands to fill the grandstands and E-Village, where Nissan again engaged them with a prominent and vibrant activation around Nissan Intelligent Mobility.

Nissan is using the all-electric street-racing championship to demonstrate the performance side of Nissan Intelligent Mobility, the brand’s vision for changing how cars are driven, powered and integrated into society.

Buemi secured his third Super Pole qualifying session of the season, starting from fourth position on the grid, and ran as high as P2 before taking the checkered flag in third position, putting on an exciting show as he diced with the competitors around him.

“To have our drivers finish well within the top 10 here in Mexico City is a great feeling for the whole team, and richly deserved after the solid pace and unending commitment they have shown here,” said Nissan global motorsports director, Michael Carcamo.

“Seb’s hard-fought podium feels like payback for the opportunities we missed at this race last season, and to spray the champagne in Mexico City in front of these wonderful fans is a moment we’ll treasure.”

The team travels to Marrakesh at the end of the month for round five, and a driver test session following race day. Nissan e.dams reserve and test driver Mitsunori Takaboshi (JPN), and simulator driver Jann Mardenborough (GBR) will take part in the test session.

“The drivers did a great job here in Mexico today, capitalizing on the car’s speed and consistency to finish higher than their grid positions, avoiding racing incidents and bringing home a strong haul of championship points. I am proud of our team today and we look to the next round in Marrakesh with renewed energy,” said Nissan e.dams team principal Olivier Driot. Sebastien Buemi, said:  “Finally, a good race for us and a great result for the team. I’m trying to enjoy it as much as possible after what happened here last year, but it’s certainly really special to clinch a podium here.

Hopefully it’s the start of a run of good results for us and we look ahead to Marrakesh.” Said Oliver Rowland:  “Not a bad race, it’s just hard when you start in the middle to get a rhythm and around people cleanly. We scored valuable points for the team and Seb’s podium is great. I’m out of qualifying group one and into Q2 next time, which gives me more chance to qualify towards the front, so I’m reasonably happy. Of the first four races, the potential’s there to run well, we still haven’t gotten there but I’m confident it’s going to come good.”