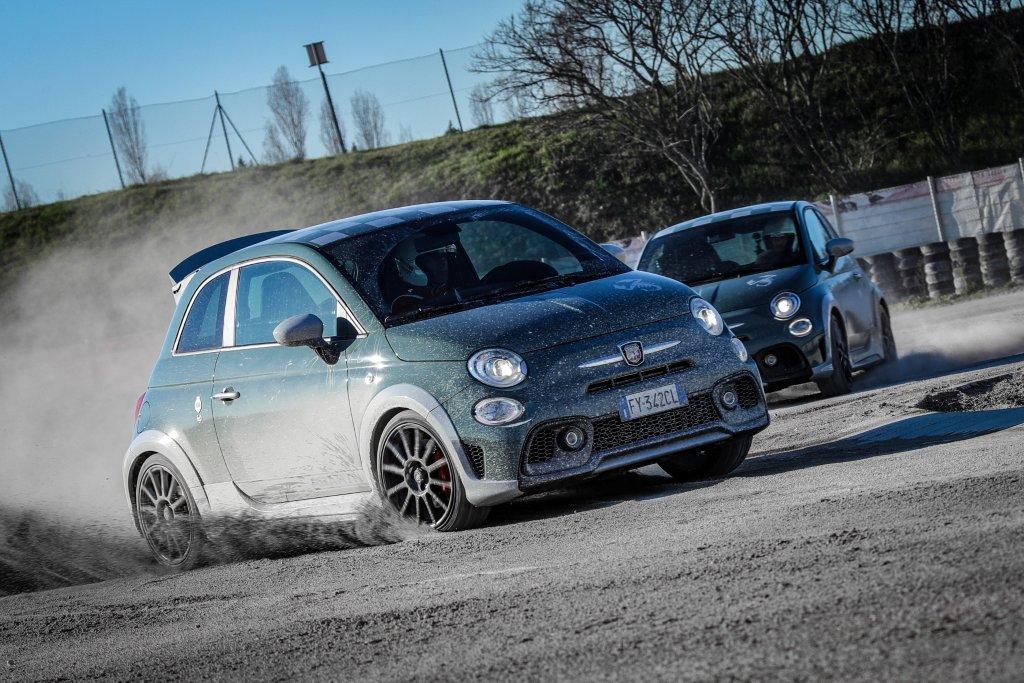 Brian Joss – Andrea Nucita, winner of the 2019 Abarth Rally Cup with the Abarth 124 rally, and the young Norwegian driver Dennis Hauger, who was victorious at the Italian F4 Championship powered by Abarth 2019, competed aboard the 695 70° Anniversario, to crown the “champion of champions”.

The challenge was evenly matched, with the two specialists driving simultaneously on the racetrack and on a dirt track, each with an advantage by driving on their own terrain.

Their two driving styles were in clear contrast. A racetrack requires precision, continuity and the ability to harness the engine’s full power, along a precise trajectory. A dirt track requires an ability to improvise, to control any skidding and, despite the difficult road surface, to be more efficient in search of performance while taking advantage of skills in stability and traction. Even so, there was only one objective: to be the faster of the two.

Luca Napolitano, Head of EMEA Fiat and Abarth Brands, commented: “We wanted to end the 2019 season and begin the 2020 one with an unusual challenge. Andrea and Dennis are two different drivers in terms of the driving features, style, experience. They clearly come from two divergent car categories, but with a lowest common denominator: Abarth at their heart. We put them in the driving seat of the new 695 70° Anniversario and the result was fantastic.” Napolitano went on: “All Abarth drivers and teams, both on the tracks and in rallies, are fundamental to our research and development work. In fact, for us, racing represents a stringent battery of tests for technological solutions, which we then sometimes use in series production. In 2020, our commitment to racing will continue both on the track with Formula 4 in Italy and Germany, and in rallies, at the European Rally Championship and the Abarth Rally Cup. We love to test ourselves and improve on a daily basis, just as Carlo Abarth taught.”

The day was all about a spectacle behind the wheel of the fun, high-performance Abarth 695 70° Anniversario. Both drivers took the curves of the challenging Romagna circuit with great showmanship, braking at the last possible opportunity and skidding during acceleration. The car proved itself able to adapt to both Nucita’s more acrobatic driving and to Hauger’s more precise run. The result was a draw. At the end of the day, both drivers were crowned “Champion of Champions”.

Registrations are open for the second Abarth Rally Cup*, held alongside the Abarth 124 rally as part of the European ERC Championship, with a total prize fund of €210,000 for the six prestigious events selected for the FIA-ERC 2020 calendar:

The Italian F.4 season starts on May 17 at Monza and includes seven events of three races each. The German F.4 championship begins on April 26 at the Oschersleben circuit, also with seven events scheduled.