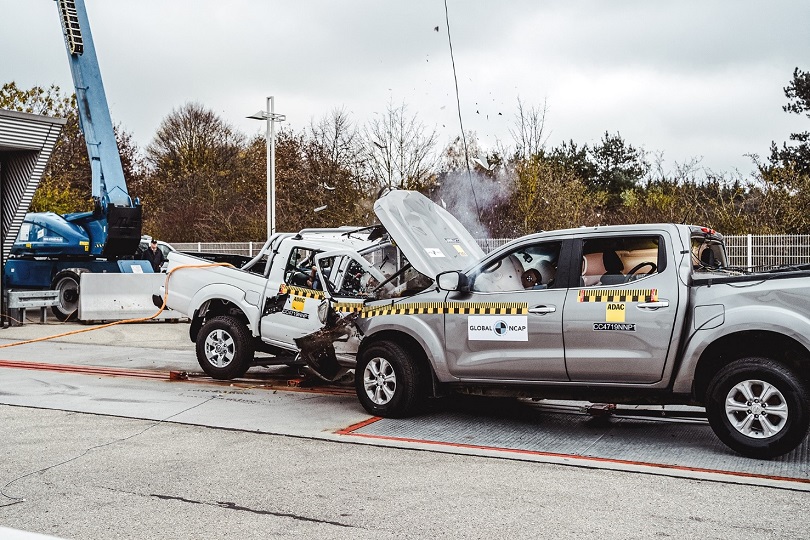 Brian Joss – In the first test of its kind, Global NCAP has crashed the best-selling pick up model in Africa, the 2019 Nissan NP300 Hardbody, into a second-hand Nissan Navara NP300 manufactured in Europe in 2015.

The unique car to car crash test graphically demonstrates the double standard currently applied by Nissan and other car makers to vehicle safety in Africa.

Launched to coincide with this week’s 3rd Global Ministerial Conference on Road Safety in Sweden, both of the crashed vehicles will be on public display as part of the ‘People’s Exhibition’ in Stockholm Central Railway Station. Global NCAP is partnering with the Global NGO Alliance for Road Safety in hosting the exhibition. The call to action from the #50by30 themed display will be the adoption of a new target to halve road deaths and serious injuries by 2030 by governments worldwide.

David Ward CEO and President of Global NCAP said, “This is a very dramatic car to car crash test which uniquely illustrates the double standard in vehicle safety performance between models sold in Europe and those sold in Africa.

“A new car in Africa is not necessarily a safer car. Second-hand imported cars from regions with tougher regulatory requirements for safety, and environmental performance, can offer consumers much greater protection.

“Our aim in publishing this crash test result to coincide with the Global Ministerial Conference in Sweden is very clear. As we approach the end of the first UN Decade of Action for Road Safety, and set an agenda for the next ten years, the double standard demonstrated by an auto manufacturer such as Nissan with the NP300 in Africa is utterly unacceptable.”

Saul Billingsley, Executive Director of the FIA Foundation said, “Does Nissan believe an African life is worth less than a European life? If not, how does the company explain the shocking safety gap between these two vehicles demonstrated by Global NCAP? If we are to meet the 2030 target of halving road deaths we must stamp out this kind of unethical behaviour by some in the car industry.”

“What this car to car crash also demonstrates is a complete disdain for African vehicle consumers and their safety at the expense of profit. It also again highlights the need for stricter regulation of standards and tougher controls in terms of allowing these inferior vehicles on to African roads.”

“On a final note, we endorse David’s sentiments that higher safety-rated second-hand vehicles are a better option than lower-rated new vehicles, especially in light of these poor results which clearly show the devastating impact on families and society of inferior models which are sold in Africa.”

The Nissan NP300 was previously tested by Global NCAP in 2018 as part of the #SaferCarsForAfrica campaign and received a zero star safety rating. The vehicle structure collapsed and was found to be unstable during the test. The high forces placed on the crash test driver dummy pose a significant risk of fatal injury.

The NP300’s bodyshell was so unstable that the airbags were ineffective.

The Nissan Navara NP300 was previously tested by Euro NCAP in 2015 and achieved a four star adult occupant rating.