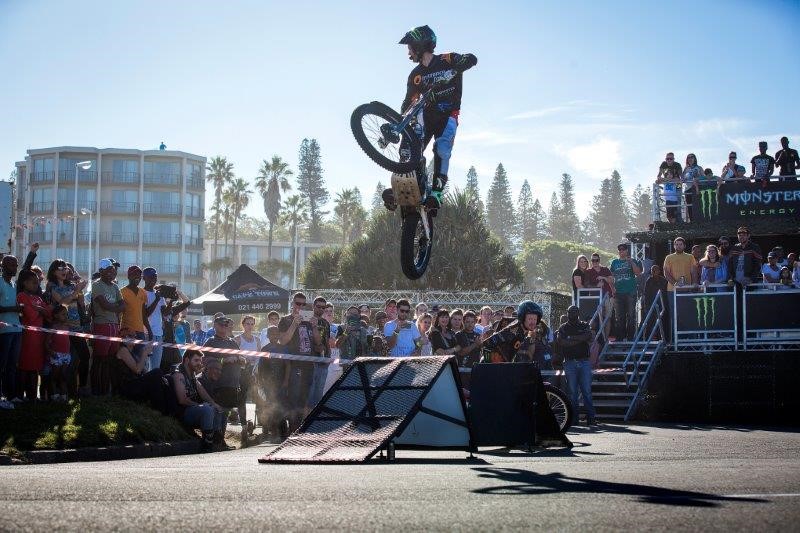 South Africa’s biking elite will be converging for the continent’s best rocking and riding festival, Bike Fest SA™, with Jeffrey’s Bay Bike Fest™ the first stop on this five-stop biking tour, wheeling into town from 28 February to 1 March 2020.

This family-friendly festival, held in partnership with Kouga Municipality, is open to bikers and non-bikers alike – but the unstoppable biking programme is set to rev the engines of all festival attendees.

For some extreme two-wheeled action, Jeffrey’s Bay Bike Fest™ has all the wildest stunts, tricks and edge-of-your-seat moves performed by the most daring of South Africa’s bikers. Catch two national biking heroes in the captivating Le Riche Brother Stunt Riders show (12pm and 4pm daily) where extreme precision and high-pressure make for some world-class biking stunts. Then it’s time to roll out the red carpet for Alfred ‘King Donut’ Matamela (10am and 2pm daily), a master biker who evolved from Limpopo cattle herder to Brand Ambassador for Yamaha. And it’s also open to the crowd as bikers get the chance to burn some rubber and smoke the crowd at the Burnout Pit (10am to 7pm daily).

The honourable mayor, Horatio Hendricks, of Kouga Municipality, will ride alongside renowned biker and local event organiser, Dean Gilbert, to lead the Mayoral Mass Parade which sets off from the parking lot of Neptune Terrace on Sunday, 1 March at 10am. To set things in motion, the talented young musicians of the Brigade Brass Band will lead the Mayoral Mass Parade which will consist of a cross-section of South African biking clubs flying their flags and following the 22.6km route, ending at Jeffrey’s Bay Caravan Park. This inspired biking parade will also serve as a fundraising initiative for the Benevolent Fund.

It’s all about the fun at this year’s Power Play where attendees will get the chance to showcase their biking talents and physical prowess with Wheely Machine contests (10am to 7pm daily), Dyno Machine contests (10am to 7pm daily) and the age-old Arm-Wrestling Power Table. Then biking clubs can go head-to-head (or wheel-to-wheel) in the Club Tug ‘o War zone (10am to 5pm daily), with some simulated racing action on the cards with Virtual Reality Bike Racing (10am to 5pm daily).

Throughout the Jeffrey’s Bay Bike Fest™, South Africa’s best musicians will keep attendees rocking at the Bike Rocker Stage. Top-class musicians will feature on this programme, including award-winning South African rock band, WONDERboom (Saturday, 29 February at 1.15pm); the big-haired drumming/singing dynamo rock sensation, Ghapi (Sunday, 1 March at 11.15am); and the guru of Afrikaans rock music, Koos Kombuis (Saturday, 29 February at 7.15pm)…among many others!

Some other Jeffrey’s Bay Bike Fest™ highlights include:

Get ready to rock and ride at this premier biking festival! Check out www.bikefestsa.co.za to book your tickets and accommodation now, or visit the ‘Bike Fest SA’ Facebook and Instagram pages for all the latest updates.