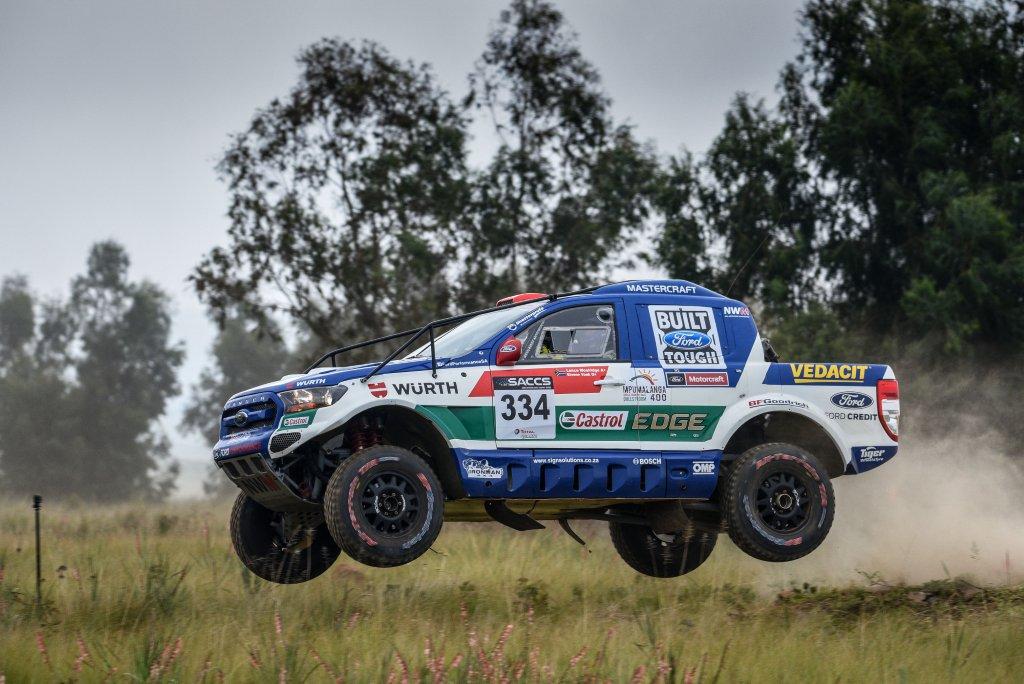 Brian Joss – The Ford Castrol Cross Country Team got its new campaign in the premier FIA-class of the South African Cross Country Series (SACCS) off to a great start this weekend, as Lance Woolridge and co-driver Elvéne Vonk (#334) claimed a podium position at the season-opening Mpumalanga 400 in Dullstroom.

The pair conquered extremely wet and muddy conditions to secure third place overall and in the FIA-class after 378km of racing – an impressive feat, considering they are racing the same V8- powered Ford Ranger in which Woolridge claimed his second consecutive Class T title last year, with little more than upgrades to the brakes, the use of the latest BF Goodrich KDR2+ racing tyres and some weight-saving measures to make it more competitive against the higher-spec and faster FIA entries.

Going up against the largest FIA-class field yet seen in the SACCS with 14 vehicles joining the starting line-up, the Neil Woolridge Motorsport (NWM) built and run Ford Ranger was fourth quickest during Friday’s 64km sprint qualifying session.

While the conditions were mostly dry for the Friday prologue, the heavens opened in the afternoon with the rain continuing throughout the night and most of Saturday. This made the first of the 157km race loops between Dullstroom and Belfast particularly treacherous, with lots of standing water and numerous slippery sections ready to catch the drivers out.

Woolridge and Vonk completed the first stint without incident, and had made up two places by the time they returned to the service park, placing them second overall behind reigning FIA-class champions Henk Lategan and Brett Cummings (Toyota). The Ford crew came into the pits five seconds ahead of former Dakar Rally winner Giniel de Villiers and co-driver Alex Haro Bravo in the second factory Toyota after they encountered brake issues, and had also passed the Toyota of Chris Visser and Danie Stassen in the stage.

Baumgart and Cincea weren’t quite as fortunate, as their charge was cut short due to a snapped left-rear side shaft 60km into the first loop. They managed to limp back to the pits and the NWM technicians set about replacing the shaft so they could restart for the second loop, albeit near the back of the field with a hefty time penalty.

The second loop was all about the constantly changing weather, with the crews having to contend with varying surfaces ranging from slippery mud and grass to punishing rocks, vast expanses of standing water and unpredictable forest sections.

With the teams setting off at two-minute intervals, and Lategan leading from the front, there was an exciting tussle for runner-up position between Woolridge/Vonk and De Villiers/Haro Bravo – although the Toyota crew had the upper hand in the quicker full FIA-spec vehicle, and set the fastest time on lap two to claim the advantage.

The Ford Ranger crew were an impressive second quickest on loop two and had a faultless run to the finish to secure an outstanding third overall. It was a superb effort from the newly paired Woolridge and Vonk – particularly as they outclassed the rest of the FIA-class field, and scored valuable championship points in the process.

“Finishing on the podium on our first outing in the FIA-class with what is basically a Class T vehicle is an absolutely brilliant result for the team,” said NWM team principal, Neil Woolridge. “The constant improvements that we’ve made to our Ford Rangers over the years has certainly paid off, as we were only 2 minutes behind De Villiers, and 4 minutes 30 seconds behind Lategan.

“Lance and Elvéne did a superb job in their first outing together,” he stated. “They ended a full 10 minutes ahead of the first Class T competitor which shows how quick they were, and also how good our car is. It also bodes well for later this year when we start racing our all-new FIA-spec Ford Ranger with the 3.5 EcoBoost engine.”

Lance Woolridge was equally delighted: “We had a great race, and although the rain made the route very unpredictable and extremely slippery in places, especially on the second loop, we didn’t have any issues. Elvéne did a great job, and our battle with Giniel on lap two was lots of fun. It’s fantastic to end our first race on the podium, as we know that we’re at a disadvantage to the established FIA cars, so for now, our goal is to score as many points as possible.”

Despite their mechanical issues at the start of the race, Baumgart and Cincea posted the sixth fastest time on the second loop – even though it was their first and only sighting of the full race route. They were eventually classified ninth in class.

“We felt good during Friday’s qualifying and were going well until the side shaft broke on the first loop,” explained Cincea. “The team did a great job to get the car repaired, and we really enjoyed the second loop. Even though we had to pass five vehicles and lost quite a bit of time, we had a good pace and were very happy to be sixth on this stage.”

Ford and Neil Woolridge Motorsport continue to maintain a strong presence in Class T with the V8-powered Ford Ranger, and are backing three privateer teams in this category.

Malcolm and Frans Kock were the fastest of the Ford NWM entries during Friday’s qualifying session, ending second only to former champions Johan and Werner Horn (Toyota). Wors Prinsloo and Andre Vermeulen qualified fourth, ahead of Jacques van Tonder and Sammy Redelingshuys in another Ranger.

Although they had a strong charge on the opening loop of Saturday’s main race, Malcolm and Frans Kock, unfortunately, retired with drivetrain issues mid-way through the event. Prinsloo and Vermeulen went on to score a popular third-place finish in Class T – their first national championship podium – with Van Tonder/Redelingshuys classified fifth.

The next race is the Sugarbelt 400 which takes place in Eston, KwaZulu-Natal, on 3 and 4 April.

Follow the team’s updates and progress on the following social media channels: