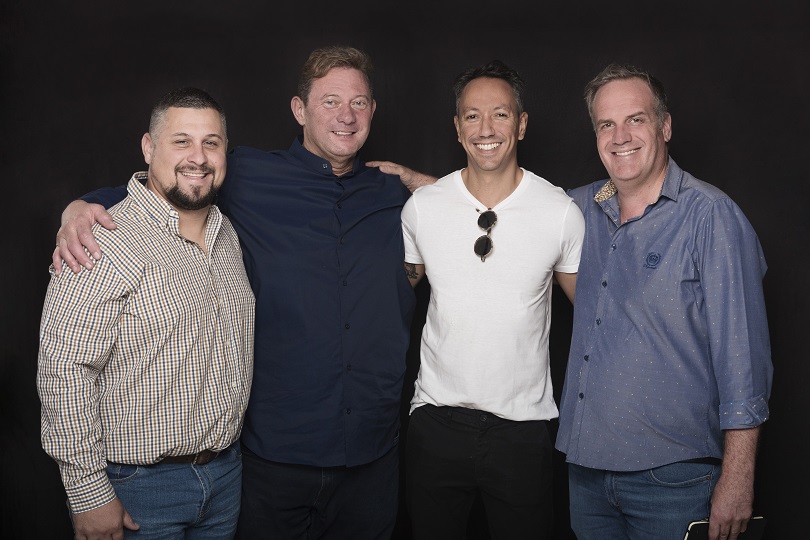 The story of a young conscript who battles to survive compulsory service in apartheid-South Africa’s military while confronting toxic masculinity and coming to terms with his sexual orientation, premiered at the Venice Film Festival in September of last year. Since that sold-out performance in Italy, MOFFIE and Hermanus have garnered high praise from critics and audiences across the globe.

In recent weeks, in anticipation of the film’s South African premiere on 13 March, 2020, Hermanus shared and discussed the film with a select few gay men for whom he has great admiration, and sat down to talk about their experience of the word “moffie.” These conversations form part of the #calledamoffie campaign by Portobello Productions – the team behind the movie – to denuclearize the word and the hurt it has caused so many people. Videos of these conversations are available to watch on the film’s website, www.moffiefilm.com and features actor Armand Aucamp, comedians Marc Lottering, Pieter-Dirk Uys and Casper de Vries, TV and radio personality Rian van Heerden, politician Siphesihle Dube, fashion designer Lukhanyo Mdingi, business consultant and founder of the Gay Pages, Rubin van Niekerk, sexual health activist Phumlani Kango, and Damian Engelbrecht, the first openly gay contestant on the reality series Boer Soek ‘n Vrou. Among the topics the videos touch on, is how the word “moffie” has affected their lives.

“You had to separate yourself from the word. You had to live as if you were straight,” recollects comedian De Vries. “I like the title,” he adds. The rural Afrikaner community, he speculates with a wry smile, are going to do a double-take. “What the hell is this? Oh, no! Sies man!” And that is the power of the movie’s title, says De Vries. “It’s brilliant. It is out in the open. There it is.”

Of his decision to select MOFFIE as the title, Hermanus says it is not just about the word itself – more so its impact. “I’ve always been conscious of my intention to make a film called MOFFIE. The only place in the world where that word means anything is here, South Africa. I have toured this film, and continue to tour it around the globe but its most affected audience, its intended audience, is my fellow South Africans.”

Hermanus adds: “There is a very particular moment in this film that I draw from my own lived experience. Of course, I adapted it, but it was a moment in my life that defined me for a long time.” This motivated him to share the film with De Vries and others. “Our power as storytellers is to create awareness and discussion, to activate a conversation and share ideas.”

Pieter-Dirk Uys is excited by the title, and says it is one way to start diffusing the pain of the word. He first heard the word “moffie” on a church balcony, he recollects. He was called many names at school, he says, and “somewhere in the mix came the word ‘moffie’.” “I didn’t know what it was, but it sounded nice…sounded like a name you give a small cat, you know?”

After watching the film, actor Armand Aucamp called MOFFIE a “painful must-see”. “MOFFIE is a brutal truth-telling story of how warped ideas about masculinity have terrorized society and the power of a word like ‘moffie’.”

Ultimately, Hermanus says, he hopes these conversations will help to diminish the destructive effects of the word. To this end, he also encourages people to share their stories with others on social media with the hashtag #calledamoffie.

Herewith the links to all the interviews, please feel free to share on your platforms:

MOFFIE is produced by Portobello Productions and Penzance Films.

To pre-book your tickets for MOFFIE visit https://www.moffiefilm.com/tickets