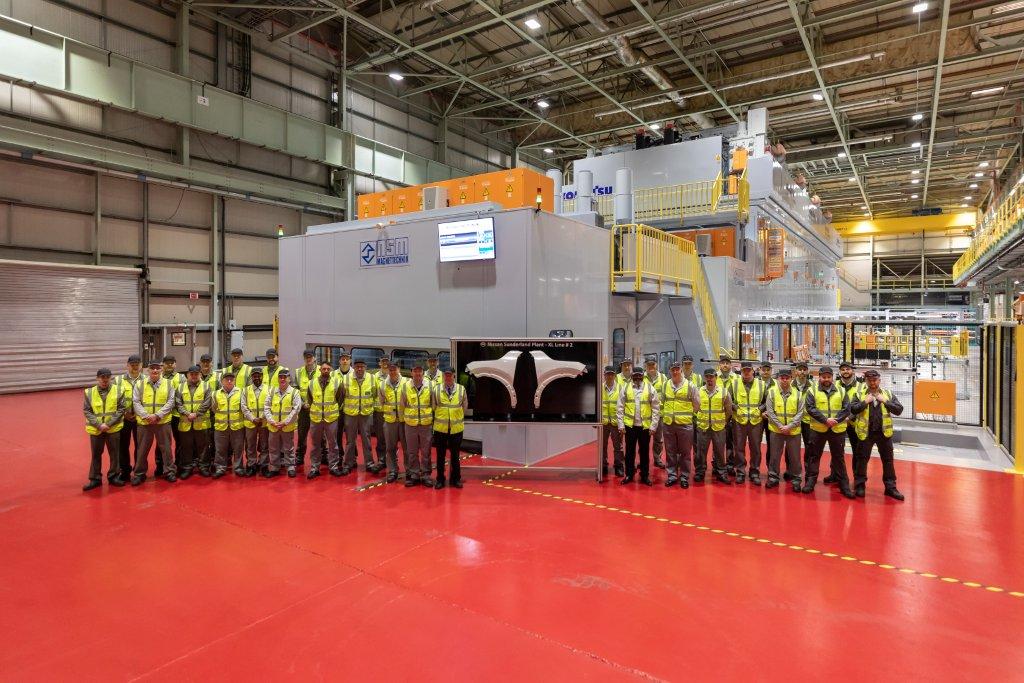 The press, which weighs more than 2,000 tonnes and has taken 18 months to install, is part of a £400m investment by Nissan in readiness for the new Qashqai, which will be the third-generation of the pioneering crossover.

The first specially commissioned panels on the press were produced on last week at an official ceremony, led by Nissan Chief Operating Officer Ashwani Gupta, who said: “When the first Nissan Qashqai rolled off the line in Sunderland in 2006 it created the crossover segment.

“Designed, engineered and made in the UK, and more than three million vehicles later, it remains the benchmark, just as our team in the UK continues to set the standard for productivity and quality.”

The £52m investment in the new press includes a new recycling system to segregate and process scrap, and upgrades to the existing blanking line which will supply flat blanks (the sheets of metal that are ready to be pressed) to the XL press. It is capable of stamping more than 6.1million vehicle panels a year, with a maximum combined force of 5,400 tonnes, all to pinpoint accuracy.

As part of the opening ceremony today, the whole team behind the press project signed the first panel – a fender for the new Juke.

March 2020 marks the tenth anniversary of the first Juke to roll off the line in Sunderland, when its daring styling broke the mold in the Bsegment.

The all-new version has been made exclusively in Sunderland since October last year, bringing new levels of technology and connectivity to the compact crossover category.

Steve Marsh, Vice President, Manufacturing, at Nissan Sunderland Plant, said: “Watching the first perfect panels coming off the press was a proud moment, and is a reflection of the tremendous skills we have here on Wearside.

“Juke is an iconic model. I know I speak for the whole plant in saying how proud we are to see the fantastic new version out on the roads, and that we are determined to keep delivering it to the quality levels our customers have come to expect.”

The £400m invested for Qashqai comes on top of the £100m invested for the launch of new Juke, and is part of an overall £1bn planned investment into the plant by Nissan over five years. To support certain elements of the £400m investment, Nissan has received support from the UK Government’s Department for Business Energy and Industrial Strategy.

CAPTION: Pressing on: part of £400m investment in facilities in preparation for new Qashqai. Picture: Motorpress