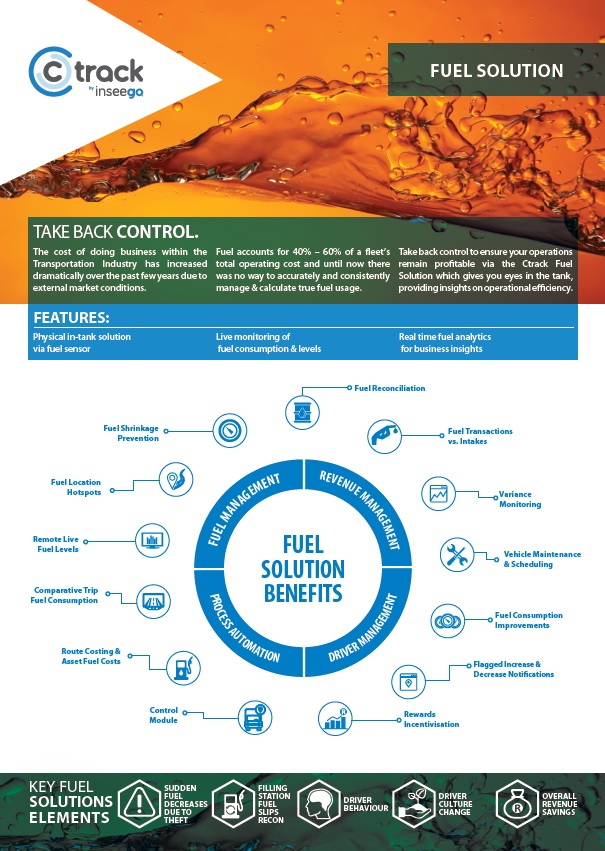 Brian Joss – With the flagging economy and the ever-present pressures that current fleet operators and freight and hauling companies face, the emphasis on productive fleet operations and fleet management has become the number one priority.

Until now the biggest expenditure for transport companies, which equates to between 40% and 60% of a the total operating cost,  is fuel. It is fair to say that diesel has become liquid gold. There is nothing so easy to sell nor so at risk of pilferage.

When it comes to fuel monitoring, there are four types of fuel sensors in use today: flow-type sensors; CAN bus injector and float systems; float sensors and capacitive fuel sensors.

Ctrack believes the latter method is the most reliable means to monitor fuel use and is using a capacitive fuel probe to accurately measure and record fuel consumption in long haul trucks.

While many companies claim that they can measure fuel use accurately, Ctrack, performed its own in-field testing, and believes that its new offering at 98% is the most accurate solution available.

Specialized installation data is fed from the probe to the cloud-based environment and coupled to a Ctrack tracking device, real-time location information allows operators to identify where fuel is being decreased and/or increased.

The digital dashboard gives an overview of fuel use over a period of time, as well as the number of assets and percentages of fuel decreases in each vehicle. The dashboard shows the percentage of decreases, total number of increases and the average volume of increases and decreases. Users can select this information by date, by driver or by vehicle.

In the past, fuel losses became commonplace and losses were budgeted for, but as the economy weakened and margins for truck operators became slimmer, the overwelming need for fuel security and monitoring increased.

A stolen 20 litres or 40 litres of fuel is very seldom noticed if operators have an outdated way of measuring their fuel use, with the bottom line negatively affected especially if there are multiple vehicles in use. This then in turn affects the growth, profitability and sustainability of these companies.

In some cases, the pilferage of diesel can not only lead to profit loss, but also  exposes the Trucks and entire loads to potential fire and other damages during these thefts.

With the fuel management solution, Ctrack said they are now able to provide more accurate fuel usage information, with real-time activity triggers, allowing fleet operators to act and ultimately to save on cost, protect the asset and to remain “Always Visible”.