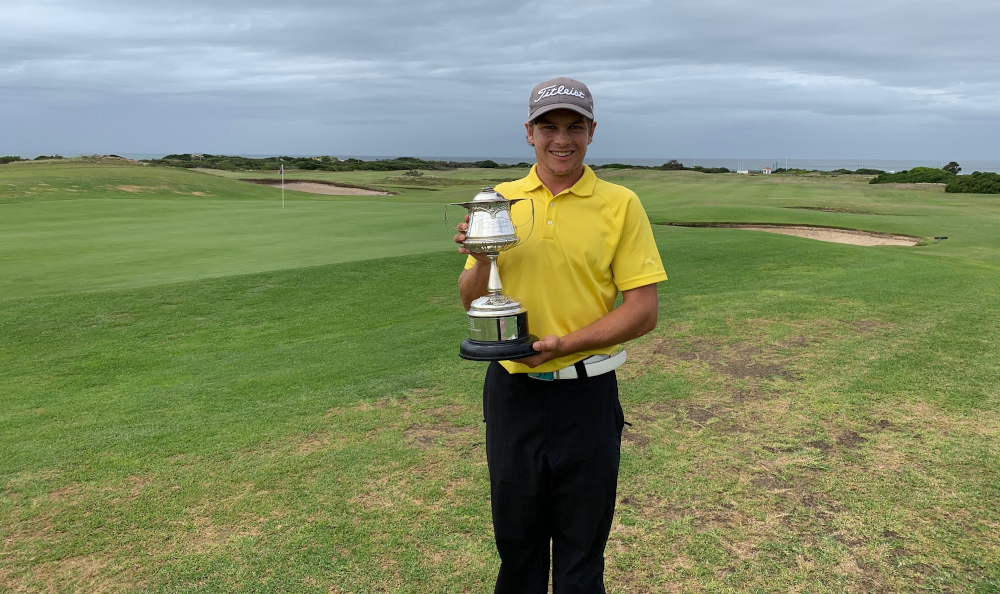 The first-year B.Comm student, a member of the Madibaz Golf Club, took control of the final to defeat his in-form opponent 4/3 after going into the back nine four up.

Earlier he had edged Madibaz teammate Altin van der Merwe in a close tussle during the semifinals, defeating him 1-up.

On Saturday, Van der Merwe had taken the strokeplay section of the champs with rounds of 71 and 69 for a four-under par total of 140.

The 19-year-old Van der Watt, who grew up in George and was educated at Glenwood House, overcame a lack of local knowledge and a faltering start to his semifinal to become the A division winner.

He said it was a matter of persevering against Van der Merwe in the morning matchplay duel.

“That was one of my worst rounds imaginable,” said Van der Watt, who was playing only his fourth round on the links layout.

“I think early on I hit a provisional [ball] off nearly every tee box and I was one down after six holes.

“For example, on the par-four fourth hole, I played to the green from the seventh fairway, but somehow I managed to hang in there.”

Just over halfway through the front nine he said he managed to settle down and find some rhythm.

“It started to go much better. That’s when the match really started between us and I was able to win 1-up.”

In contrast, he said the afternoon final against Zietsman saw him produce one of his best rounds of the year.

“Everything was just solid and I knew Pieter’s game was in a really good space, so I had to try to break him down with excellence of my own.

“I was able to find the fairways, hit solid approaches and make the putts.

“This helped me to turn four up, although it only really started on the par-three sixth. I made birdie there and then birdied the par-five seventh and the ninth.

“From four up with nine to play, you shouldn’t really lose, but I just want to give all the glory to God because I wouldn’t have been able to achieve anything without Him.”

He said it was a pleasure to compete in the Humewood event.

“The tournament was so structured and professional and I really enjoyed playing in it.”

In the B section final Gavin Hogg defeated Robbie Barnard 4/3, while the C division went to Francois Vermaak, who beat Colin Broadley 1-up.

Huisgenoot allowed back on shelf!