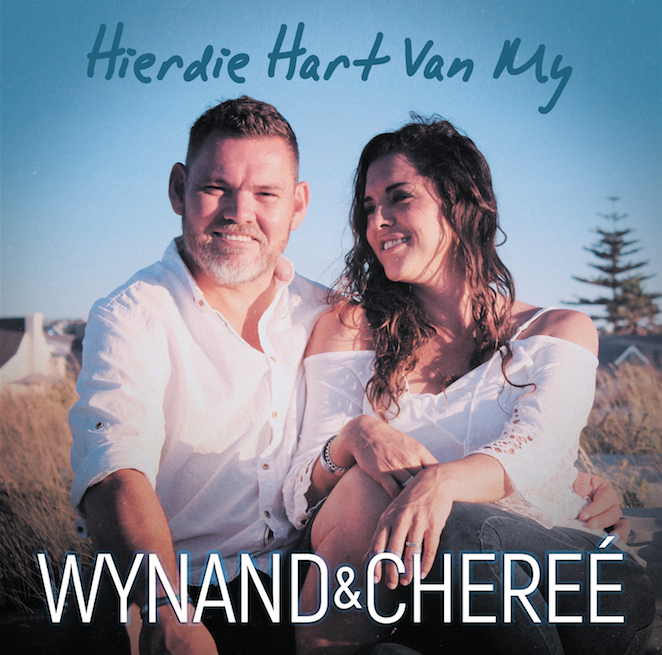 After nearly a decade of silence, South Africa’s brightest Country star, Chereé, released her long-awaited album, Wilde Waters, in 2019. It was extremely well received and can be described as one of the most successful releases of her career so far.

It not only secured her the title of Female Artist of the Year at the 2019 Bokkie Music Awards, but also raked in various other nominations, including Song of the Year and Album of the Year. The music video of the titular track, Wilde Waters, which was filmed by Christian Wolf, has also been seen by thousands of viewers on YouTube.

Now the brunette; and her equally talented husband and singing partner, Wynand Strydom; are back in the spotlight with a brand new single and music video that promises to capture the hearts of music lovers from across the country.

HIERDIE HART VAN MY is a beautiful love ballad, written by Tony Ridgeway, who also wrote the couple’s first duet, Dit Is Ons Lewe. According to the pair, the song perfectly summarises their relationship and how they feel about each other.

“We have been working on this song for five years, but have been waiting for the perfect moment to share it with our fans. This year we are celebrating our tenth wedding anniversary and this feel-good track is the perfect way to commemorate this milestone,” the singer reveals. “We still learn about marriage every day and always say that although we are definitely not perfect, we are perfect for each other!”

Chereé also believes that listeners will be able to relate to the message and that they will enjoy the upbeat tune. “We have learned over the years that a relationship does not come without problems or obstacles, but our secret is that we talk about everything and that there is nothing we cannot overcome together. Our marriage is important to us, and we strive to always be honest with one another,” she explains.

This beautiful song is also complemented by an equally impressive music video, which was filmed by Dry Ink Films in Langebaan. They kept the storyline simple to emphasize the special bond that exists between the couple, which they believe are the winning ingredient in their relationship.

“It is raw and honest. After all of these years it is still easy for us to look each other in the eye. We are actually very privileged, because music keeps the spark alive between us!,” she says. “At a time where people are struggling through a lot of negativity, the message of the song is fresh and sincere! We will continue to work on our relationship and continue to put our marriage and each other first. After all, it’s not too difficult, because after all of these years we are still best friends and support each other in every situation.”

HIERDIE HART VAN MY is the third single from Chereé’s latest album, which consists of thirteen tracks created by the artist herself, as well as other seasoned songwriters such as Rudi Claase, Vaughan Gardiner, Hugo Ludik, Michael Lindt, Tony Ridgway and Roux Cloete.

It follows in the successful footsteps of the titular track, which was written by Rudi Claase, and the pop song, Praat that was produced by Vaughan Gardiner and Hugo Ludik.

Chereé has been performing since the age of nine and released her first solo album at 19. “My parents discovered my voice at a very young age. That means I’ve been in the music industry for 30 years,” she exclaims. “Music has always been an important part of my life. I find solace in it, and I find happiness in it. I am eternally grateful to the people who helped me and believed in me over the years. If there is one lesson this industry has taught me, it is to never give up.”

While a career that spans three decades will undoubtedly include a number of highs, Chereé lists the following as her career highlights: The tribute she performed for Carike Keuzenkamp at the SAMAs in 2010 – during which Carike joined her on stage; performing a duet with Toni Wille, lead singer of the band Pussycat, at Aardklop; and performing as the opening act for Albert Hammond, also at Aardklop. “It was incredible to share a stage with these legends,” says the bubbly artist.

As for what she has planned for the future, the husky voiced artist says: “I will continue to work hard and keep singing! Although there are many challenges in this industry today, I am passionate and it is important for me to keep doing what I love – making music and singing.”

She adds: “Being on stage and performing for people is amazing. If I touch only one person’s heart during a show, then my work is done. It is for the people who support us, who share hugs and kind words at our shows that I continue to sing.

“Of course, my family always takes centre stage. I want to show my children that if you are passionate and you work hard, your dreams can come true.”

Wynand, who grew up in Pretoria, says that he only truly discovered his singing talent after he completed his teaching degree at the University of Pretoria. However, music is in his genes as there are quite a few musicians in his family, including Kupido, Alan Lad, Karen Wessels and Koos van der Merwe.

“Meeting my wife Chereé was certainly one of the greatest highlights of my life. It is wonderful being able to share my musical journey with someone who understands it, and she is my biggest fan, best friend and soulmate,” he says with a twinkle in his eye. The couple has two beautiful children and they have already recorded three duet albums together. Another joint album is being planned for the near future.

Over the past eighteen years, Wynand has certainly cemented his spot in the Afrikaans music industry; he has shared the stage with many well-known artists and has performed at several music festivals. His previous album, Skielik Is Jy Vry, is a stunning tribute to one of the music industry’s greatest legends, Koos du Plessis, and was very well received.

This song is not only proof of both singers’ exceptional talent, but will also remind fans why this couple is and remains so popular with the local crowd.

It is a beautiful single, which celebrates love and will inspire couples to sing and dance along to the inviting tune.