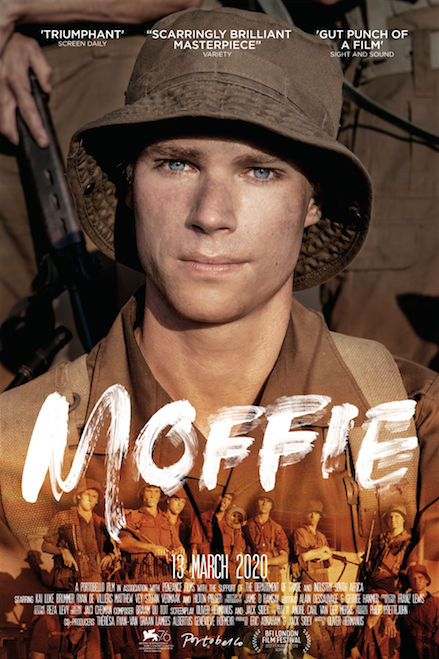 Following the global call for social distancing to slow down the spread of Covid-19, and now the countrywide lockdown, production companies worldwide have sought alternative means to distribute recently released and upcoming films – so too the team behind MOFFIE.

A few weeks ago, the film’s producer, Eric Abraham, as well as director Oliver Hermanus, started a process of creating a Plan B as an alternative means for people to watch the critically acclaimed film at home.

Starting today, MOFFIE, the story of a young conscript who battles to survive compulsory military service in apartheid-South Africa while coming to terms with his sexual orientation, will be available to stream online.

According to Hermanus, Abraham suggested a back-up plan for the film’s release and distribution well before the spread of the virus started to pick up speed and South Africa’s first case was reported. “We really want you all to see Moffie, and over the last few weeks set up a system to bring our film to the safety of your home,” says Hermanus. “You may be stuck indoors, so hopefully we can keep you entertained.”

There are a few things to take note of prior to your purchase of a ticket to stream the film online:

Since its South African release the film has been a major critical success, receiving five-star reviews from major publications nationwide.  Grethe Kemp of the City Press referred to it as “film making at its most powerful”, Herman Eloff – Channel24 called it a “cinematic masterpiece”, Laetitia Pople from Die Burger / Beeld / Volksblad / Netwerk24 complimented the film as “an attack on all your senses”. Pieter van Zyl from Huisgenoot & YOU said that it is most definitely a film to be watched by all and that should touch a nerve with many viewers.

Terry van der Walt from the Sunday Independent said: “Don’t be put off by the name of the movie, because it actually deals with so much more than gay men surviving the army experience.  It is about the human condition, and the frightful things we’re subjected to in life, and the unspoken truths about men and how they relate to each other”.

MOFFIE is produced by Portobello Productions and Penzance Films.