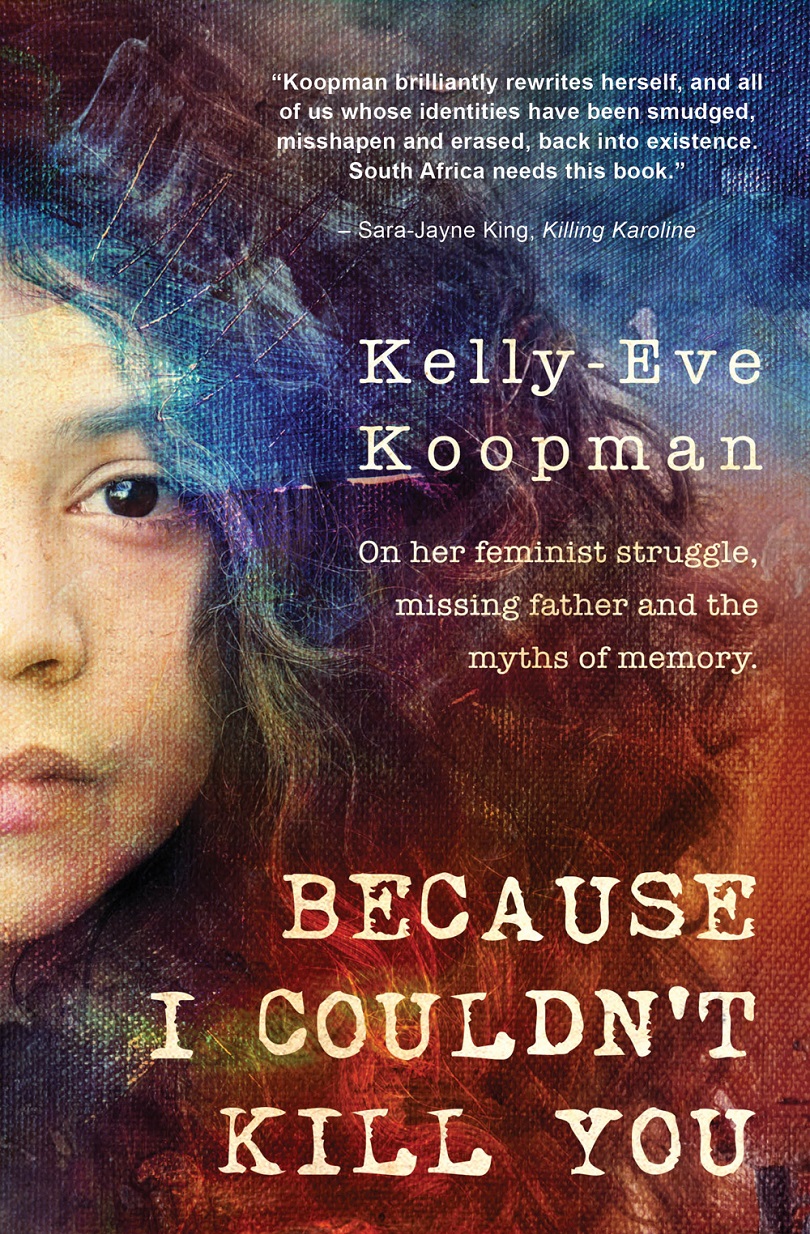 Kelly-Eve Koopman is an articulate writer with an unusual insight into the human psyche. It’s a memoir written as a collection of stories that knit together. She is a well-known feminist and her debut book had its genesis in the search for her father, Andre Christian Koopman, an “embattled, unhinged abusive journalist, “who has never paid a cent in maintenance”, but dogs her daily life, even though she unsuccessfully tries to forget him.

Over the years she has sporadically connected with him. Once at Neighbourhood in Long Street, which has long since closed. She meets him with her partner, Sarah who has a different life story but understands the suspension of living between two worlds. The next time Koopman and Sarah saw him was some years later, when her father’s sister, laying dying in hospital of complications from cerebral palsy. The aunt who was well-liked by everyone died a few weeks later. AJ was tasked with thanking everyone who attended. But he was overwrought and the sight of him dredged up memories that could not be absolved by this devastation of grief. Although his ex-wife, a highly educated woman, still showed compassion perhaps even love for him, despite the years of abuse.

Koopman returns to her childhood home in Glenhaven, not far from the University of the Western Cape, to which her mother dedicated her academic life. She’s back ostensibly to fight writer’s block and it is there, which for 45 years was a Coloureds only suburb as declared by the NP government, that she digs deep into her heart.

The house, called Oasis, belongs to her grandparents. Her grandmother was a respected Sub A teacher, the pinnacle of a Coloured woman’s career at the time; her grandfather started as a worker, rising to be a factory manager when he was able to afford dining room suites,  Christmas presents and a good education for his three bright, lucky children.

The chapters have unusual headings: Do Dinosaurs Have Feathers? Home Invasion, Rainbow Nation Depression, Sunday Lunch, Tupperware and Herztoggies (who remembers them today?), Bad Queer and Soregus: God of the Sky, to name some, appear at first glance to have no relevance to the content. But they are entirely apposite.

Koopman says that she didn’t want to write a “Queer Piece”. She thinks she is a “Bad Queer” because she doesn’t really participate enough in queer social spaces or queer-specific activism. Generally, she writes, when people find out it is a hurtful experience. Although she came out on national television in a documentary, a nausea-inducing “Young People Making A Better South Africa”, watching it with her 80-year-old grandparents in their living room, it came as a cruel surprise that the dreadlocked and tattooed young woman whom they welcomed to their Sunday table was more than a friend.

Koopman’s thoughts are heart-wrenching but it does end on a note of hope – and acceptance, if grudgingly at first by her grandmother. And Sarah is still welcome in their home. The Queer Piece should be read by everyone, it will give you a lot to think about. It should be published as a monograph.

In conclusion, Koopman writes: “I am a goddess, Soregus … I am my mother… I am my grandmother … and all my unnamed and unsung ancestors … I am my partner and my sister…”.

Which is reminiscent of the slogan, Je Suis Charlie, which reverberated across the world in 2015 after Charlie Hebdo, the French weekly, published a cartoon of the Prophet Mohammed and which led to the killing of 12 people by terrorists in Paris.

Because I Couldn’t Kill You is a thought-provoking read and it deserves a place in your library.