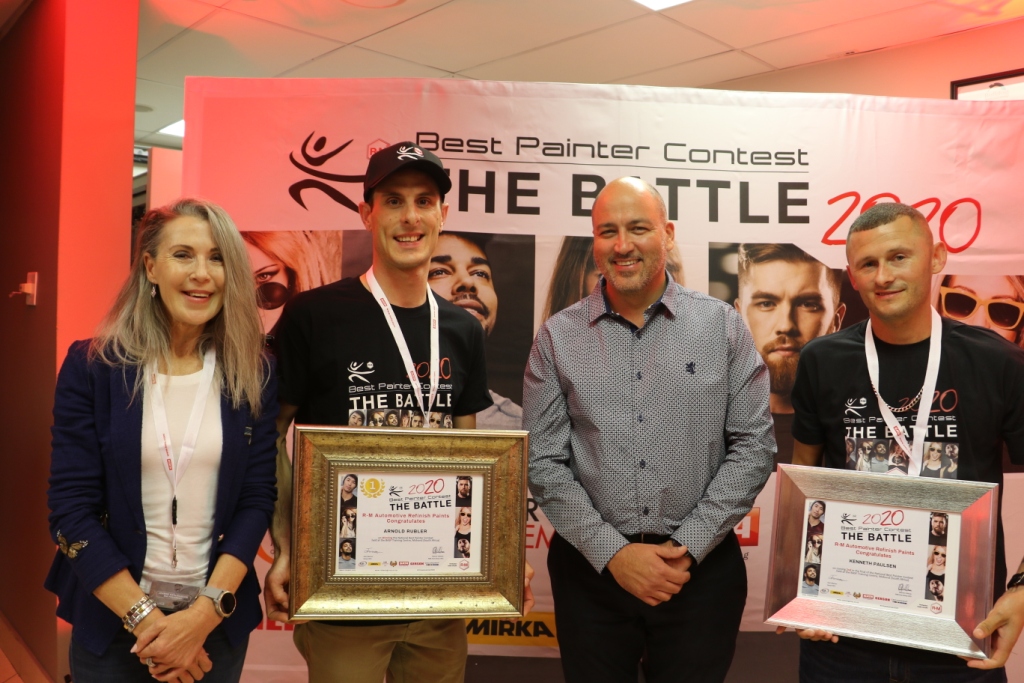 As the 2020 winner, Rübler will represent South Africa at the International Final in France later this year.

Rübler, who works for CMC Auto Panel, part of the Dals Group in Brackenfell, Western Cape, initially thought he was not eligible for this year’s competition. “When I found out that the age limit had been increased from 30 to 35 I realised I could enter. I didn’t expect to win it. I just went in it to give it my best,” he says. Having been in the industry for five years Rübler started out as an apprentice and worked his way up eventually getting to work in the spray booths. “I have fallen in love with what I do,” he says.

Rübler narrowly beat finalists, Kenneth Paulsen who took second place and Chad Arendse who came in third. “These finalists each received a hamper including a SATAjet X5500 spray gun, a Scangrip colour match kit, a rechargeable headlamp and a Mirka mini-file – each hamper valued at R17 000.

The remaining two contestants, Amos Memlape from Soshanguve, Pretoria, a qualified painter at Wonderboom Panelbeaters, and Pieter Smith, who has worked for West Rand Panelbeaters for 15 years, each received hampers worth R13 000,” says Regional Technical Manager for BASF Coating Services and a judge at the competition, Marius Nel.

Nel was joined on the judging panel by BASF National Technical Trainers, Quintes Smit and Timmy Agenbag. “Competitors had to complete three tasks,” explains Nel, “The first of which was to repair a dented, brand-new car bonnet and then to spray paint it in the colour chosen by the judging panel with primer, paint colour and clear coat.”

The judges looked at the processes the contestants followed to get to the end result. “Along with the end result, one of the biggest judging criteria was the efficiency when executing the task. Time is a very important consideration in the refinishing process.”

As the second task, participants were given the side panel of a car including the front fender and door. The front fender required spray painting with a grey primer. “The challenge of the task was that the contestants were given limited information regarding the colour and needed to use the available colour tools to determine a colour match,” says Nel.

The last task included four colour exercises known as the Munsell test. In this test four colour boxes with different coloured chips are provided. The contestants were assigned two minutes per box to arrange the chips according to hue. The chips had numbers on the reverse which, when correctly arranged, will be in sequential order. “All the contestants did an incredible job with these tasks. We congratulate them all,” he says.

Paulsen, who is from CK Tygerberg in the Western Cape and came in second, says he has loved everything car-related since a young age. “I enjoy the challenging nature of painting jobs. The competition has definitely enhanced my touch and will be benefit me as I grow in the industry.” Third place winner, Arendse, a 25-year old from Cape Town working for M & L Panelbeaters, completed a panel beating course after school and then pursued a career in spray painting before venturing into the automotive industry.

“This initiative encourages artisans to sharpen their skills and strive to be the best in the industry,” he says. “It promotes learning as various learning practices need to be put in place in order to take part, such as theory and practical-based assessments.”

Speaking at the event, Jeanne Esterhuizen, President of the Retail Motor Industry Organisation (RMI), said vehicle painting is a scarce skill in the country and a dying skill in the rest of the world. She commended R-M for playing an active role in skills development. “Not only does this competition showcase the advanced skills required to refinish today’s vehicles, it also inspires practising artisans to become the best in their field. This is crucially important to shape a better future for the Motor Body Repair sub-sector. Competitions such as these encourage existing artisans to become better mentors to apprentices in the industry. The exposure of the winner at the upcoming international final in France will equip him with great knowledge, which will add great value to his employer, the youngsters he comes in contact with and eventually to the sector,” she said.