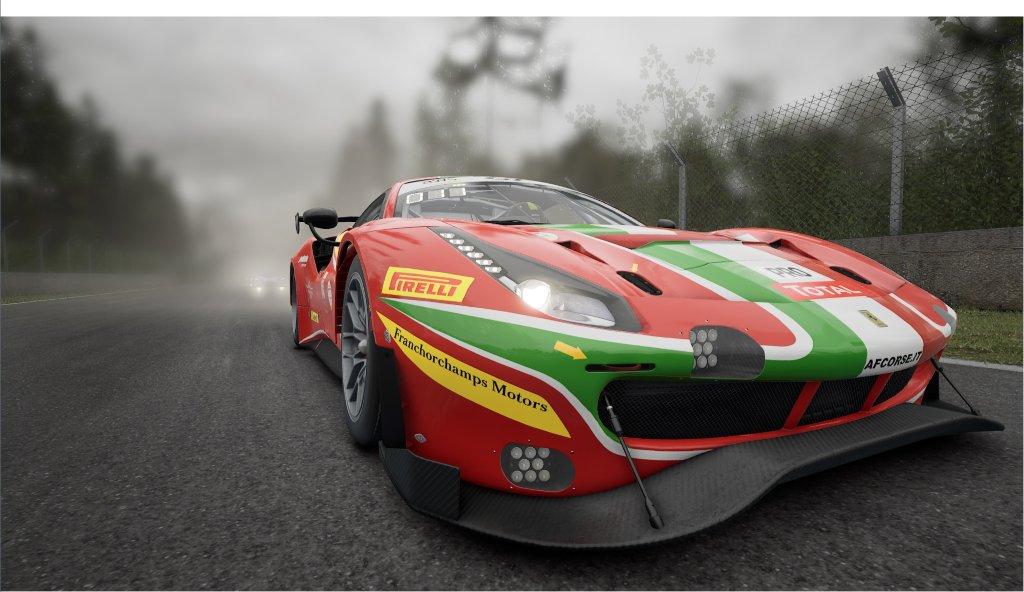 Brian Joss – The sequel is usually never as good as the first one but they were wrong this time. Covering 6 tracks, 165 racers, 5 continents and infinite action, that was what took place during the NEC Global Solidarity e-Race Intercontinental Challenge.

The race week started in Belgium on Thursday 23 April, with Circuit Zolder, the official Hot Lap circuit, where drivers had four days to hone their skills and car setups to ensure they made the Top 100 to progress into the Semi-Final rounds. The Semi-Final tracks were open at the same time on separate servers to that of the Hot Laps and drivers were able to access the tracks to practice and perfect their vehicle setups. Because no one knew which track they would be allocated to should they qualify for the Semi-Finals, competitors spread their practice time across all tracks until they received the results of the lucky random draw which took place on Monday, 2pm. The results were announced via the social media powerhouse that has driven this event from behind the scenes.

Upon this announcement of the completely random draw where drivers were allocated to each of the world-famous circuits, Silverstone, Suzuka, Hungaroring and Laguna Seca, the competitors then had approximately 36 hours to finalise adjustments to the setups they made on their vehicles for the track they had been allocated. During the announcement of the Semi-Finals, the top-secret “mystery track” for the Grand Finals was also announced and the completely separate servers provided by Afrihost, Pure Storage and Data Sciences Corporation, commenced opening to allow the top 100 drivers the opportunity to get some practise and setup time in before the Grand Finals which took place on Wednesday 29 April. A lot of the entrants were expecting it to be one of the 5 tracks already driven on, but race organisers had a surprise in store. In order to stay true to the tag line of the event which is; Intercontinental Challenge, organizers opened up one of the world’s toughest racetracks, the infamous mountain course at Mount Panorama situated in Australia and the home of the Bathhurst 1000 and the scene of many epic Australian V8 Supercar battles in the past.

The final race of that took place on Tuesday evening was a nail-biting battle in the wet at the Zolder circuit for the last two positions of the Top 30 to compete in the Grand Finals. This was the first time that organisers had changed the weather pattern in the Assetto Corsa Competizione game. It proved to be a brilliant move as it resulted in loads of action in the wet.

The Grand Finals consisted of the same format that had been so successful during the first edition of the Solidarity e-Race at Kyalami, including a ten-lap sprint race to open the night’s proceedings, with the random weather setting applied to the race, so no one knew what to expect until they logged into the Grand Final 1 server and entered the game to start racing. Turned out that the virtual Mother Nature, seemed to enjoy the wet race so much, she wanted more and resulted in the Grand Final 1 being a wet affair. The weather conditions did provide incredible action and saw Jordan Sherrat take the win in the rain and the 300gb of data and LTE Router sponsored by Afrihost as his prize. Just like how it happened in the first iteration of this event, the race results of the Grand Final 1 race were used to determine grid positions for the main event, Grand Final 2, where competitors would battle it out for the balance of the R30 000 prize purse.

Prior to the Grand Final 2 race, and to give race control some time to check and review any incidents from Grand Final 1, a separate “Plate Final” took place which gave the drivers who finished in 8th to 14th place a shot at a share of R 3500 of the prize purse on offer. Johnathan Bentz took the honours and beat Franco Albertyn and Kieron Patterson to the line.

“40 mins and 20 laps on Mount Panorama, in real life, is pretty taxing on the body, and in order to win here you need to bring the thunder down under!” said Jordan Pepper, 2020 Bathhurst 1000 winner and one of SA’s finest international driving sensations, who joined Greg Moloney, The Voice of Choice and F1 Sasha Martinengo, just before the main race started to give the over 5.5.k viewers on our social media platforms some first-hand knowledge of the rigours of racing on the “Mountain”.

The relief of the dry weather pattern as the final server opened up was felt by the 30 cars that lined up and rolling around to get the Grand Final 2 start line. The race started with a few incidents taking place in the middle of the pack as they headed up to the NEC mountain straight while the hot contenders seemed to be able to avoid these incidents and continued to do so whilst keeping up the concentration levels required to not hit any walls as they ascended the mountain for the first time. Another added factor for the Grand Final 2 was the introduction of a mandatory pit stop and tyre change, which opened up after the first 5 minutes of racing and closed 5 minutes before the end of the race. Fortunately, all the drivers completed their pit-stops within the allocated window and did so very efficiently which could only lead the organisers to one conclusion and that is, all the drivers practised the pit-stop procedure during their setups sessions. The initial race leader, Sherrat, looked untouchable for a long time until he got into some lapped traffic resulting in a small lapse in concentration causing him to lose control and hit the wall heading into the final sector of the track. This would see Sherrat drop down to 5th place while Zaahir Essa, would now lead the race for the first time. Essa the man who was now leading the pack, of course, finished 2nd at the Kyalami race, was not to be bettered again. Despite a slightly longer pit stop than usual, Zaahir came out of the pits with 10 minutes to go and continued to maintain the lead until he eventually took the chequered flag comfortably ahead of second place, it was a master class by Essa. Sherrat despite all attempts to get back, came up short and saw him losing to brilliant performances by Bentley pilot Mark van Rensburg and the Porsche of Devon Leischer. The two drivers which until this point wasn’t top runners surprised the other racers and viewers with their performances during the closing stages of the Grand Final 2 race.  This was what the organisers had in mind with the varied format of racing as it gave all drivers a chance to be seen by someone even though they are maybe not touted as the best gamer or real racer.

“I was sweating a bit when my pit stop didn’t quite go according to plan, but I knew I had just enough time to get back out and use the new rubber to my advantage. I loved every aspect of this final and it was definitely the right track to host it on, ” Zaahir Essa commented in his post-race interview. He was also ecstatic to have stepped up onto the top step after the disappointment at Kyalami.

So, after another brilliant 7 days of racing the 2.0 version of the highly successful NEC Solidarity e-Race comes to a close, however, another big announcement is expected to come soon where we could potentially see the “Return of the….” as the start of a trilogy. Stay tuned to all media for more news on that, but just as a teaser, how awesome would it be to keep the success of the event going but not moving it from its current social media platform, just adding onto it a fully-fledged television broadcast platform as well.