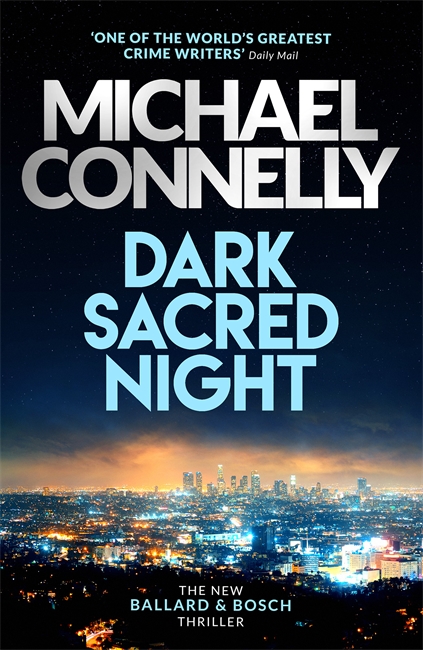 Hieronymus “Harry” Bosch made his debut in The Black Echo 28 years ago when the Los Angeles Police detective was on top form and a case solver of note as evidenced in The Last Coyote, The Poet; City of Bones; The Lincoln Lawyer; and Two Kinds of Truth, to name five in the best-selling series of 31 thrillers. Bosch didn’t stick to the rule book. He disliked bureaucracy and because of some perceived misdemeanour he was forced into early retirement. However, thanks to his half-brother, Mickey Haller, the Lincoln lawyer, he won a substantial pension pay-out, so he is not staring poverty in the face and can provide for his daughter Sam’s college education.

The loner detective is exiled to the San Fernando Police Department where he is digging into cold cases from his office, the former holding cell for drunks, which is when Renée Ballard makes her appearance in The Late Show.

Now Connelly has teamed Bosch and Ballard in a new series, the first of which is Dark Sacred Night. Ballard is an excellent homicide cop but when she lays a charge of sexual harassment against her boss she is sent to work the “graveyard shift” or the late show.

In Two Kinds of Truth Bosch became obsessed with finding the killer of a runaway prostitute, Daisy Clayton,15,  so much so that he has her mother, Elizabeth, a drug addict to live with him and hopefully straighten her out.  Dark Sacred Night opens when Ballard, after solving a particularly macabre murder, returns to Hollywood Division where she finds Bosch looking through a filing cabinet for the notes on the nine-year-old Clayton case.

Ballard is much like Bosch, a loner. She lives in a tent with her dog, Lola, on the beach, and her romantic interest is the lifeguard, Aaron Hayes. When Ballard’s working she leaves Lola at doggy day care. Ballard who doesn’t mind bending the rules, joins forces with Bosch to find a serial killer that has been prowling the streets undetected. The prime suspect is a preacher, John  “McMullen” the Baptist who runs the Moonlight Mission to save the souls of the lost. The walls of his mission are plastered with pictures of his flock, those who accepted the Sacrament.

Although they both dig into old homicide cases they are still involved in active cases. Bosch has to look into the execution of a gang leader in San Fernando Valley which leads him into the jaws of death. And Ballard responds to a call about intruders on the roof of a strip club.

It won’t be a spoiler to say that the pair track the serial killer to his lair and it turns out that it is someone who has been hiding in plain sight. There are some unintended consequences that almost scuttle the relationship when Bosch does something he later regrets.

Dark Sacred Night is a welcome change from the Bosch series during which the old detective, now 70, became more melancholy and introspective as the years rolled by. But it  didn’t dim his passion for getting justice done for the dead. At the climax Bosch and Ballard seal a deal that will see them working together again. Maybe.

Connelly has produced another winner in the Ballard and Bosh series.