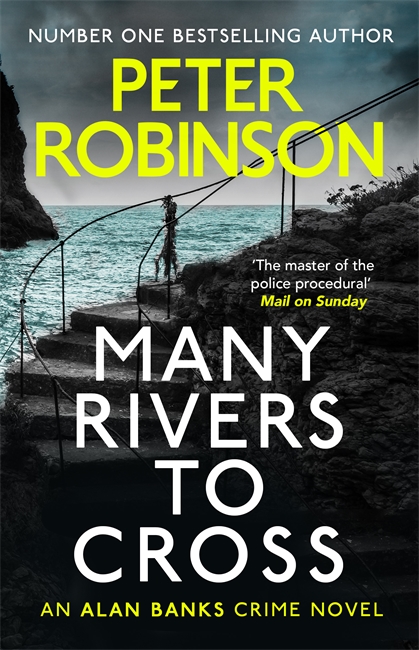 Peter Robinson’s series featuring Detective Superintendent, Alan Banks is the thinking man’s police procedural. While murder, drugs, child-trafficking and seriously bad gangbangers that appear in many of the thrillers, the Yorkshire copper and his team, including Annie Cabbot, DC Gerry Masterson, DS Jackman, use an intellectual process to solve the puzzles, before slipping the handcuffs on the perpetrators.

In the 26th novel the team start investigating the death of a 13-year-old youth, who appears to be of Middle Eastern origin, and has been dumped in a wheelie bin on the East Side Estate. However, he has no identity papers.

Nelia “Zelda” Melnic, a friend of Banks and partner of Raymond Cabbot, a well-known artist and Annie’s father, has a special talent: she is a “super recogniser”. Once she’s seen a face she never forgets it. She is working for one of England’s crime agencies. But she is also constantly searching for the Tadie brothers, Petar and Goran who abducted her when she was a young girl in Moldovia, and forced into the sex trade. But not before abusing her. She’s also looking for Phil Keane, who seduced Annie, and set fire to Banks’s cottage with him in it (Playing With Fire , 2010). Keane who has links to East European crime gangs has never paid for his crime and Zelda thinks her boss, Trevor Hawkins, may have dealings with him so she keeps a watching brief on him as well.

Zelda walks into chaos at the office after her return from aboard where she hears the news that Hawkins died in “a chip pan fire”, which she thinks is highly unlikely. But she is suspected of having a hand in his death.

The team meanwhile think the Middle Eastern youth, still unidentified, may have links to drug dealers through the “county lines” which leads them to Howard Stokes, a disabled addict, dead of a heroin overdose in a “trap house” the mules use to distribute the drugs.

A case of sexual assault that DC Masterson investigated a month earlier is the key that unlocks the puzzle.

The cast of characters include a crooked property dealer; the Kerrigan brothers, two gangsters who have unsavoury figures in many pies.

There is a Neighbourhood Watch run by the prissy Granville Meyers whom DC Masterson questioned after the assault on Lisa Bartlett which occurred in the watch’s precinct. The plot twists and turns in every direction until it leads to the unlikely suspects.

Many Rivers To Cross is a superbly crafted thriller from a master. If you haven’t met Banks/Robinson before, its best to start with his early cases as many of the people play a role in his other books. Some of them are Gallows View, his first one; Innocent Graves; Sleeping In The Ground and Abattoir Blues, to name a few.