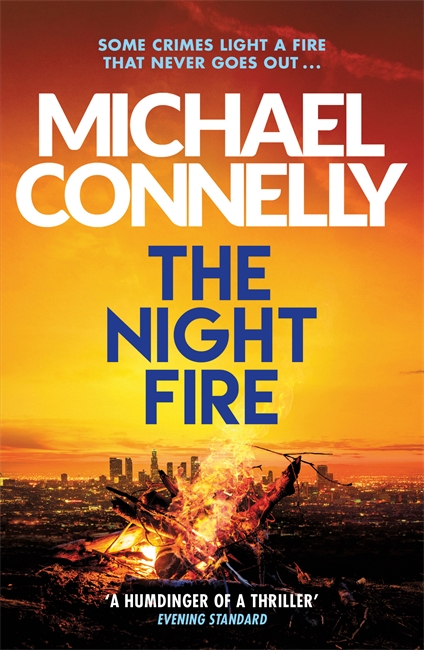 Readers of Dark Sacred Night were left hanging. Although Bosch and Ballard sealed a deal to investigate future cold cases. There was no certainty that they would. They are both rule-breakers and loners and in many ways Ballard is a mirror of a younger Bosch. Fortunately for fans of the new Ballard and Bosch series Connelly has written a second one, The Night Fire, a scorching thriller in Connelly’s trademark style which has made him one of the best authors of police procedurals.

If you have been living in la la land Harry Bosch is a retired homicide detective in his 70s and who has been pricked by the sharp end of authority more than once. Reneé Ballard is an LAPD detective working the “graveyard shift” known to insiders as the Late Show, to where she was “exiled” after she laid a charge of sexual harassment against  one of her superior officers.

The pair are involved in multiple cases: a homeless man living in a tent near Hollywood Recreation Centre is burnt alive; the murder of a judge a few metres away from the courthouse and the suicide of a teenager.

Mickey Haller, the “Lincoln Lawyer” and Bosch’s half-brother is the defence attorney in the judge’s murder case and he asks Bosh to help. Bosch plays a key role in discrediting the DNA found on the alleged killer who is acquitted, another black mark for Bosch in the police corridors.

When John Jack Thompson, a long-time colleague and Bosch’s mentor dies, he bequeaths him a murder book that goes back 30 years. The murder victim was John Hilton, a drug addict and a gay man who spent time in prison. When Ballard goes to interview his partner, Nathan Brazil, he tells her, “You only took 30 years to respond to my call.”

While Ballard is investigating the fire and the teenage suicide during the Late Show, Bosch shows her the murder book and she knows that she should report it that it had been stolen, her inner fire gets the better of her and she helps Bosch who is not very agile since he recently had knee replacement surgery. The thick blue murder file hides a deep, dark secret, that will open a can of worms.

Meanwhile Bosch is distracted by reports of a stalker at his daughter Maddie’s college and decides to keep watch from a discreet distance and calling on former police colleagues to help.

There are many threads to the plot that shoot off on different tangents but Ballard and Bosch finally find the missing pieces of the jigsaw puzzle.

The Night Fire, Connelly’s 33rd thriller, will grip you from page 1.

It won’t be the last book in the series. After barely closing the files on these crimes they are already looking at the next case: finding the killer fof Sarah Freelander whose body was found underneath the Hollywood freeway. The docket was hidden  in a shoebox in Thompson’s closet and is one of many unsolved cases, some of which Bosch worked with his erstwhile mentor.