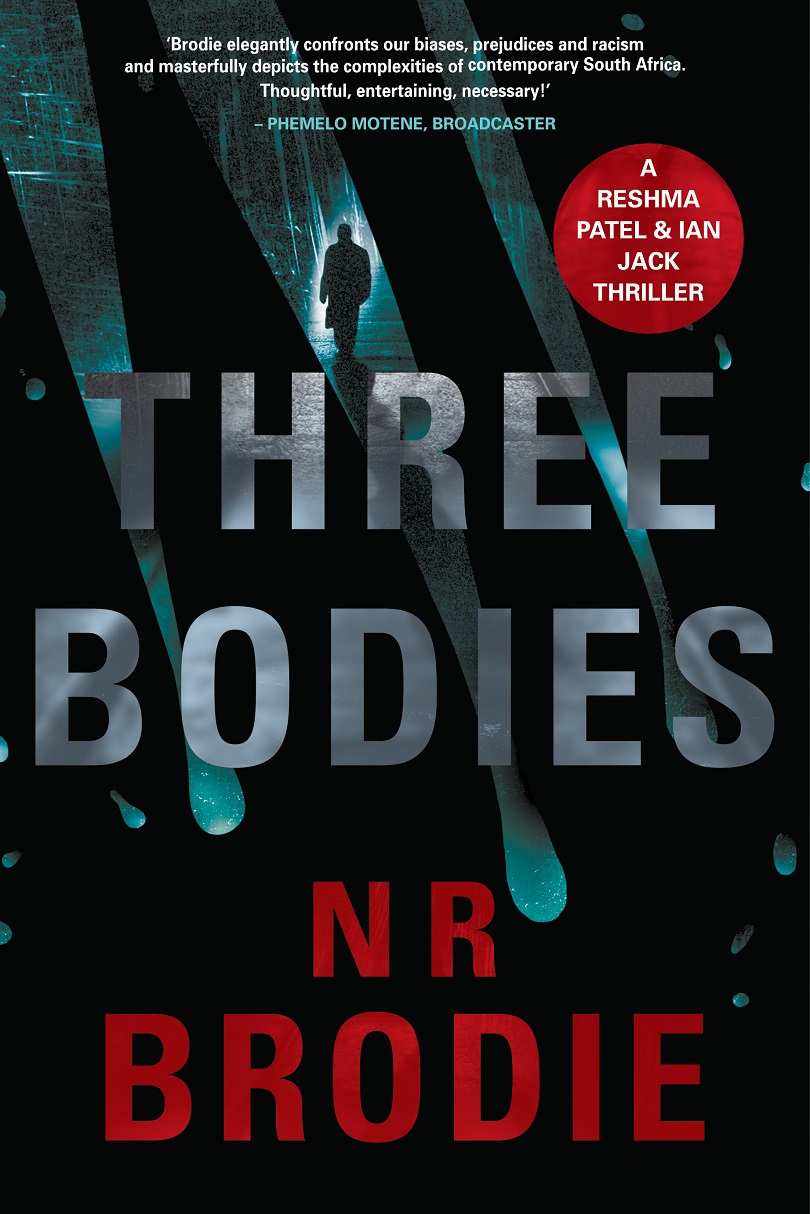 NR “Nechama” Brodie’s second Reshma Patel and Ian Jack thriller is just as good as the first one, Knucklebone (Reviewed June 4 2018), if not better.

This time they are knee-deep in the hyacinth-clogged Hartebeespoort Dam, bordering a plush estate where a friend of Jack’s father, Kobus Myburgh, is managing the security, where one of his employees finds a body of a woman.

The two other women are found in  different waterways, one of them by a group of children scavenging for metal near the Jukskei River and the third at a boating resort on the Vaal River who had her eyes gouged out.

In Knucklebone, Jack a former police detective was working as a guard for Top Force Security owned by Myburgh, while doing research for a  Master’s degree. Now after the discovery of the body Myburgh, who is still steeped in the old ways, asks “Cousin Jack” to do some discreet detective work. And Jack reluctantly agrees even though he is busy with another project involving NGOs. Cousin Jack also has to track down Zebulon, a security guard who has gone awol, and was apparently the last person to see the three women alive who are brought to the estate for “parties”.

Captain Patel is digging into the grimy and gritty underbelly of Park Station and the numerous tunnels that criss-cross Johannesburg while she is investigating a missing person case and she unearths a severed finger. And two bodies next to a stash of money and firearms. When Patel realises the significance of the cache  she hands the case over to an elite covert police unit which she is later invited to join. And her life takes on a different tangent where she is involved in tracking the people responsible for a spate of cash-in-transit hijackings.

However, the discovery of the three bodies still preys on her mind.  She and Jack find a link to the three bodies with the assistance of Surprise Madibela, a university student and the youngest sister of Tiny who died while hunting poachers (Knucklebone). Patel and Jack hired Surprise as a housekeeper in the cottage they now share, to help her to pay her tuition fees.

When Patel begins investigating the case of a supposed missing person who’s not actually missing, in addition to her work tracking the perpetrators of the hijackings, it takes her and Jack even deeper into the dark underbelly of Johannesburg and further afield. Near Park Station at St Mary’ the headquarters for the Mothers’ Union and the Mermaid Bureau, which is new to Patel and Jack. They meet the officious Angela de Bruyn who really has a soft heart and later Eve, at a coffee shop near Fordsburg, where both De Bruyn and Eve who is deeply invested in the Mermaid Bureau recognise the missing woman. The Mermaid Bureau helps trafficked women.

Jack decides to consult MaRejoice, the sangoma who was such a big help to them in Knucklebone, even though Patel is sceptical of her powers.

MaRejoice has plenty of sage advice for Jack, Patel, De Bruyn and Eve, who it appears is a kindred spirit.

In the mix is Jan Snyman, a former apartheid cop who with members of an undercover unit helped to murder union activist Tallboy Moeti and his wife in Mamelodi. Snyman was pardoned by the Truth and Reconciliation Commission, which is where Jack first heard the name. Snyman is now a big-time entrepreneur and property developer and he offered Myburgh the security job. To muddy the waters further a bad sangoma is also involved.

There are some new figures including Wayde Claassen, Patel’s partner in the elite police unit; their boss General “Super”  Sobukwe, who is a bit of a mystery, Eve and Mrs De Bruyn who are sure to feature in the next book.

With a few well-chosen phrases Brodie brings her characters and Johannesburg which forms a big part of the story to life. You can taste the grit and take in the stench of the tunnels which stick to your clothes like leeches.

Three Bodies looks at stories that make headlines: trafficking, gender abuse, corruption, discrimination and cash-in-transit heists  that are all too common in the South African landscape today. There are rumblings of muti killings, water spirits and a mermaid as the children dubbed one of the bodies they found.

There is an explosion at the estate which leads to a most satisfactory conclusion when all loose ends are neatly tied up with a few surprises.

Although Three Bodies can be read as a standalone you should read Knucklebone first as it will give you a better understanding of the key players. You won’t be disappointed: they’re  both gripping reads and as South African as pap ‘n wors.