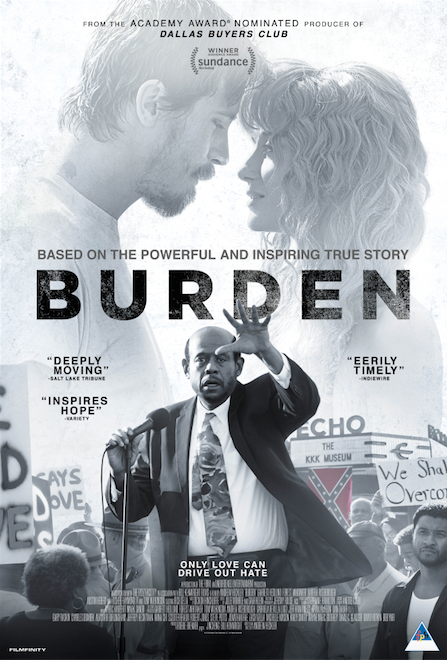 If we have learned anything from the global corona pandemic and the resulting nationwide lockdown, it is that life can change overnight.

But is the same true of people? Can they truly change? A moving new film by actor-turned-director Andrew Heckler, set to be showing on DSTV Box Office soon, tries to answer this age-old question.

BURDEN is a dark tale documenting the true story of Ku Klux Klan (KKK) member Mike Burden, who was raised in an atmosphere of hate and segregation. The film kicks off in 1996 when Mike, along with his Klan family, opens the Redneck Store and KKK Museum in South Carolina, the presence of which is inflammatory to the local black population. When he falls in love with someone who is deeply opposed to his racist views, he is forced to make a choice – one which finds him homeless and unable to find work.

Against all odds, help comes in the form of Mike’s mortal enemy, civil rights activist Reverend David Kennedy. The young man’s life is impacted forever when the Reverend offers to take him into his own home, sending shockwaves through the community. The unlikely pair forms a true bond, forging a path towards redemption and forgiveness as they face down merciless Klan members and sceptical parishioners.

It took more than two decades for Heckler to make his directorial debut with this eyebrow-raising true tale, which he also wrote – he first saw an article about the opening of a KKK museum and shop in 1996. The film finally premiered at the 2018 Sundance Film Festival, where it won the US Dramatic Audience Award.

The story is brought to life by a solid cast. Garrett Hedlund impresses as Mike in a nuanced portrait of a man resistant to change. Loose limbed and dumb looking, his quiet nature hides his penchant for horrific violence and his high-ranking place in the Klan.

Then there’s Mike’s polar opposite. The Reverend David Kennedy, who is expertly portrayed by Forest Whitaker, is a family man dedicated to his faith, and who is committed to always doing the right thing. Versatile British actress Andrea Riseborough plays Judy Harbeson, the young woman who steals Mike’s heart and who helps save his soul.

Hedlund, Whitaker and Riseborough are supported by the likes of Tom Wilkinson, Usher Raymond and Crystal Fox.

While BURDEN is a no holds barred story about race that shows the ugliness of hatred toward our fellow man, it is also about love conquering all. It delivers an incredible and powerful message – true change is possible, but it takes courage and determination to push through the difficult moments change so often requires.

Mick LaSalle, The San Francisco Chronicle’s film critic, sums it up best: “BURDEN is a film of integrity, with something even better than a social conscience. It has a social purpose. If you see it, you’ll learn something.”

The film is distributed by Filmfinity (Pty) Ltd. and will be available on DSTV Box Office soon.